This Netflix movie was released on the video-on-demand streaming service on November 15th and is based on the novel of the same name (2001) by British author Susanna Jones. It stars Swedish actress Alicia Vikander who’s done films in her native Swedish tongue as well as Danish (‘A Royal Affair‘), English and has now added Japanese to that list. She isn’t fluent as many people have reported but just learned her dialogue which it has to be said is quite lengthy in parts. 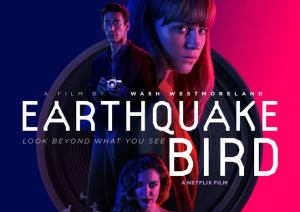 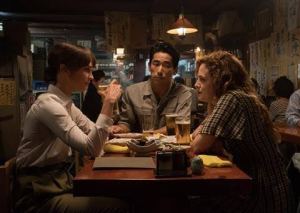 No surprise really given that she plays a translator in the film and so, with the help of a language coach, she managed to pull it off far better than anyone else has ever managed to do. She should be given a lot of credit but it’s not saying too much given the terrible efforts of other Hollywood actors who have had to deliver just a few words in the language.

Before watching ‘Earthquake Bird‘ I had only really seen her in ‘Jason Bourne‘ (2016) and ‘Tomb Raider‘ (2018) so I’m not overly familiar with her work but I thought her portrayal of young female expat Lucy Fly was fabulous. Fly is suspected of murder when her so-called friend Lily goes missing in the wake of a tumultuous love triangle with local street photographer Teiji.

It is a quite dark film but there is shining light by way of Alicia Vikander’s performance. She does an amazing job of depicting the straight-laced but emotionally vulnerable girl living with a burden of painful memories as “death has always followed her around”. She’s forthright and at times abrupt when conversing with colleagues and friends, but she conveys a wide range of emotions throughout the films the 107 minute duration whilst saying very little at times. A myriad of emotions are seen by just gazing into her eyes in the close-up shots.

The story is set in 1989 across two different timelines. In one, Lucy is interrogated by the police over the disappearance, and suspected murder, of fellow expat Lily Bridges who is played by Elvis Presley’s granddaughter, Riley Keough. The story then throws back to how they met and how Lily latched on to Lucy and her boyfriend Teiji (Naoki Kobayashi). Tension builds throughout the film and Lucy grows increasingly jealous and paranoid as Lily and Teiji get closer throughout a range of scenes including a rather surprising nightclub one.

There are many things in their stories that I can empathise with as they really were different times when I too first came to Japan albeit over a decade after this movie is set. It was a far cry from modern life with all the technological devices we now have and it is funny when Lucy asks if anyone brought a camera as they stand and look in awe at Mount Fuji. The same was true of me when I first laid eyes on the majestic mountain. It may be hard for many to believe but people really didn’t take pictures very often in that era.

The fact that it’s set in late 80’s Japan rather than the present day adds a lot more intrigue and appeal for me. I liked reminding myself of those simpler times when contact was made with family back home via letters and phone calls to which Lucy remarks that she likes being cut off. Seeing her teach Lily how to do something simple like ordering a coffee took me back to my early days in Japan.

The opening scene-setter shows three train lines entwining around the Ochanomizu area but, other than the scenes on Sado Island in Niigata Prefecture, I failed to fully recognise any other locales. Far more noticeable are some of the more stereotypical aspects of Japanese culture like karaoke, bonsai, furisode (a style of kimono), onsen and the aforementioned Mount Fuji which may seem like a long list but I felt they were included far more subtly than in other films set in Japan.

I never thought I’d say such a thing but the sex scenes were probably unnecessary in telling this particular story. Typically my wife entered the room during one of them and wondered what kind of movie I was watching! I can’t say I was too convinced by the Teiji character. He may have been mysterious but he wasn’t charismatic and his dark past was never really flushed out fully regarding all the files of photographed women he collected. Did he murder them all?!

Netflix have recently come up with some good art-house films and this is one of them. The cinematography is great and the haunting soundtrack certainly adds to this slow-burn thriller. It’s not for everyone though and the pace of the movie will not hold the attention of some people. Personally, I found it thought-provoking and captivating but admittedly that is purely down to the Japanese connection and actually having a new film to review on Tokyo Fox!

The slightly unusual story is a slow, methodical murder mystery reveal set amidst a love triangle and a constant undercurrent of subtle tension. I quite enjoyed the calmness of the film and there were a few twists but I did feel that it all ended in a flat and quite abrupt way without delivering what had been served up in the first two thirds of the film.