The main protagonist here is a girl who is lost but she is quite far removed from the Charlotte character in ‘Lost In Translation‘ (2003) as this 97 minute tale shows a far darker and grittier side of life in this country which is very different to the more clichéd aspects of society that have been shown in many other films set in Japan. 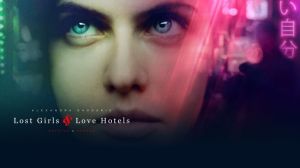 A young, blue-eyed American female called Margaret (Alexandra Daddario) lives on her own in Japan whilst teaching English pronunciation at a Flight Attendant Academy by day and going to dive bars with her ex-pat mates at night followed by some casual sex with strange local men.

This slow moving movie follows the psychologically damaged life of Margaret as it gradually descends further and further. I thought Daddario did a fine job portraying a woman that feels lost and empty inside which results in a series of one night stands as she longs to be wanted….and indeed dominated.

She meets mysterious Japanese guy Kazu (Takehiro Hira) who has a lot of baggage as he is a member of the Yakuza and is also engaged. They embark on an affair and she falls for him but it’s clear that the relationship will never work and she has fallen for the wrong man albeit one that does try to teach her something about the symbolism of Buddha’s womb helping her to let go of her trauma and be reborn.

Sadly, the depth of the script lets the film down as it’s severely lacking in context. Daddario is in pretty much every scene in the movie but we never really get too much backstory or reasoning for what has led to her current state in life. There’s nothing more than a very brief mention of her father leaving the family, her mother dying from cancer the year before and her brother being schizophrenic.

Gradually, Margaret loses herself to the neon lights as she burns the midnight oil and her late night drinking and subsequent love hotel activities are followed up by her losing her job, her best friend leaving Japan, an eviction notice for her apartment and getting a new job as a bar hostess which she finds uncomfortable. Her implosion is seemingly building up (quite literally) towards the climax of the movie but it takes a quite unexpected turn.

This probably all sounds better than it really is as it’s actually a rather dull film with a poor plot where all we get is a lost and depressed girl with emotional issues moving from love hotel to love hotel with different guys. I quite enjoyed seeing the airline academy storyline unfold but the bar scenes don’t add too much, the sex scenes (and there are many!) are not too exciting and I just didn’t find the Kazu character too interesting. That’s probably not the actor’s fault though as international director’s just love to pigeon hole the Japanese which is rarely ever too favourable for the men.

As for some positives, well it all nicely shot and the cinematography will please anyone with an interest in Japan. Some of the scenes are a bit too dark and a range of unique angles are used with some being good and a few others not quite so good. Overall though, this film really doesn’t amount to much more than a load of well-shot images and a moody and atmospheric story lacking a clear and cohesive storyline.