The Ewoks Cartoon Challenge – Binge Watching The 1985 Star Wars Cartoon For As Long As Possible!

Think of the Ewoks and most people will (quite rightly) think of ‘Return Of The Jedi‘ (1983) where their appearance in the Battle of Endor scenes was quite divisive amongst Star Wars fans. What is less known is that the mid-eighties heralded something of a spurt in other Ewok-related content by way of two made-for-TV movies and a cartoon series. 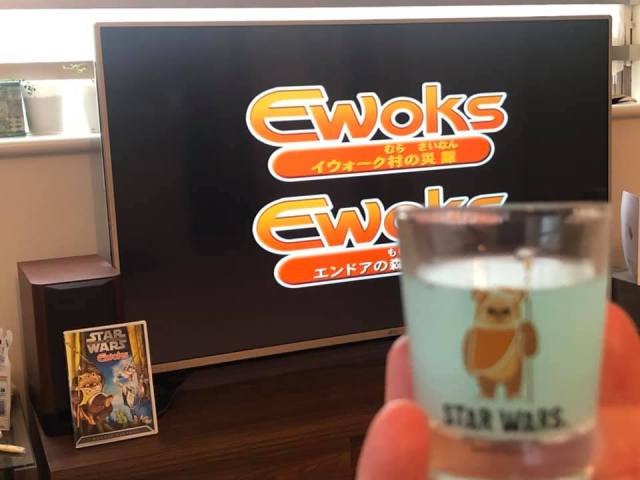 As part of ‘The Ewoks and Droids Adventure Hour‘ on weekend morning TV in America, the former lasted two years and the latter ran for one season of 13 episodes plus an hour long special in 1986. These characters were naturally chosen for their appeal to younger audiences as well as the ability to generate content that didn’t conflict with the Star Wars film storylines.

‘Return Of The Jedi‘ is my all-time favourite Star Wars movie though admittedly that is not based on anything to do with the inclusion of these small, furry guys. I really don’t have a problem with them though which has certainly been helped by the universally loved Warwick Davis who played Wicket. That character is central to the cartoon series which revolves around him, his brothers, parents and friends.

At the climax of my recent binge-watching session of the ‘Droids‘ (1985) series I said that I didn’t really have too much interest in doing a similar thing with the ‘Ewoks‘ one but within a few weeks that had all changed! I never saw these shows in the eighties (they were later shown on Children’s BBC in the UK) so have no nostalgic thirst for them. I did buy a Japanese version of the DVD release for it about a decade ago but never got beyond the first episode! Time to change that, and the only one way to do it was by attempting the Ewoks Cartoon Challenge which was first brought to my attention when the Star Wars podcast ‘Blast Points’ (Episode 45) did it in October 2016.

I don’t think we’ve ever tried it again! They are great in small doses but marathoning them is DANGEROUS. pic.twitter.com/dL8ajiMUyv

My expectations were extremely low as I attempted to watch them all in chronological order via a mix of YouTube and DVD one weekday starting bang on 10 am. My mission was to get as far through all the episodes as I could before losing the will to live! It should be noted that I do have short breaks between episodes sometimes as this was more about just watching as many as possible on the same day. This is basically as close as you can get to writing off a whole day!!

10:02 – I would’ve already been disqualified if this was a serious World Record attempt as I’ve looked away from the screen numerous times already!

10:06 – Is a Dulok (distant cousins of the Ewoks who live in the swamp) rubbing his bottom provocatively? No of course not! It’s just troubled by insect bites! I didn’t expect to see such an image on this show!

10:07 – That cackling villainous laugh tells us this Morag witch is the antagonist.

10:08 – A game of the forbidden game ‘Drop the sack’ inevitably leads to it dropping on the wrong person; in this case Wicket’s mum. I wish I’d thought of this game as a child! In fact, I’d be happy to play it now!

10:19 – Ewoks riding their combat gliders. It seems comfortably familiar in an otherwise unfamiliar show thus far. They manage to save their soul trees from fire whilst up in the sky.

10:30 – The Ewoks’ weapon of choice to save the day is……an invisible bar of soap. “What are we supposed to do? Wash it to death! Haha” is a funny line from one of the little teddy bears. Really.

10:33 – Now I think about it, there was an Ewok soap bar at Carrie Fisher’s home in the Channel 4 show ‘Bring Back…Star Wars‘ (2008). Not sure if that had anything to do with this cartoon though!

10:47 – Dare I say it but I find myself quite captivated by this silly soap storyline.

10:54 – One of the female Ewoks talks of holding hands. Who wrote this filth?! It’s supposed to be for kids……and bloggers in their 40s!!

11:02 – King Gorneesh of the Duloks has to change the baby Phlog’s nappy. A funny scene.

11:04 – “Yub nub”. Ah proper Ewok lingo at last. All this English language is quite strange to hear given their lack of it in ‘Return Of The Jedi‘, and certainly the first of the Ewok TV movies!

11:12 – “May the……light speed go with you!” is about as close as we’ll get to anything Force-like. This is already starting to feel like homework rather than being fun!

11:17 – “Finally some serious action” says someone. No such luck. It’s just the Ewoks fishing!

11:27 – You’d think it’s Stormtroopers firing at Wicket and his friends as every single shot manages to miss them.

11:46 – “Welcome to the greatest show on Endor” says Bondo, the leader of the Jindas wandering minstrel show. Given that this show is set before the original trilogy of films he may be right. It’s really not that great though at all!

12:01 – Logray’s magic seed turns into a big octopus and saves the day! An example of the never-ending magic in this show. Logray is the Shaman of the Ewok Village and was the one responsible for almost sacrificing Luke, Han and Chewie for C3P0 in ‘Return Of The Jedi‘.

12:30 – This is the first episode being watched on my laptop via YouTube and I get to hear the slightly strange Ewoks theme tune (done by blues artist Taj Majal) for the first time.

12:36 – A suspension bridge crossing over icy waters. It’s a little Indiana Jones-like. What could possibly go wrong? Oh not so much actually in this kids show!

12:44 – Now it’s the valley of floating trees. “How are we gonna get across that?” is said by one of the Ewoks. No suspense here though as they’re soon on their way without too much incident. 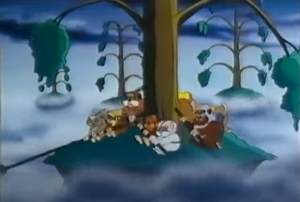 12:48 – The Yub-Nub’s are becoming more common. It supposedly means hooray but doesn’t always seem like that’s the appropriate word to use!

12:52 – The magic of this series is never ending. Wicket manages to replenish the all-important Tree of Light (and most of Endor it seems!) with some magic dust.

12:55 – This is more like a nativity play than Star Wars! The Ewoks escape by basically dressing up in a long caterpillar-type monster costume. 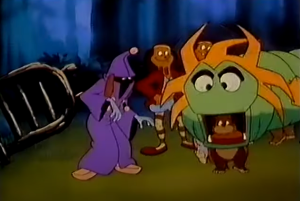 13:02 – I’m sure that sounded like Master Earl Grey. I eventually realise it was just Logray (pronounced more like low gray) who is actually a recurring character. Seven episodes in and I’m still not sure who is who!! Maybe it’s just a sign that I should make some green tea.

13:08 – The magic stone turns out to just be a Giant’s missing tooth. He puts it back in place, feels better and is appeased thereby lifting the curse.

13:26 – Wicket and Co. agree to help their Leprechaun-looking Gupin friend who saved Wicket’s dad’s life in episode 4. Favours always have to be returned!

13:28 – A different setting at last as the action moves to the Endorian Grasslands which actually look like a desert.

13:35 – Finally an Ewok party and celebration! You can’t beat them! It’s not the same though without the Yub Nub song from the original ‘Return Of The Jedi‘ edit so I give that a quick blast! May as well play the Victory Celebration theme which replaced it too. I love both and my Ewok spirits are immediately lifted.

14:01 – Sweep the hut, wash the gourds, dust off the masks is what Master Logray tells Teebo who wants to be his apprentice. Shades of the Karate Kid!! With that in mind, it’s probably time to crack open my ‘Survivor’ energy drink as the band ‘Survivor‘ contributed ‘The Moment of Truth‘ to the aforementioned film. A tenuous link I know!! 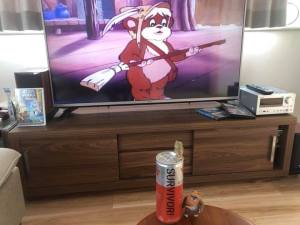 14:10 – “I have a bad feeling about this” says one of the female Ewoks. Probably the first sign that this show has anything to do with Star Wars!

14:21 – The Ewoks thought they’d never see Master Logray again but that was never going to really happen as he lives to fight another day.

14:24 – Building a wagon sure builds up an appetite says some character who I don’t know! It sure does! I’ve eaten a load of snacks just whilst watching it being made!

14:27 – All these Shaman mentions make me think of 90s British electronic dance music band The Shamen. Suddenly I’ve got ‘Ebeneezer Goode‘ and ‘Move any Mountain‘ in my head!

15:10 – The “comedy” and cuteness have been ramped up in this episode with the introduction of the Trome triplets. And some people thought the teddy-bear style Ewoks were annoying!!

15:19 – Slapstick comedy and the snake things continue to gobble up the acorns (laced with a potion) and succumb to their fate one by one. Surely they’d realise by the end that it’s maybe not a good idea to eat them!

15:42 – Someone talking to himself and explaining the plot! So far this episode isn’t living up to what was promised by what was the working title for ‘Return Of The Jedi‘ in order to disguise production from fans and press alike. It was also the name of the ‘Family Guy‘ (S06E01) parody episode.

15:45 – Giant Phlog Hoona falls in love with Wicket having accidentally had love potion poured on her. Wicket’s a real boy and doesn’t like the affection but is told he can’t escape or she’ll ruin the village looking for him.

15:49 – “Say goodbye to your village. This is the end of the Ewoks. Mwhahahahahaha” says some antagonist or another. Of course, that never happens.

16:00 – There’s nothing like the peace and quiet of the forest is there? Not for long I guess!

16:08 – Snowfall in the woods as Wicket and Kneesa go in search of the latter’s long lost sister Asha; the wild red haired feral Ewok nicknamed “the red ghost”.

16:11 – The most emotional sister moment since those scenes involving Luke and Leia.

16:17 – An axe-wielding Ewok! Surely that goes against the principle of the no weapons/punching/hitting philosophy of the series.

16:20 – “I’ll get you red-haired one. We’ll meet again and when we do…” says the Dulok as he tumbles off a mountain… but presumably not falling to his death as this is a kid’s cartoon!

16:21 – There’s another season?? I did know that of course but I’m all Ewok-ed out and this is where I bow out of this challenge. As poor as this series has been, I have to admit that it has had it’s moments and overall has just about bettered my expectations. Of course, it’s a far cry from the excellent ‘Clone Wars‘ and ‘Rebels‘ shows. To be fair, it probably can’t even compete with ‘Droids‘ which makes it all the more mysterious why only ‘Ewoks‘ was given a second season!

The two hosts of the aforementioned Blast Points podcast set about watching these episodes separately with one giving up after five episodes and the other completing all of season one. I now wish I’d brought the Ewoks cartoon t-shirt design which came out in Spring 2019. I’d be able to wear it with pride knowing that I’ve sat through all of season one of the Ewoks cartoon. I may not have taken too much in but I certainly sat through it all!

On paper, watching about six hours of retro cartoons really doesn’t sound too difficult a challenge. However, the ‘Droids‘ series taught me that this is all a far cry from binge-watching a modern day TV series or a few movies in one go. It’s tougher than you think as the content does not exactly have you on the edge of your seat so remaining focused is not easy! I can’t say I am even thinking about viewing the second season of this ‘Ewoks‘ series but history has taught me that I should never say never!

8 Responses to The Ewoks Cartoon Challenge – Binge Watching The 1985 Star Wars Cartoon For As Long As Possible!