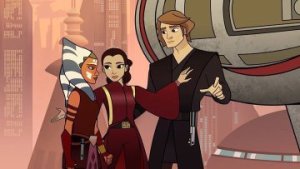 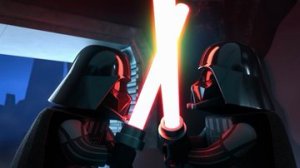 In the last five years it’s become custom to spend the Autumn and early Winter working my way back through all the theatrical Star Wars releases in anticipation of new films in December. However, ‘The Rise Of Skywalker‘ (2019) was the last one for now so wanting to find some kind of replacement this year I decided to finally watch or re-watch the lesser known releases. 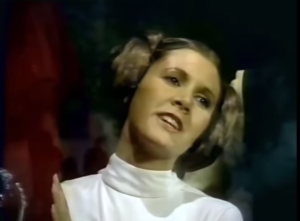 Tell any Star Wars fan that the follow up to the original movie is terrible and they’ll probably be extremely shocked. We’re not talking about ‘The Empire Strikes Back‘ (1980) though as this is the infamous ABC television special. We see an unrecognisable Mark Hamill, Boba Fett’s first on-screen appearance, Princess Leia singing “Life Day”, the debut of Kasyyyyk and meet Chewbacca’s family except we have no idea what’s going on or what they’re saying as there are no subtitles and Han isn’t around to react or translate what’s being said. This isn’t just a short segment either. It goes on for quite a while. It all really is quite bizarre and one can’t blame George Lucas for wanting to rid the world of it!

If you hadn’t seen ‘Return Of The Jedi‘ (1983) before watching this then you wouldn’t even know this was a “Star Wars” movie! I use the air-quotes there as nothing here really connects the theatrical versions which preceded it. Well, Mace’s (Erik Walker) outfit slightly resembles the orange X-Wing pilot uniform but that’s about it. Narration tells us what is happening but it’s all rather uneventful. There are some stop-go motion monsters and a bit of magical stuff but unless you have some nostalgic attachment then it really is quite dull. 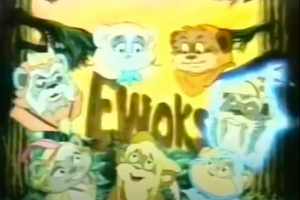 Who are these fraudsters? They’re not the Ewoks we know from the movies! This cartoon series revolves around Wicket, his brothers, parents and friends who can suddenly all speak English. This kids series was rather strong with magical elements as the series outline had a strict set of guidelines involving no blasters, limited physical contact and accidental fires only! It is severly lacking in things that most people enjoy about Star Wars! More details here 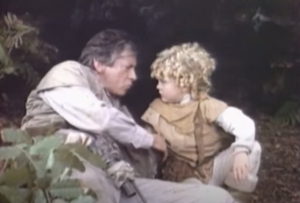 The second made-for-television film specials sees far more action but be warned that it is a quite dark start as Cyndel’s family are all killed early on including her dad who is Bruce Willis’ nemesis on the police force in ‘Die Hard‘ (1988). She amazingly gets over it all very quickly thanks to the ewoks who can communicate in English far better than the first movie. There’s a lot more wandering in the woods in this one but at least there’s also a spaceship of sorts and some swinging ewoks as the battle takes place. 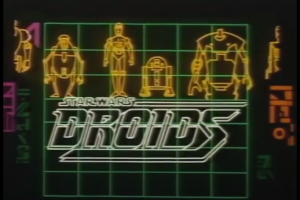 The other part of ‘The Ewoks and Droids Adventure Hour‘ on morning TV at weekends in America was this far more tolerable animation. It looked like Oscar-winning material compared to the Ewoks series which one got extended for a second season whilst this one was binned off! Artoo and Threepio move around the galaxy going switching owners a few times. Cameo appearances from Boba Fett and IG-88 were highlights in a series lacking any real depth. More details here 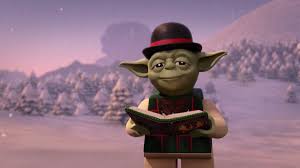 It was quite a surprise to get this episode, and I’m not sure whether it really erases the horrors of the original holiday special! I was pretty disappointed by this given how impressive the other Lego Star Wars specials have been. It was OK but a lot of the jokes felt quite tired and a little bit bland. The story revolves around Rey travelling to a Jedi Temple to gain a deeper knowledge of the Force but she accidentally ends up time travelling across various eras as she hopes to make it home in time for Life Day.

A much forgotten about series featuring some great, epic moments relating to Anakin’s turn towards the dark side. There’s a lot of love for this micro-series, notable for introducing ‘Revenge Of The Sith’ villain General Grievous, but I thought it didn’t quite live up those expectations which in fairness is probably down to my love for the CGI Clone Wars series. It’s still deserving of any fan’s time though.

Quite good but not as good as many have said! Some great, epic moments relating to Anakin‘s turn towards the dark side! An underrated show maybe but not on the same level as the CGI show which recently finished.

More Lego action as this series follows the young Freemaker siblings; Rowan, his sister Kordi, their brother Zander and battle droid R0-GR. They salvage parts from destroyed or damaged ships in order to build new ones, which they sell to make a living in their shop aboard a space station. The story lines were pretty good, particularly those involving the mysterious Force wielder Naare.

Short 2D animated sketches (under three minutes) on Disney’s YouTube channel that centre around the female characters from multiple eras. There are 32 episodes in total across two seasons. They’re not all amazing but there are more hits than misses with some of them filling in (not so important!) little gaps in the franchise.

A clever piece of animation presenting Star Wars in Lego fashion, and written by Michael Price who has slipped in some great nods to the original movie trilogy even though it’s all set in the prequel timeline. It is geared towards kids but is great fun and has some genuine laughs for adults too. The real star for me is Trevor Devall’s voice narration of Emperor Palpatine who has some hilarious scenes with Darth Vader. 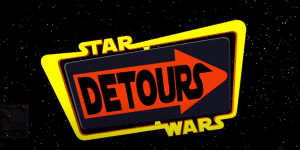 40 episodes of this parody series are supposedly already in the can waiting to be released but it got axed not long after Disney bought LucasFilm in 2012 as it presumably didn’t fit in with their vision for the sci-fi saga. Or maybe it was just because it didn’t include any of the new characters like Finn, Rey, BB-8, Kylo Ren and so on.

Other non-official Star Wars-related shows worthy of a mention are the Robot Chicken special, three episodes of Family Guy (S06 E01 – ‘Blue Harvest‘, S08 E20 – ‘Something Something Something Dark Side‘, S09 E18 – ‘It’s A Trap‘) and The Simpsons (S10 E09 – ‘Mayored To The Mob‘) featuring Mark Hamill.

Of course any sane Star Wars fan wanting to embark on a viewing marathon would choose one of the main feature films, and after that the excellent ‘Clone Wars‘ and ‘Rebels‘ animated TV series would provide a fine alternative but if (and admittedly it’s a big “if”) you want to see some non-Canon Star Wars stories from a more innocent time then the above playlist may just be for you! Sadly, there is no new Star Wars movie at the end of all this build-up but thankfully there has been season 2 of ‘The Mandalorian‘ on Disney+ to fill the void, and with the recent announcement of forthcoming projects it seems that Star Wars content will continue to be churned out. Hopefully the benchmark is set much higher than the contents of this top 10 post!

Click here to read ‘The Ewoks Cartoon Challenge – Binge Watching The 1985 Star Wars Cartoon For As Long As Possible!’

The #LEGOStarWarsHolidaySpecial was overall a bit disappointing for me! It’s ok but nothing special. It has some good moments but they’re few & far between. It is better than the original 1978 holiday special though, I’ll tell you that!! #StarWars #Lego pic.twitter.com/MKmUrkNbBR