Viewing The Iguana-Like Crane En-Route To Odaiba By Bicycle!

Construction work is often a menace to tourists who have their perfect picture postcard moments ruined by the sight of some scaffolding. This structure though has become quite the spectacle though due to it’s interesting appearance! Usually the sight of a large green lizard-like structure in Tokyo means one thing only but for once this has nothing to do with Godzilla! 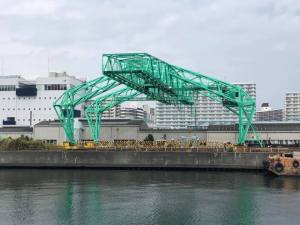 Sandwiched between the Sumida and Arakawa Rivers is this green crane which gives off the appearance of an iguana due to it’s low crouching position and four legs.

It’s actually owned by the Tokyo Rail Center and moves up and down a stretch of the Shimoi Canal on a kind of rail line. It’s a replacement for a pale mint green one that was dismantled at the end of 2016. It’s not possible to access the premises but it can be seen very well from the little park area on the opposite bank just outside Tokyo Bay Shiomi Prince Hotel, located just a couple of minutes walk north of Shiomi Station on the JR Keiyō Line.

Whilst I was in Koto Ward I decided to push on west for a further seven kilometres or so. Odaiba was my destination and the 115-metre tall Daikanransha (Ferris wheel) at Palette Town was the first landmark.

Sadly when I went the five Olympic rings had been removed from the foreground of Rainbow Bridge but they have since been reinstalled. This 570 metre-long suspension bridge is quite the spectacle at night but nothing too special in the daytime. The other things which usually come to mind when thinking of Odaiba are the Fuji Television building and the slightly tacky 12.5 metre Statue of Liberty replica which was erected in 2000. 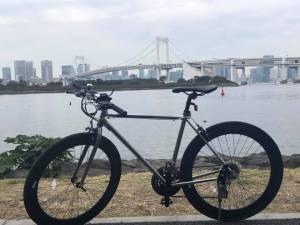 The huge Gundam statue outside Diver City mall has been around for ages now but I had never seen it for real until this particular day. As it is, I still don’t really know anything about Gundam but it is an impressive sight and fits in with the futuristic image many people have of Tokyo and Japan. Anyone who has been here though knows that such a stereotype is generally very wide of the mark!!

Megaweb Toyota City Showcase provided an entertaining short break from the cycling, with my main point of interest being able to see a DeLorean without any of the time-travelling props and accessories added to Doctor Emmett-Brown’s ‘Back To The Future‘ time machine.

The journey home began after that but there were a few photo-stops along the way. First up was the 101.1 metre-high Tokyo Baycourt Club Hotel and Spa Resort (3-1-15 Ariake, Koto-ku) which was completed in 2008 after three years of construction and was totally new to me.

Not far beyond that was the Tokyo Big Sight (3-11-1 Ariake, Koto-ku) convention centre which I’ve never actually been inside. It was originally brought to my attention following it’s appearance in the ‘#thatPOWER‘ (2013) music video from Will.i.am and Justin Bieber. 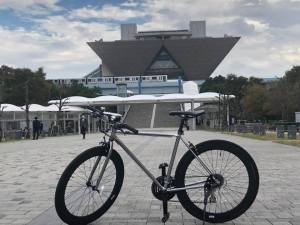 A couple of the Tokyo 2020 (but in 2021 all going well!) Olympic venues next. Should the games actually go ahead then the Tokyo Aquatics Centre (2-2-1 Tatsumi, Koto-ku) state-of-the-art 15,000-seater, unveiled in October following delays due to the global pandemic, will host all the swimming action.

Ariake Gymnastics Venue (1-10-1 Ariake, Koto-ku) has 12,000 seats and will be the home of the gymnastics events. It was originally going to be knocked down after the games but will now remain for a further decade to increase the legacy of the games for the city and residents. The building is primarily made of wood in the name of sustainability with a nod to Japanese traditional style too.

Another sporting venue which I’ve been to a fair few times is the Ariake Collosseum which hosts the Toray Pan Pacific women’s tennis tournament every Autumn as well as the Rakuten Open men’s competition too. 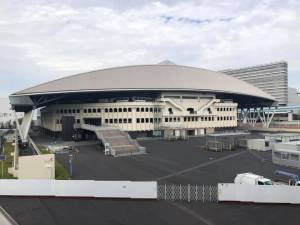 It was a long journey back to the Tokyo Fox Global Operations Centre in Itabashi-ku from there but I was very satisfied with what I’d seen and done that day during this 50 kilometre bike ride whilst having the added bonus of burning off 1500 calories!

Click here to read ‘The Best Place In Tokyo To See A DeLorean Car (& For Free!)’

Click here to read ‘Dining Out: The Godzilla Hotel In Shinjuku’

2 Responses to Viewing The Iguana-Like Crane En-Route To Odaiba By Bicycle!