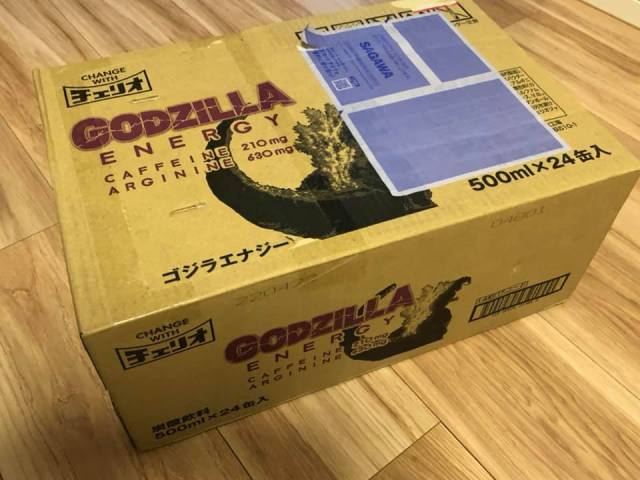 Anyone who has ever seen any Godzilla movie will know that the fire-breathing radioactive lizard is a pretty powerful kaiju (monster) with a wealth of energy and now, thanks to beverage maker Cheerio, you can possess a fraction of that energy (*) thanks to this new drink which went on sale at the end of April in the likes of Kyushu and Okinawa via vending machines. It’s sadly not being sold in Tokyo but it is available online in bulk so my friend Mak (of Maction Planet fame) and I went halves on a pack of 24 cans. 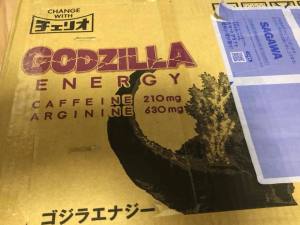 Within a few days of placing the order online, the box was delivered to the Tokyo Fox Global Operations Centre in Itabashi ward. Unlike energy giants Red Bull and Monster, it comes in a 500 ml can which is actually quite rare for Japan where the 350 ml one is most common.

The artwork consists of pink lettering on a dark background but the fire-breathing monster destroying part of the barcode isn’t what is seen in ‘Godzilla vs. Kong’ (2021), but is the one from ‘Shin Gojira‘ (2016) which was the last Japanese-produced live-action film in the franchise.

The ingredients include 210 milligrams of caffeine and 630 milligrams of arginine amino acid which is more than the major energy drinks deliver. Hopefully the extra caffeine won’t result in the drinkers destroying cities but will just help them get through a long day or whatever! I’m not sure if my pictures really show the true colour of the liquid which is a rather vivid purple drink.

The taste was sweet and typical of the original energy drinks. With another 11 cans to my name it was quite a relief that it was to my liking! I thought my tongue may have become a much darker shade due to all the colouring in the drink but there was no change there. Not quite atomic breath but you could certainly smell it on me afterwards as is often the case with such chemically-filled drinks!

Bonus: The aforementioned ‘Godzilla vs. Kong‘ movie saw the two most powerful forces of nature clash in an internet release earlier this year. Nothing much more to say than what is in the tweet below but will add that the young deaf girl was an intriguing character and perhaps the only interesting human one but I’m guessing that most people don’t watch such a film for that and just want to see some epic monster fight scenes.

Watched #GodzillaVsKong last night. I’d give it a 6 out of 10 I guess! CGI looked good. Maybe that’s enough for some fans but you still need some kind of coherent storyline & characters to care about!

That did remind me of the King Kong Family Mart building in Sangenjaya which I hadn’t seen since cycling the Godzilla Tokyo rail…in one day back in July 2014. This is the photo from that visit but I am happy to report all is the same seven years on.

The last time Godzilla featured on this site was back in December of last year when I captured a better shot of the shrine below which appeared briefly in ‘Shin Gojira‘ (2016).

Two Godzilla-related places I’m yet to go are below. They are the Godzilla shaped rock in Akita prefecture and…

#Godzilla Rock in #OgaCity (#Akita prefecture) – sadly I didn’t know about this until a few hours after I’d left the area! Annoying! Definitely one to consider for my next trip up north!
(NB: Pic is definitely not mine! It’s been “borrowed” from google images!!) #gojira pic.twitter.com/A94FEMQdku

…the Godzilla theme park of sorts which is located on Awaji Island, southwest of Kobe and Osaka.

Click here to read ‘Dining Out: The Godzilla Hotel’