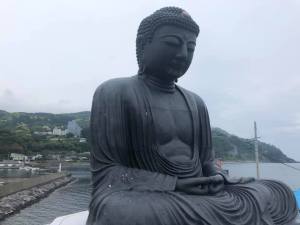 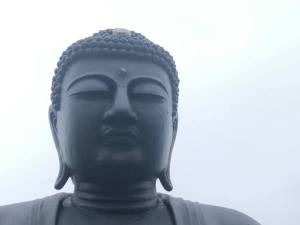 The 88 temples of Shikoku is a fairly well-known pilgrimage done by about 300,000 people each year but little did I know that there is a lesser one of similar nature in an area of Shizuoka Prefecture which has existed since the Edo Period (1603 – 1867) and is spread over 13 cities and towns.

Such pilgrimages are not really of interest to me right now (never say never though!) but it did bring a couple of notable places into my consciousness. One such example is Shojoji Temple (833-1-1 Inatori, Higashiizu, Kamo-Gun, Shizuoka-ken) which is the 33rd of the 88 temples in Izu Peninsula. For the record, the first temple is Reisho-in (in Tazawa) and the end is at Shuzenji Temple (Shuzenji). This site has more details.

The Golden Week holiday at the start of May was mostly spent at my in-laws` house in Ito but I did manage to get out by myself at the end of the week for an afternoon. My destination of choice was Izu-Inatori Station. From there it is a 12 minute walk to the temple and as soon as you hit the coast you can see the big Buddha statue across the water. 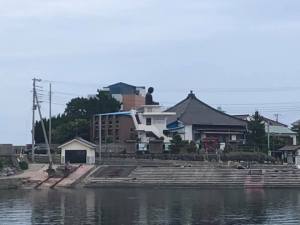 There was no sign of anyone else as I wandered round to the temple grounds located on a street corner. Torii gates are usually linked to shrines but temples built before the Meiji Period (1868-1912) also have them which may explain why there is one at Shojoji. 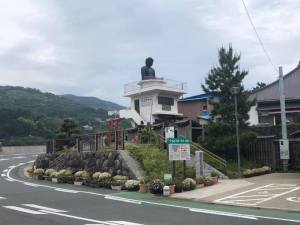 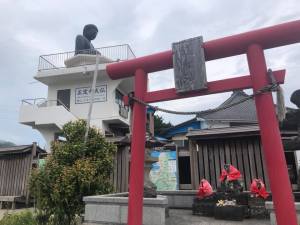 Finding a way inside was not so straight-forward and I had to head back down the road a bit to find a way in but even then I was not so sure if the temple I was entering would actually lead to the Buddha. At first it just seemed like it was a regular non-descript temple with an eclectic mix of statues out the front. 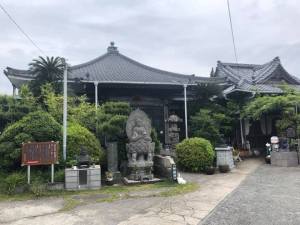 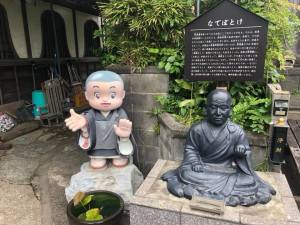 There was a gate to the side which thankfully opened up and the two-story building came into sight from beyond the giant bell. 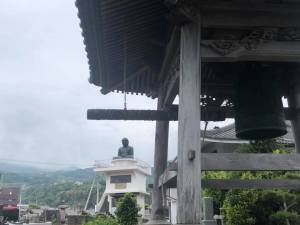 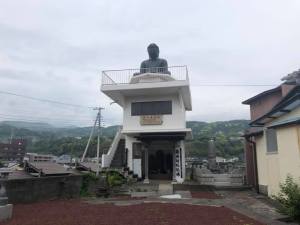 There was no hanging about as rain was fast approaching so I ascended the steps and very briefly popped into the room upstairs before continuing to the top. 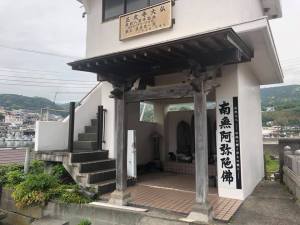 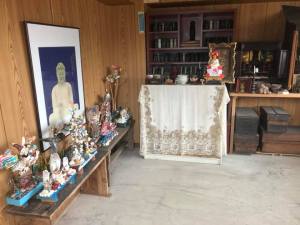 It was a classic-looking Buddha statue but sadly I couldn`t find any information about it anywhere. All I can tell you is that it is black and three metres in height. The viewing platform does offer some fine views of the town and the port. 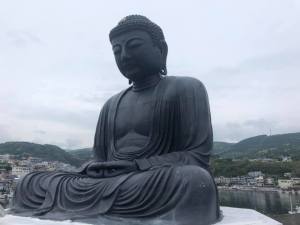 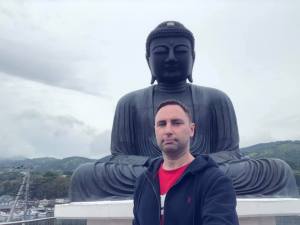 People usually visit such temples for health improvement or to obtain spiritual energy but not surprisingly I wasn`t schooled in Buddhism or enlightened. However, I did leave the place very happy that I had visited something I`d never seen anywhere else online. 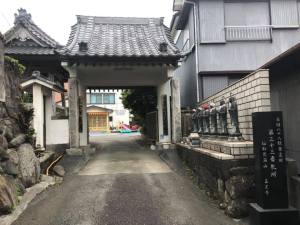 Happy is a very apt adjective as shiawase (happiness) is a word heavily related to the Izu 88 temple pilgrimage but I`m really not sure why to be honest! Shojoji Temple is just one of the 88, and it the first I`ve encountered but will it be the last?!

Click here to read ‘This Museum of Art Is Not Easy To Get To & You’d Buddha Believe It!’