Dining Out: The Ramen Considered To Be The Best In Japan

At the start of this year I went the short distance from the Tokyo Fox Global Operations Centre to Nakiryu in Toshima-ku which is one of the world’s cheapest Michelin starred restaurants. That was great but the noodles often rated as Japan’s most delicious are at a little family-run place about 450 kilometres away.

I’d love to say that I made a pilgrimage to the spiritual heartland of Japan’s ramen world but the fact is that I was completely unaware of it until a couple of weeks before my trip when my friend Neil suggested going there and subsequently sent me this BBC link about it.

Ide Shoten is the name of the restaurant and it is just a six minute walk south of Wakayama Station. It was named as the nations tastiest on a New Years Day TV show in 1998 and hasn’t looked back since then. We thought we might have to wait for a bit to sample the award-winning noodles but that wasn’t the case at all which is not too surprising in a city of just 360,000 residents. Mind you, the majority of customers are usually tourists like myself! 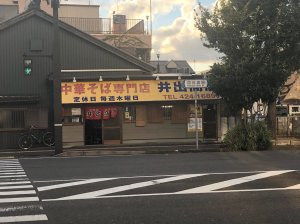 The facade was very basic with a solitary red lantern hanging beneath the old yellow and rid signage. Appearances can be deceiving though and I thought it’d be a bit more fancy inside. How wrong I was! Luckily I like simple, humble places and this cosy little restaurant was certainly that with a cramped kitchen and a small eight-seat table in the centre surrounded by 10 counter seats.

We took a couple of seats in the corner just after 6pm on a Sunday evening as it began to fill up, and by the time we left half an hour later a sizeable queue had formed outside. Good timing! Amidst the messages from famous customers on the wall was a simple menu with the basic ramen dish (a.k.a chuka-soba) priced at a very reasonable 750 yen. Over 500 of these dishes are supposedly sold each day.

Neil ordered us a Tokusei Chuka Soba (extra pork slices!) with a soft-boiled egg which I expected to be placed in the dish but it was served in a separate dish. It’s not exactly difficult to add the egg but I guess I’m used to it being sliced by the chefs and placed atop the noodles for a more aesthetically pleasing look. 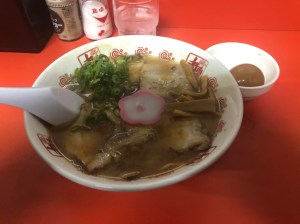 By the time I’d set up and taken my photos, Neil had already devoured most of the content within his white ceramic bowl. I can’t eat really hot food anyway so my untouched dish was still full of firm noodles, soy sauce broth, green onions, a pink fish cake, bamboo shoots,  slivers of chashu (roast pork) and no doubt some other condiments and garnish which I didn’t notice!

As for the taste, the soup broth (as ever!) was the standout highlight for me. It was rich and thick with a strong pork taste, the base of which is added to every day by the staff thus building on the deep flavour, and as ‘The Ramen Girl‘ (2008) taught me, ramen has to be made with heart. It wasn’t heavy though and the chashu slices and bamboo shoots helped to balance things out a bit.

With 35+ years of experience it seems like Ide Shoten is doing something right, especially with that soup which was indeed absolutely amazing. That wasn’t the end of our night though as we were still hungry and continued on to an izakaya (Japanese-style bar) for a lot more food and chat in a more relaxed environment.

Click here to read ‘Dining Out: Slurping Away At One Of The World’s Cheapest Michelin Starred Restaurants!’

Click here to read ‘Dining Out: Pizza Ramen – Don`t Turn Your Nose Up At The Idea Until You`ve Tried It!’

Click here to read ‘Dining Out: The Happy Rainbow Cheese Ramen Which Puts A Smile On Your Face!’

A Leicester City fan teaching English in Japan
View all posts by tokyofox →
This entry was posted in Food & Drink, Japan Travel and tagged 4-84 Tanakamachi, chuka soba, dining out, Ide Shoten, the best ramen in Japan, The Ramen Girl, things to do in Wakayama, Tokusei Chuka Soba, Wakayama. Bookmark the permalink.

3 Responses to Dining Out: The Ramen Considered To Be The Best In Japan