The late Brittany Murphy plays the overly common ‘fish out of water’ role in this one which follows the ‘The Karate Kid’ style format in terms of student respecting and doing all that the teacher requests beginning with taking pride in doing the less-glamorous jobs first in order to appreciate things further up the ladder. Her character Abby is stranded in Tokyo after her boyfriend heartlessly dumps her. She’s miserable, speaks almost no Japanese but despite this she still has a job working at a law firm which in reality probably wouldn’t happen. Late one night she enters her local ramen (chinese noodles in a meat broth with some vegetable toppings) restaurant where she encounters the tyrannical Japanese ramen master Maezumi and thats where the story begins.

Veteran actor Toshiyuki Nishida is well known in Japan and he plays the chef who isn’t charming enough to be liked but likewise he isn’t mean enough to be hated. He speaks no English, she speaks no Japanese and in my view their relative cluelessness as to what the other person is talking about is what makes this film different as this happens in foreign countries but is rarely seen in films. Neither do they suddenly transform into native speakers as often happens! Of course this ‘lost in translation’ scenrio means the film has quite a bit of Japanese dialogue and therefore English subtitles which rarely appeal to English-speaking audiences.

Abby loves the ramen so much she decides that she wants Maezumi to train her in the hope that it will give her life some meaning or something like that. Of course he’s not interested but she’s insistent and eventually he relents and gives her all the cleaning to do and as the weeks pass she wonders if she will ever actually be taught how to make ramen. Eventually she does and the film pretty much turns out as one would expect…or does it?! She creates her own unique ramen dish and hopes to get the approval of the grandmaster ramen chef.

As for the locations there’s no famous Tokyo landmarks and all that features of the capital city are a few street scenes. The ramen restaurant was a studio set but the Ramen Museum Abby goes to on a date with Toshi is real and is in Yokohama.

The end to the movie feels a bit rushed and not really in line with the rest of the film. ‘The Ramen Girl’ is a good way to introduce Japanese culture, values and traditions to other cultures. It really shows how obsessive the Japanese are about food and that it has to be made with ‘tamashii’ (soul) which has had the most lasting impact on me not that I can ever really understand such a thing. 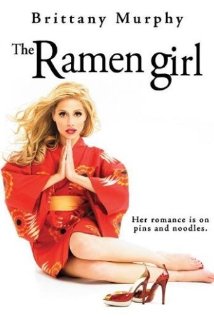