Back when I was nine I did a school project on Paris which whetted my appetite for going to the French capital. 22 years later and I finally went there as a short pit-stop on my way back to the UK from Japan. Surprising to many that I’d never been but when such a city was always in close proximity I never felt in a rush to go there.

After a 12.5 hour flight I arrived in Gay Paree and once I’d located my £13 a night hostel I dumped my bags in and headed out on the Metro. Lined with trees lit-up in silver the Champs Elysees really was a beautiful site with the Arc de Triomphe in the background. I didn’t hang around there for too long though as I knew I’d be returning the following day as I wanted to see that and the Eiffel Tower by night and by day. The latter was next and like the Arc before, it was like I’d seen it before but I guess that’s what can happen when you’ve constantly seen such icons on TV and in print.

Photo stops at Sacre-Coeur and Moulin Rouge rounded off a very very long day and I was in bed by 11pm before being rudely woken up by my Japanese room-mate who didn’t seem to understand the notion of courtesy towards his fellow travellers as he went about his business with such noise that suggested he was in his own home. 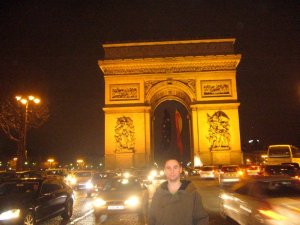 Breakfast was followed by The Louvre which was like a crystal maze at times and difficult to navigate for me. You could spend hours there and barely scratch the surface. I spent two hours in total so you can imagine how quick I was! The smaller-than-expected Mona Lisa and the Egyptian stuff was enough for me. I was more impressed by the outside courtyards.

Notre Dame was next up and then I walked up and down the Eiffel Tower (at under 25 price too!) which really did offer impressive views which is quite refreshing given the number of towers I’ve been up over the years.

Returning to the Arc de Triomphe my Paris adventure finished with a stroll in the drizzle down the Champs Elysees to Place de la Concorde. Many people said Paris couldn’t be done in 24 hours but I was more than happy with what I got done in that time.

A Leicester City fan teaching English in Japan
View all posts by tokyofox →
This entry was posted in Euro Travel and tagged how to do paris in 24 hours?. Bookmark the permalink.