Throughout the summer months Yoyogi Park plays host to many countries’ festivals of which I have been to a fair few in the past. This year I hadn’t been to any due to TESOL course commitments and being on holiday and so on but I did meet up with Peter and his wife Kumiko (below) to go to the Brazilian festival a couple of weeks ago. It was a lovely sunny day and inevitably busy as I guess the idea of a Brazilian festival sounds a bit more exotic than the other ones with its colour, samba dancing and what-have-you-not. 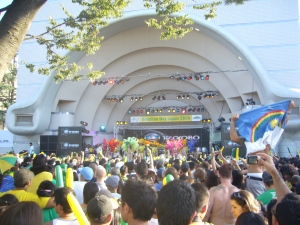 I was probably more excited though about just having a few beers as I had stayed off the alcohol for a while before due to the problem with my wisdom tooth. There was some Brazilian beer on sale which was nice and refreshing and I bumped into my colleague and good friend Mostyn (below) who was drinking caipirinha’s which on first taste were very strong but maybe all the alcohol is in the top of the cocktail. All in all it was a good day, though to be honest these festivals are pretty much all the same to me – lots of people, big queues for the food stalls and music that is not so appealing to my ears. However, that’s not the point as its just nice to hang out and get away from it all amid such an atmosphere. 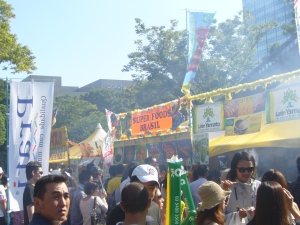