On The Trail Of John Rain (雨) Part VI – Tokyo

The hugely successful re-boots of both the Batman and 007 film series’ back in the middle of the last decade showed that their was a great thirst for such things and so the John Rain series’ of books has followed that tradition as author Barry Eisler fills in a bit of Rain’s backstory and comprehensively explains the events which forged his character, outlook and destiny. The latest novel ‘Graveyard Of Memories‘ dropped on my mat very recently (well it was waiting in my mailbox but that’s not what people say is it?!) with the blurb promising an explosive prequel to the bestselling series.

The story goes back to the Tokyo of 1972 and tells readers how Rain made the transition from the jungles of Southeast Asia to the mean streets of Tokyo. Eisler decided to concentrate the action in the eastern part of the capital which has been transformed far less than in the more cosmopolitan west. This decision was taken to use mostly existing places which have been around since at least 1972 to allow readers to visit them if they wish. Of course that was welcome news for fans like me so here is the bicycle tour I did of the city in the order I did it rather than in the chronological order they appear in the book. Page numbers refer to the time when they are first mentioned in the paperback version of the novel. * Spoilers are included below, you have been warned!

As I was awake I left the Tokyo Fox Global Operations Centre in Shinjuku-ku at 8am on the dot in the hope that I could get back early afternoon to rest and recover ahead of a busy weekend. Temperatures were already in the high 20’s at that time as two stations were clocked up within the first half hour; Akihabara (page 103) and Okachimachi (page 8) respectively. The former is where Rain goes to buy some items needed for his sento mission whilst the latter was nothing more than a place where he caught a train.

Ameyoko (page 4) is short for Ameya-Yokochou a.k.a. Candy Alley a.k.a. America Alley. This area of Ueno is where Rain goes early doors and buys a cup of watermelon juice and then gets jumped by three men. 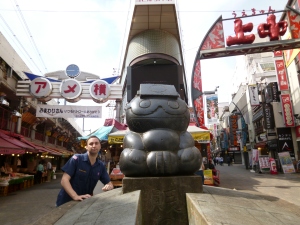 It’s a very short distance to the next locale; Benten Shrine (page 285) which is in Ueno Park and is the place where Rain agrees to meet McGraw. Shinobazu Pond (287) is right next to it and its lotuses is where something pretty major happens at the end of the book which maybe I shouldn’t mention here despite my spoiler warning earlier! 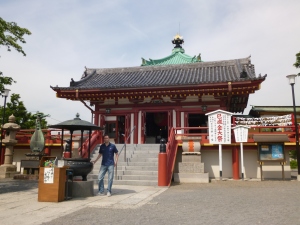 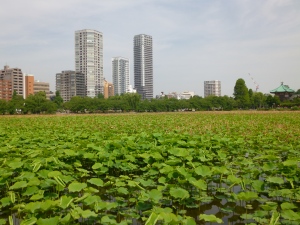 Yushima Tenmangu shrine (page 252, 260) is more commonly known as Yushima tenjin and is renowned for its plum trees and is dedicated to the kami of learning. It’s a popular place for students to come and pray before exams and as if to hammer that point home to me the shrine was full of them by the time I had located it at 3-30-1 Yushima. Rain pays a couple of visits to this shrine; he prays here before his “final test” and later returns to read some information given to him by Tatsu. 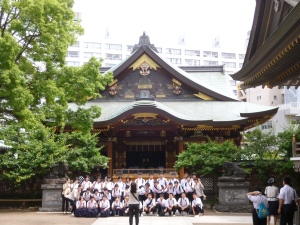 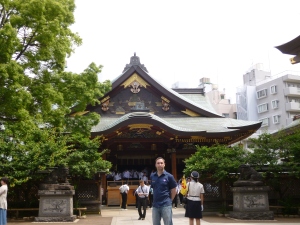 I had been circling the Yushima area for a while beforehand trying to find Shinsuke but ultimately would leave empty handed where that particular place (an old-school izakaya) was concerned. I don’t think its fallen foul of the Eisler-curse which has resulted in many previous Rain locations closing down!

Unfortunately Hotel Apex, the Uguisudani love hotel where the tough Korean wheelchair-confined Sayaka works, doesn’t exist but there are many love hotels in that area catering for couples needing a couple of hours to get it on. It’s all a bit quiet and rather dull during the daytime but comes alive at night when the back alleys full of cheap love hotels do their main business!

The north entrance of JR Uguisudani station (page 128) is where Rain and Sayaka meet up on their date before he whisks her away (via van) to see some live jazz at a club in Kabukicho, the neon heart of Shinjuku.

Next up was the enormous Yanaka Cemetery (page 228) where Rain’s emerging tactical acumen comes to fruition as he takes down three yakuza and just down the road from the cemetery is Kabaya Coffee (page 194) at 6-1-29 Yanaka. This is a two-storey wooden structure standing on the corner where Rain collects a file taped to the underside of a counter seat. The place was busy so I didn’t take a break. The fact that I don’t actually drink coffee was another reason for continuing on with my mission!

Back in 1972, Nishi Nippori (page 26) 4-chome was where Rain lived with a view (of sorts) of the Yamanote train track below which was in the process of being expended to deal with the growing population. 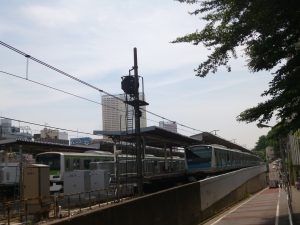 Distances between locations had been very short up until now and whilst another 4 miles north-east to Kita Senju (page 79) might not seem too much it certainly felt like it as I lost my bearings en-route to the Sumida-gawa river which I had to cross. Once I was back on track I found the place and went off the main thoroughfare to discover a tangled tapestry of non-fancy unpretentious houses lining some very narrow, clustered streets. Not sure why I didn’t take any photos in this area but can hazard that tiredness played a part but maybe the main reason my camera stayed in my bag was that there wasn’t an actual address for LDP Executive Council chairman Kakuei Ozawa’s house.

I was then very fortunate to find the next location but thanks to a very kind local lady I found myself following her on bicycle as she led me to the correct address. It’s fair to say that such oba-san have felt the wrath of my rage on twitter before so maybe next time I’ll think back to this example of kindness before I sound off! I had obviously got my numbers mixed up when writing down the address or it is indeed wrong on many sites. The actual address is 32-6 Kotobuki-cho and the place is Daikoku-yu sento (page 81 & 117) where the bathtub fatality of a certain LDP person occurs. It’s open from 3pm to midnight (450 yen) which meant that I was sadly way too early to take a much needed soak! 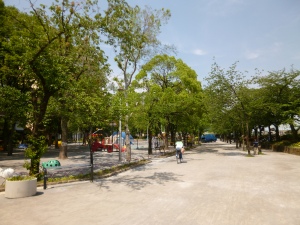 Following a meeting with McGraw, Rain ends up eventually at Sumida Park (page 195) alongside the river (and now opposite the 634 metre high Tokyo Sky Tree) where he sat down to read a file of some sort. It should be noted that parks in Tokyo are rarely ever the green grassy types many westerners expect but are just asphalt or sand surfaces amid some trees.

The final port of call on this day is Kamiya Bar (page 12) which is located on the corner of the two main roads which take thousands of people each day between the station and the highly popular Senso-ji Temple. Rain meets McGraw here at the start of the story. It’s address is quite easy to remember as its 1-1-1 Asakusa! 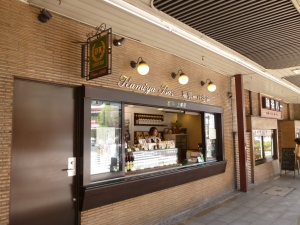 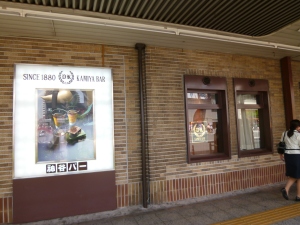 That may have been the last stop but it should be noted that whilst completing all the stops is one thing getting back home is another and my arse is very sore as I cycle on 6.5 miles more to get home just after 2.30pm where I am annoyed to discover that the Runkeeper app (which should track the whole days course) has inadvertently paused at some point. That point happened to be the furthest place which was Kita Senju so given that up until then I had done 35 km I can probably assume I did about 70km in total which aint a bad days work!