The Charlotte Crosby Experience – The Furisode-San Of Tokyo

Now, I’ve got no real idea who Charlotte is. Sure, I know she’s from an MTV programme called ‘Geordie Shore‘ and that she was on ‘Celebrity Big Brother‘ but I have never seen her on those programmes and only really knew about her and this programme because she appeared on ‘Innuendo Bingo‘ on Scott Mills’ BBC Radio One afternoon show a few months ago.

Following her appearance on that show I tried to find this episode online but all to no avail. Probably because it was on some channel called TLC that no-one’s ever heard of! Anyway, I eventually found out that it was on iTunes so decided to begrudgingly fork out £2.50 for the episode.

As one with no knowledge about Charlotte, I went into this programme without any prejudice or preconceptions. The introduction part to the show (which I assume is shown every episode) has her parents telling the viewers that she’s loud, outrageous and a bit stupid. The latter statement becomes apparent straightaway with her terrible geographical knowledge. “Will I see the Great Wall of China?” is one such bout of her wisdom and thinking that Korea is the capital of Japan is another. She also thinks she’s in Thailand at one stage although she does self correct on that one soon after.

Foreigners are often amazed by the Japanese shower toilets and Charlotte is no exception as we hear her shrieking through the (closed) door of the hotel toilet in disbelief at this advance in technology. It was very similar to when Kelly Osbourne was in town for her ‘Turning Japanese‘ show on ITV2 back in 2007.

‘The Charlotte Crosby Experience‘ series feature’s the reality TV personality (not my words!) spending time in different extreme cultures and living with some of the world’s unique communities. Her first proper experience in Tokyo is a cosplay party which she anticipates as being some kind of show with alcohol and dancing! She refuses to wear the sailor moon schoolgirls outfit as she has seen it in a porno movie! She is again shocked on arrival at the party as all the girls (for its mainly a female hobby) are dressed as boys and taking pictures of themselves as Japanese tend to do. Anyway, this goes down with her better than the more-serious parts of Japanese culture which follow.

Furisode has its name in the episode title and Charlotte meets two young girls who wear this style of kimono whilst they entertain customers, perform dance and have conversation at Japanese parties with salarymen. The programme wasn’t so clear about this part but these girls are similar in some ways to apprentice geisha but of course there are some big differences between the two.

Charlotte seems overly keen to be friends with the furisode-san but it’s all on her terms as she seemingly wants to teach them north-east England culture rather than understand and appreciate theirs. By the end of the programme she realises what a dedicated profession it is and how hard their work is. At the start though she has very little respect or patience for anything she’s taught whether it be learning a few simple Japanese phrases or learn how to walk properly in order to be elegant when all she really wants to do is have her face painted and do a strange walk on her knees whilst her legs are crossed!

One of the girls is amazed by Charlotte and talks of her rough hair, long nails (which could potentially damage the valuable materials), no concentration, poor listening and endless cursing. I guess having seen the passion and enthusiasm on previous UK TV shows in Japan this year from Hairy Bikers and Tom Daley it’s quite a step back to hear this loud-mouthed English girl look so unhappy and bored at times. Of course this is all in the edit I guess but it’s definitely a case of there being too many rules for her which I can sympathise with a bit more as this can be a frustration at times.

Later on she’s at Senso-ji temple with the girls getting her fortune paper and complains at first that it’s all in Japanese (the English is actually on the back) and then that its bad news! I thought she was wrong and disrespectful to then screw up the paper and start nosing through all the other drawers to find a better fortune but the girls didn’t seem to mind and began to show a hint of what they’re really like beyond the formalities of their job. This is further exemplified when they are introduced to the “I have never…” drinking game on the back of one of the traditional geisha/maiko/geiko/furisode games which goes down well although it did make me feel a little uncomfortable! I’m sure I’ve done worse in my time though!!

In amongst all that she goes to a zen temple to learn some much needed concentration and calmness. I guess it’s no surprise that she’s never heard of zen though she suspects it will be boring and given that most UK TV viewers just wanna see the whacky and weird side when it comes to Japan she’s probably right in some ways.

Judging by the McDonalds drink and discarded brown bag in the background whilst she (loudly) skypes her family (where she finishes with the line “peace out bitches!”) she didn’t exactly lap up the Japanese culture in the ryokan which is a “no-compromise” Japanese-style inn where Charlotte spends the night. Though she finds the futon comfortable she’s missing the good old-fashioned English cereal at breakfast time. She was even warned by the owner on her arrival to do as Tokyo people do when in the capital city. Oh yeah and one of the rules is no porn though I don’t know why he feels the need to tell a female about this….or is there a part of her background or reputation I don’t know about?! 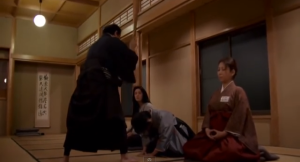 We’re back on track with the zany stuff at a cuddle cafe where the tables are turned on her as she finds out its her who has to do the cuddling. Her reaction to one of the customers is the kind of thing the producers of the show love to see happen. She’s pretty grossed out by the idea of cuddling a stranger but trying to relay this message to the guy just shows how communication is difficult in Japan for many foreigners.

Throughout the programme the footage is all interspersed with Charlotte talking to the camera and offering her valuable insight into the experiences as they happen. She’s taken aback by the language barrier quite often and is often unable to communicate in a way which the Japanese, with limited English ability and knowledge, understand. Can you really expect them to know who the likes of Cheryl Cole, Alan Shearer and Ant & Dec are!!

The stupid hashtags (#CharlotteTLC etc), captions and her tweets (whilst in Japan) appear on screen throughout which I guess are a sign of the times and how TV is becoming so dumbed down. It won’t be long before the UK catches up with the Japanese variety shows where the screen is so cluttered with this kind of cr*p!!

The conclusion of the 44 minute programme is far more optimistic than most of what preceded it as she talks of having had the most amazing time and waxes lyrical about there being nowhere like Japan with its unique cafes (a cat cafe also features) and that being there has inspired her to search English traditions. As this was the second show in a series of which I only saw this particular episode I can’t judge Charlotte too strongly as her attitude may have changed throughout but for now it seems to me that Karl Pilkington is more like Einstein when compared to this idiot abroad.