Going solo on my last day I headed out to do a bit of hiking around a couple of sights which featured in an alternative Hiroshima sights pamphlet passed on by my sister following her recent trip with her family.

The first place I visited is located behind Hiroshima station itself and by taking the Shinkansen exit you can see the white Peace Pagoda (below) sticking out of an area of green vegetation up in the mountain of Futabayama.

Just ten minutes walk from the station is Hiroshima Toshogu Shrine (2-1-18 Fuabanosato) which was built in 1648 and it’s front and main shrines (above) were burned to ashes in the atomic bombing of August 1945.

Kinko Inari Shrine (below) is only about 50 metres from there and actually has the same address as the aforementioned shrine! Over 100 torii gates and 500 stone steps lead up to the inner shrine and it has to be said that such sights like these never fail to amaze me and seeing the beautiful gates makes ascending the many steps a bit more tolerable!

400 metres further up the mountain and you find yourself hiking through a forest before reaching the summit of Mount Futaba where you can see the Peace Pagoda. To be honest, I was fairly unimpressed by first view of it from behind as it came into my sight. The main thing was the (minor) achievement of having made it to the top and thankfully when I saw it from the other side, read about it and saw the views of the city which it offers, I was far more impressed. 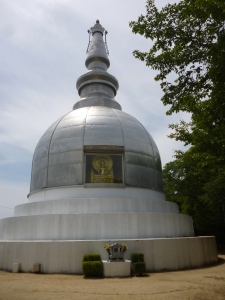 It was constructed in 1966 as a stupa for praying for everlasting world peace and for the souls of the atomic bomb victims.

Having eventually made my way down the mountain and back to Hiroshima Station I then took a Kabe Line train to Mitaki as I had read about a temple in the mountains there with an interesting background to it. This place was certainly off the beaten track and away from the omnipresent golden week crowds. It took a while to locate it as it’s about 20 minutes up a steep road from the station on foot. 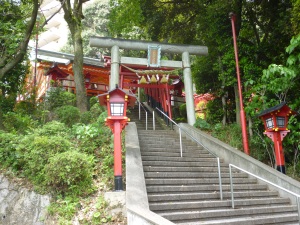 This was quite a charming place with hardly anyone around so I could explore its  beautiful surroundings in relative peace and quiet. There are dozens of buddhist images and jizō statues dotted along the distinctly Japanese “wabi-sabi” paths  which take you through this complex situated in a heavily forested valley on the side of Mount Mitaki.

The name of the place is derived from the three (mi) waterfalls (taki) flowing within the grounds and the water is itself dedicated to the victims of the A-bomb  on that fateful day in August, 1945.

It’s two storied pagoda has been designated as an important cultural property of sorts and was a donation from Wakayama-ken in 1951 to soothe the souls of the A-bomb victims. 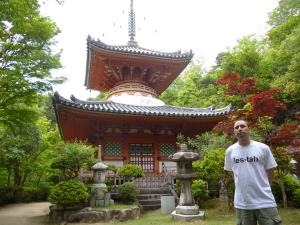 All that may not sound too different from any other temple or shrine but this particular one in Mitaki is seemingly quite unique for it houses a stone memorial dedicated to the victims of Auschwitz during World War II. The inscription refers to the symbolic connection between the atrocities of Auschwitz and Hiroshima which it hopes will never be repeated. 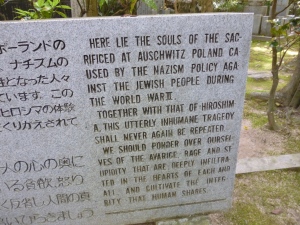 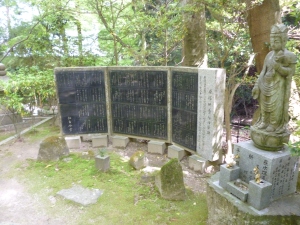 This can be found just up the path past the Peace Bell, which along with the Soshin Kannon Hall, Bell Tower, Inari Shrine, Sanki Gongen Hall and Chinju Shrine,  withstood the atomic bombing on 6th August 1945 that was 3,180 metres from the hypo centre.

You can read about my trip to Auschwitz in Poland here