There’s been a few posts recently on Tokyo Fox about sakura (cherry blossom), and though this one is also about flowers, it’s actually about the city in Chiba called Sakura. The reason Scottish Neil and I left Tokyo so early on Sunday a couple of weeks ago was to make the most of our day trip and take in a couple of sights before watching Kashiwa win away at Kashima.

We arrived at Keisei Sakura station in Chiba just before 10 am which by chance was perfect timing for getting a bus at 10:04 (100 yen) when we thought we might have had to take a taxi. Usually I’d be fine with walking 40 for minutes to get to the tulip fields but we certainly had no time for that. As it was, all worked better than we could have imagined and within ten minutes we were in attendance of the last day of the 28th Sakura Tulip Festa which ran from April 2nd to the 24th. It had been raining hard through the night but was thankfully dry by the time we arrived.

We’d actually seen the windmill from the train window as we passed by en-route to the station but it was far more impressive to see it up close not to mention a little bizarre!  There are 100 different types of tulips of varying colours and fragrance against the backdrop of the Dutch windmill and countryside stretching far and beyond. 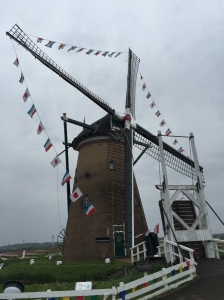 Inside the windmill was a Dutch street organ (above) and lots of big “Miffy”dolls (below); the female rabbit created by Dutch artist Dick Bruna. Netherlands clothes were available for rent and a few young girls were dressed up in the traditional Dutch apparel. We were able to go upstairs where many Dutch bicycles were on show and one could look out across the tulip fields as well as Lake Inba and the train track in the distance.

De Liefde is the name of the 15.6 metre high windmill and it was built in 1994 to mark the 40th anniversary of the foundation of Sakura City. It serves as a symbol of goodwill between The Netherlands and Japan and was actually made in the former and then assembled in Japan where it is the only one of it’s type. It is called a ground-sailer as it’s sails reach almost down to the ground. 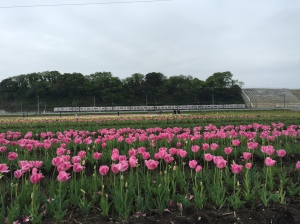 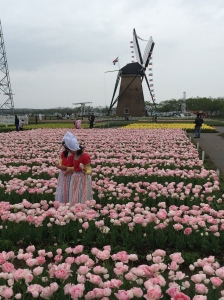 We were fairly satisfied with what we saw and were glad to have made the effort to see this sight at such a picturesque time of the year. We could have stayed a bit longer but felt we should get moving to our next stop so we returned on the 11am bus to get the 11:21 train to Keisei Narita station.

How to get there: Take the Keisei Line limited express from Nippori station. It takes 54 minutes and costs 660 yen