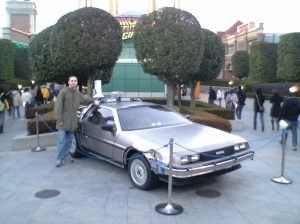 The ‘Back To The Future‘ ride at Universal Studios Japan (USJ) will close on 31st May 2016 meaning that the ride will become completely extinct as the ones in Florida and Hollywood closed in 2007 much to my annoyance as I really wanted to ride it again. On my last visit in 2011 I was unaware that the ride had been replaced by ‘The Simpsons‘ ride but I guess I should just be grateful that I did get to experience it on my first trip in May 2002.

For my Christmas holidays in 2005 I went on a brief tour of Japan that started in Fukuoka, continued on to Hiroshima and finished in Osaka albeit with plenty of side-trips to the likes of Kyoto and Nara too. I stayed at Keisuke’s for five nights and on our first day – Wed 28th December – we went to the theme park which the Japanese call USJ. 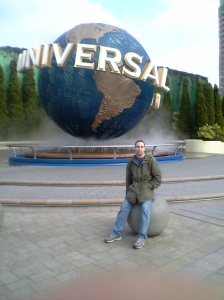 At that time, the entrance ticket was 5500 yen (these days it’s 7400 yen!) and the first ride we went on was the ‘Jaws‘ boat tour one and we got pretty wet straight away particularly on our bottoms! Maybe a water ride for starters on a cold Winter day was not the best idea! 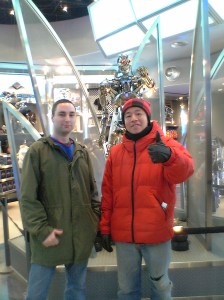 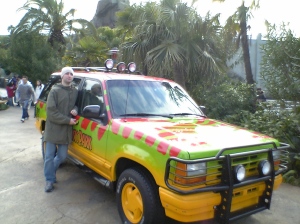 Other rides which I remember us riding on related to ‘Jurassic Park‘, ‘Spiderman‘ and ‘Terminator II‘ but the ‘Back To The Future‘ ride was the one I wanted to experience again. It opened at USJ on 31st March, 2001 but naturally the roles of Dr. Emmett L. Brown and Biff Tannen (roles reprised by Christopher Lloyd and Thomas F. Wilson respectively) were dubbed over in Japanese. Annoying for me as an English speaker but this is Japan where the language is Japanese so what can you do?

The ride itself was centred around Doc Brown plotting against arch enemy Biff in order to get history back on track. The high flying time travelling machine that we sat in ripped  across the past and future (chasing Biff in the process) in a very realistic and enthralling simulated ride where we hit the magical 88 mph on multiple occasions and each time we  were transported on a journey to survive exploding volcanoes, devastating avalanches, ice-filled rivers and the perils of future civilisation in Hill Valley. We were shunted and jolted about frequently as we swerved and dodged the various flying cars and dinosaurs while speeding through time on what was a very enjoyable ride. Little did I know that that would be my last ever ride on this ride!

The theme park is divided into sections and there must have been one’s designed to look like stateside places such as New York City and Hollywood with a range of American-style restaurants (including the Mel’s Drive-In restaurant from ‘American Graffiti‘) complete with retro cars outside them. 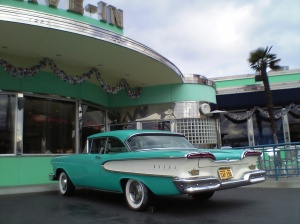 We only had Mos Burger for lunch and back in Osaka city afterwards we went to Tennoji for lots of beer and way too much kushiage (deep-fried skewered meat and vegetables). 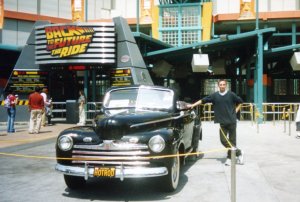 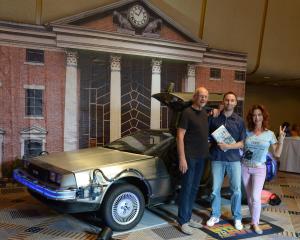 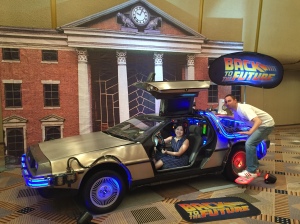 Click here to read ‘Back To The Future Cafe In Ikebukuro’ 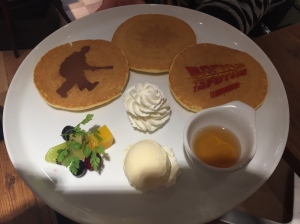 Click here to read ‘Back To The Future Secret Cinema’

Click here to read ‘Back To The Future Filming Locations’

Click here to read ‘Back To The Future 25th Anniversary’

A Leicester City fan teaching English in Japan
View all posts by tokyofox →
This entry was posted in Action & Adventure, Japan Travel and tagged Back To The Future, Back To The Future The Ride, BTTF ride to close, Delorean car, the simpsons ride universal studios, Universal Studios Hollywood, USJ Osaka, What is kushiage?. Bookmark the permalink.