When it comes to sights in Osaka, many people really struggle to come up with anything much beyond Osaka-jo Castle, Universal Studios Japan (USJ) and Dōtonbori shopping street but there are of course many, many things to see and do. As has become customary in recent times, Tokyo Fox has compiled a few lesser known “sights” which are worthy of more attention.

Thanks to Facebook targeting me with adverts for Red Duck Post videos, I became aware of Happy Labo (11am – 7pm) which specialises in frozen popcorn (that results in smoke coming out of your mouth!) and black ice cream. It is located at 1-25-12 Minamihorie in Nishi-ku just to the west of Dotomburi. The closest station is Sakuragawa station on the Subway Sennichimae Line which is a seven minute walk away. I chose to have the black ice cream (500 yen), presumably made from black sesame, which was much nicer than expected.

The four giant head (and feet) figures (below) as part of the Namba Dōtonbori Hotel (2-3-25 Dōtonbori, Chuo-Ku) exterior were something I wanted to see. Each of the statues represents a difference race (Asian, African, Arabian and Western in order going from left to right) and they were created with a desire to welcome guests from all over the world. Sadly I didn’t think to check behind the pillars as I’ve since found out that you can see their buttocks!

The next two places are all about their interesting architecture. First up is Aprica Childrens Products Department Store (1-13-13 Shamanouchi, Chuo-ku) near Nagahoribashi station on the overly long-named Subway Nagahori Tsurumi-ryokuchi Line. I can’t imagine many tourists are able to spit that name out! 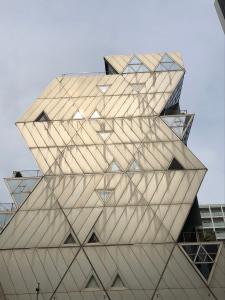 This watermelon-shaped building (below) is actually a school, namely Osaka Prefectural Kitano High School (2-5-13 Shinkitano, Yodogawa-ku) which is about 10 minutes walk from Juso station on the Hankyu Railway line. 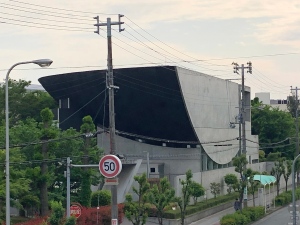 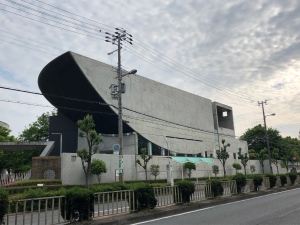 My hotel was located close to Shin-Imamiya station (although Dobutsuen-mae was actually the nearest station) and proved to be a good location for me. When I booked a room at Hotel Toyo through Expedia it said that the staff may not speak English which I certainly wouldn’t expect anyway. However, the large increase in tourism to Japan these last few years has changed things a bit so when I checked in I didn’t encounter a place full of Japanese businessmen like I thought. Instead, there were signs everywhere in English including the toilet and hot-water pot which took me by surprise as I’ve just got used to using them without even really recognising the kanji characters used on them. The staff were very friendly and also spoke English too. My room (below) was very basic with just a futon and a small TV and in some ways not too dissimilar to a capsule hotel albeit less enclosed. It did the job though and at only 1500 yen per night was a bargain.

It was well located for Tennoji which is a bit of a tourist area and a far cry from the place I remember visiting way back in 2004. I even recognised the place where my friend Keisuke and I had so much kushikatsu back then. It was just a stones throw from Tsutenkaku Tower (1-18-6 Ebisuhigashi, Naniwa-Ku) amidst a very in-your-face kind of place with all the neon lights and tacky-looking shop facades. 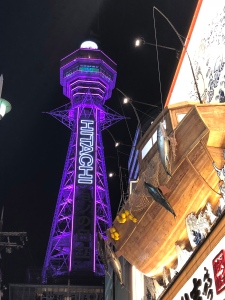 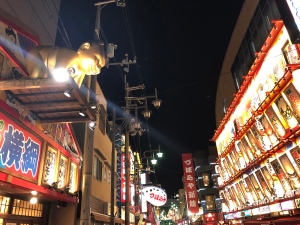 In the other direction to my hotel was a far more dodgy area not that I knew it at the time (honest!). I did pass through this area, known as Tobita Shinchi, on my final evening in Osaka and realised why a couple of my students said it was a dangerous area. It’s an old style red light district with lots of open rooms where the prostitutes sit on cushions next to the owner (their mothers??!!) who try to lure customers in to presumably get down and dirty in exchange for a handful of yen! Also in that area was this interesting building (below) called Taiyoshihyakuban (3-5-25 Sanno, Nishinari-Ku) which dates back to the Taisho Period (1912–1926). Nowadays it is a 120 seat izakaya serving up traditional Japanese food. Not far from there was something that caught my eye as it is surely one of Japan’s cheapest drinks vending machine (there is a 10 yen one in Osaka) with just 30 yen getting you the lowest priced beverage.

It wasn’t all B-grade sights for me though as I did venture into the overly-crowded Dotonburi area on my first night. This place is a step up from Tennoji and is full of giant sized food items like sushi, gyoza, crab, octopus and so on. Osaka is known for its takoyaki, okonomiyaki and kushikatsu but I really didn’t feel the need to eat it just because I was in the city famed for those dishes. Besides, I’ve experienced all of that on previous visits to Osaka. 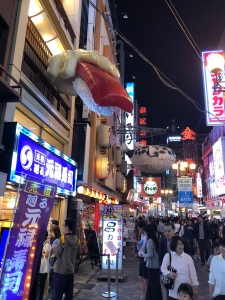 I would have loved to sample lots of the street food but I was on a budget so I just bought some gyoza (240 yen for 6 pieces) at Osaka King Gyouza and was then keen to escape the crowds and get to my accommodation as it had been a very long day. I wandered round a little bit more though and saw the ever-popular Glico Sign among other things. 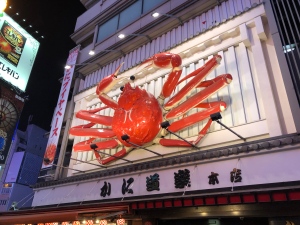 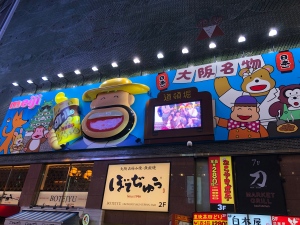