Dining Out: The Ice Cream That Towers Above All Others

Few things taste more refreshing than ice-cream during Tokyo’s overly hot and humid summer days. Sadly it was out of bounds for me on my recent 30 day challenge (which lasted for 69 days!) but once that was over I made my return in style. The likes of ‘Ben & Jerry’s‘ and ‘Baskin Robbins‘ (known as ‘31‘ in Japan) usually only serve up two or three servings of ice-cream but this place in a shopping complex more famed for it’s geeky pop culture collectable shops has a food stall which sells the tallest ice-cream in Japan.

This place in Nakano first came to my attention a few years ago and every few months I thought that I’d like to try it one day. I always thought it’d be best to eat it in summer but it bypassed my mind a few times. Not this year though and so I finally went to try the mega 8-scoop ice cream tower last Friday. I decided to skip breakfast and cycled the 7.5 kilometres distance to Nakano Broadway in the soaring summer lunchtime heat where temperatures are regularly in the mid 30s if not higher!

As expected, the basement of the shopping centre was fairly deserted when I arrived. I located Daily Chico (デイリーチコ) (5−52−15-B1 Nakano, Nakano-ku) and instantly saw a replica of Japan’s tallest ice-cream on display on the counter. 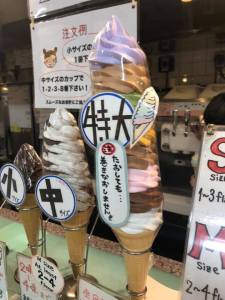 What I didn’t expect to see was that the store was kind of divided into two with the ice-cream (known as soft cream in Japanese) on the right and fast-food noodle dishes on the left.

There was no hesitation from me about what I wanted though. I wasn’t sure how much the ice-cream tower was so had to ask not that it would’ve affected my decision too much! 700 yen was the reply (whether it be in a cone or a cup) which is much more than I’d usually spend on ice cream but for eight different flavours and it’s uniqueness I thought it was a very reasonable price.

The staff member expertly served up all the different flavours on top of each other. The cash transaction was thankfully done before all this as you can just imagine someone comically scrambling around to find the right change whilst the ice-cream starts to melt!

The eight flavours didn’t really register with me at the time which was maybe a good thing as I’m not too keen on a couple of them! All I saw was a colourful concoction like nothing else I’ve ever had. Subsequent analysis of my photos tells me that the flavours (working my way down from the top) were strawberry, coffee, milk, chocolate, grape, banana, ramune (a bastardised Japanese pronunciation of lemonade) and matcha.

Of course one wants to take a few pictures of the beast as lets be honest the main point of having this ice cream is to show off about it on social media! However, time taking photos means less time for eating the damn thing before it falls off or melts.

There is a disclaimer sign from the company saying they accept no responsibility for those silly customers who have dropped it or whatever whilst taking their pictures. I didn’t want to become one of them! 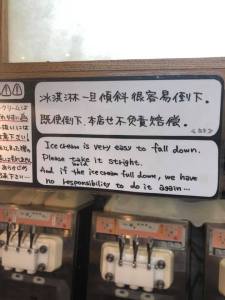 If I’d taken the mega-sized ice cream outside it would have melted in moments. Luckily the basement of Nakano Broadway was quite cool and also devoid of too many people so I could find a quiet corner to gobble it up. It took me about 12 or 13 minutes to eat and it was something of a pressure situation due to the aforementioned dangers. Brain freeze was another problem and one that inevitably came my way around the half way mark. There wasn’t time to suffer too much though and I had to just plough on regardless.

There was actually a chair just round the corner from the stand which I didn’t notice until I was down to the final dollop of ice-cream. I wouldn’t have sat down anyway as I felt that such an eating challenge needed me to be stood upright. 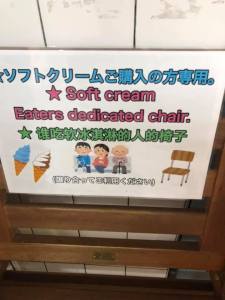 I’ve no idea how many calories this bad boy was but I like to think that cycling there and back in the intense summer heat may have gone some way to burning off a certain percentage of those calories!

1 Response to Dining Out: The Ice Cream That Towers Above All Others