Have you ever met anyone who went to an amusement park by themselves? Probably not as that is pretty sad, isn’t it! As you can probably guess though, that is exactly what I did on my first afternoon in Okayama!

Keen to experience the Sky Cycle ride which brought this theme park to my attention a few months ago I had no real choice but to go alone with my wife out of the way. With no idea when I may next be in Okayama I thought I had better take this opportunity even if I did have to fly solo! 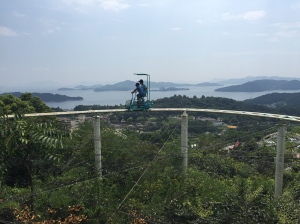 Washuzan Highland is actually some kind of Brazilian themed amusement park where the staff all wear Brazil-style football shirts. There was also a samba band performing in the stage area in front of the cafes and restaurants. A few families watched on half-heartedly whilst taking a break from the pool and rides. 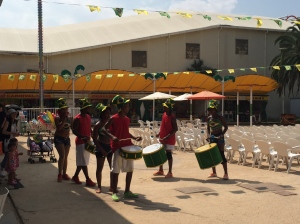 Entrance was 2800 yen and pretty much everything was included from there on. The place was not exactly packed with people and some of the rides, such as the vertical drop,  weren’t even operating . On arrival I immediately ascended many, many steep steps amidst the scorching temperatures and headed for the Sky Cycle ride which really drew me to this place having seen a short video about it a couple of months ago. 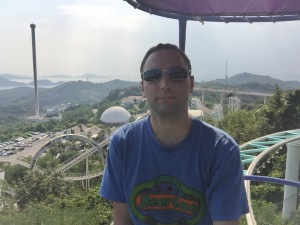 Normally this would be a fairly dull and tame pedal-powered ride but this one is erm, heightened by the fact that you’re so high up above ground and can see right across the Seto Inland Sea to some of the islands and the Seto Ohashi Bridge. The views are beautiful and breathtaking but just don’t look down!

A basket is provided on the front of the cycle and the seats have seat-belts but there’s no guard rail. Once you start off you’re basically on your own and can go at whatever pace you like depending whether there are any other riders in front of or behind you.

One thing that did require a bit of extra cash was the bungee jump (below). It was 1300 yen to do one but as it was jumping style, and looked identical to the one I did at Yomiuriland nine years ago, I decided to not add to my previous four jumps.

A quick spin on the tea-cups followed (having ignored the Big Wheel – it can be like a sauna sat in those pods!) and then I went on Ultra Twister (above) which was fantastic. It was made all the more awesome by the fact that I had no idea what the roller-coaster entailed until I rode on it. 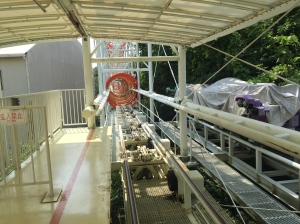 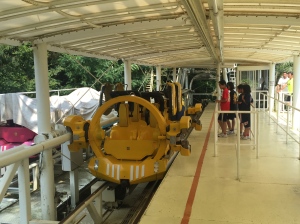 First we went backwards and then vertically up and up before the inevitable stomach-churning descend. After that you usually relax a bit but this one then twisted from side to side as you went through a couple of tunnels both forwards and then backwards. I was mightily impressed and subsequently rode it two more times as the lines were so short.

The Standing Coaster Backnanger was next and was also great fun. I rode it a couple of times while it threw me around a bit (within the constraints of the protection) as there was a big drop followed by a loop. Standing up on a roller coaster (below) really adds something to the experience for me.

Other attractions in the park include an animal circuit, games arcade, inline skating,  haunted house, Merry-Go-Round, kids athletic zone, food court and a few other rides and amenities. I wouldn’t go too out of my way to visit it but if you’re in Okayama and have a half day to spare then it’s recommended. 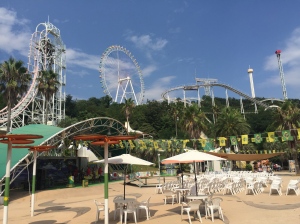 As a final stop I handed in my ticket for entrance to the pool area, took the two pictures below and promptly left seconds later. A shame as a swim and the chance to cool down in the pool would have been lovely but I didn’t have any swimming stuff with me and I was also short on time and needed to get back to the station ready to move on to the next destination. 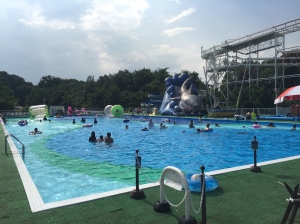 How to get there: Take a Marine Liner train from Okayama to Kojima (24 minutes, 500 yen) and from there you can take a bus to Washazu Highland. Buses stop by the theme park a few times every hour but not wanting to waste too much time I took a taxi there (1300 yen). On my return I took the bus which cost about 250 yen and took around 30 minutes.