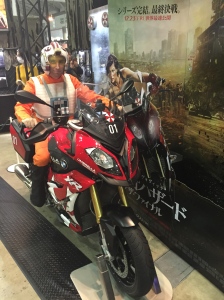 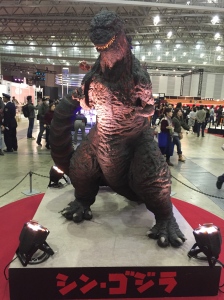 From the moment it was announced last year, I was very much looking forward to this event and my mind was working overtime with the possible guests that I hoped might be in attendance. Sadly none of them were realised, and as the months rolled by this year there were still no real guests that I was desperate to meet whilst parting with some considerable cash in the process too!

Last years event was something of a trial and launchpad for this years inaugural Tokyo ComicCon which was quite a step up in size as it took place over two and a bit days at Makuhari Messe convention centre in Chiba which actually played host to ‘Star Wars Celebration Japan‘ in July 2008. It has also hosted many other annual events like Tokyo Motor Show, Tokyo Game Show and the Summer Sonic music festivals. 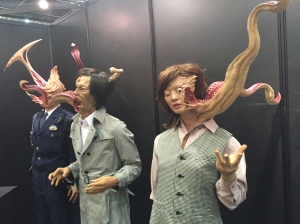 On entering the exhibition centre just after midday (it started at 10am) it really was all quite overwhelming at first. No doubt we missed a few things as we wandered round and round the place for the following five hours or so. This years guests were Stan Lee, Jeremy Renner, Matthew Lewis, Billy Boyd, Lance Henriksen and Daniel Logan. The latter must’ve been added quite late on as there was nothing on the official website about him doing autographs or photos. As it was, he was there for the opening and closing ceremony stuff on stage and was generally just hanging out at the place. Logan played young Boba Fett in ‘Attack Of The Clones‘ (2002) and the ‘Clone Wars‘ (2008-2015) animated series and I hoped to meet him but never did not that I really bust a gut in trying to track him down.

Back in the mid-eighties ‘The Knight Rider‘ (1982-1986) must’ve been one of the first non-kids show I watched and I liked it a lot. When I watched it again a few years ago though I realised that it was actually pretty cr*p but the theme tune and the car (and of course the Hoff too!!) are awesome and so it was cool to see KITT (below) on display at this convention. 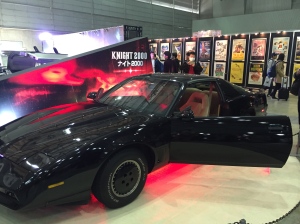 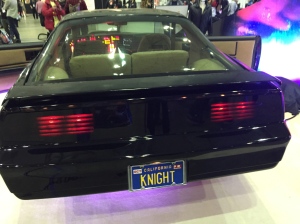 Even though I’ve seen a Delorean (below) a fair few times now (I’ve even sat in one!) I never get tired of seeing one and couldn’t help but get some new pictures and this one had a few extra props from ‘Back To The Future Part II‘ (1989) on the front seat.

The Christian Bale bat-suit was on show too and at the time I thought it was the same one I saw at the London Film Museum in December 2010 but it appears that this one was from ‘The Dark Knight‘ (2008) and ‘The Dark Knight Rises‘ (2012) rather than the ‘Batman Begins‘ (2005) movie which reignited that franchise. Surely the two suits can’t be that different though!

There were plenty of other Batman-related exhibits throughout the place and a selection of them can be seen below. 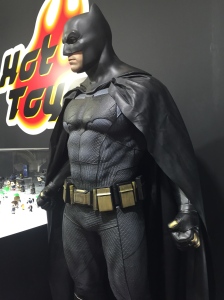 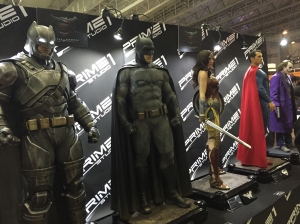 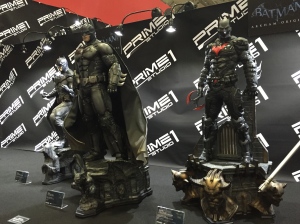 The colour-changing T-800 from ‘Terminator 3: Rise Of The Machines‘ (2003) was on display (below) along with some other exhibits from that franchise. 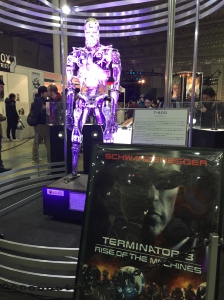 I’m always surprised at these events by the companies who get involved. Sure, you’d expect an American toy shop or whatever to be involved but I would never expect to see booths from TV stations or airline companies. Even food vendors like Domino’s Pizza made an effort to provide something of a photo opportunity (below) with a prop in the form of this special delivery bike!

There were no interview panels like they have at ComicCon in San Diego but there was a stage with some stuff happening on stage not that I have any idea what. Seemed to be a lot of young all-female Japanese singing and dancing groups but whether thats actually true I don’t know! Among the other things on show was a Shin-Godzilla statue, a Resident Evil motorcycle, a Blade Runner shop, plus loads of artists, exclusive figures & toys and photo opportunity chances aplenty.

There was a kind of Star Wars zone in the far corner featuring fan clubs like the 501st Legion and the Rebel Legion amongst others with all manner of helmets, figures, models, books and pamphlets available to be viewed. 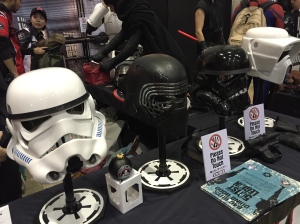 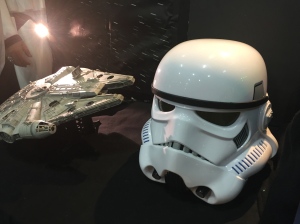 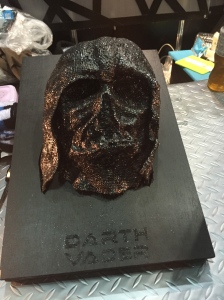 My friend at the Glitter Factory booth had quite a prime spot in that area and it was a hugely profitable weekend with never ending queues of customers awaiting the chance to cover their body in these fun and colourful temporary glitter tattoos. I decided to get the Rebel Alliance logo tattooed on my arm when the lines had died down a bit towards the end of the day.

The event was to be over at 6pm and the baggage area was closing at 5:30 pm so we had no choice really but to call it a day on the cosplaying front. The changing room was certainly a smell to behold with many sweaty men in there getting changed and packing away their costumes into cases as normal life was resumed. Back to reality and the real world but I still had time for a couple more photo opportunities.

Admittedly, I had quite low expectations for this inaugural convention and was a little underwhelmed by the guests but ultimately I was won over and had a great time. The organisers have got to start somewhere and the more successful this event is the chance of attracting bigger and better names in the future should be realised. Bring on 2017!