A Day In Osaka

Osaka-jo Castle and some local food have pretty much been part of my itinerary on my previous three trips to Osaka but this time I was just stopping off there for a few hours whilst going between Hiroshima and Nagoya. This layover-like trip (6-7 hours) was to include none of the classic Osaka suggestions for things to do as I was in town to seek out some lesser known wonders of Japan’s second city. 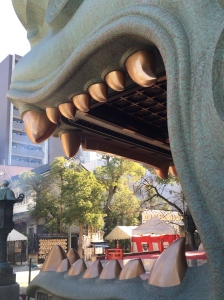 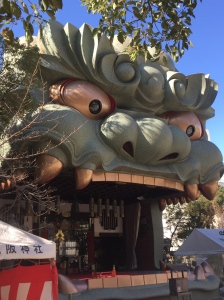 My primary concern was the two Inari shrines featured in the ‘On The Fox Trail……In Osaka‘ post but in between that duo of places was another one of worship. Namba Yasaka-jinja (2-9-19 Motomachi Naniwa-ku) is an interesting looking place indeed. It was built 40-50 years ago and the creatures eyes light up, there’s a speaker in its nose and a stage in its mouth! 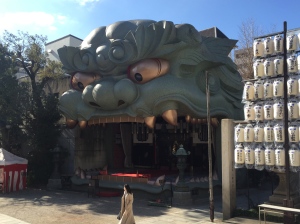 At lunchtime I went on over to Owada station on the Keihan Line to visit Oki’s Sushi Bistro a.k.a. Minayoshi which I first went to with my wife in Golden Week last year. 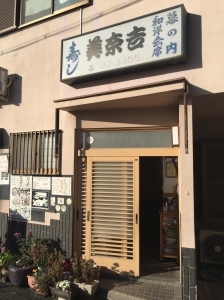 Oki is not only a sushi chef (specialising in sushi cake) but is also a dab hand at carving all manner of things from vegetables (including Star Wars characters and spaceships) such as the chicken pictured above. With ‘Rogue One: A Star Wars Story‘ (2016) still very fresh in our minds from our multiple viewings, it was nice to discuss that as well as other Star Wars-related things in way more depth than when my wife was around! 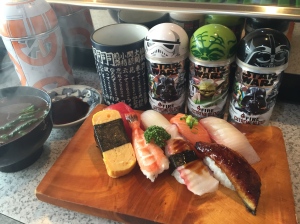 Back in the centre of Osaka there were a couple of short stops just to photograph some interesting architectural structures. Namba Hips (below) is close to Namba station and  was built in 2007 and featured a free fall ride although that is no longer in operation. 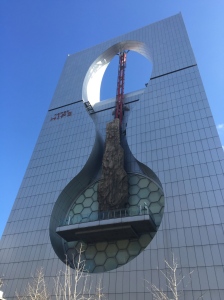 My final port of call was the Umeda Sky Building (below) which is supposedly based on Machu Pichu in Peru though I’m clueless as to the link between the two! This building was a product of the bubble-era and was completed in 1993. I’m not sure what it’s present situation is as it looked fairly abandoned when I saw it or maybe it’s just having some kind of renovation.

After that I felt fairly satisfied with what I had done in Osaka so decided I’d get going to Nagoya by local train a little bit earlier than I’d planned in my mind.

5 Responses to A Day In Osaka