Dining Out: Halloween Treats At A Conveyor Belt Sushi Chain

Friday the 13th is here and I’m sure you all know what happens on this particular date don’t you?! Yep, absolutely f*** all!! Well, that wasn’t quite the case actually as conveyor-belt sushi chain Kurazushi introduced a few Halloween-themed treats to its menu for a limited time and Tokyo Fox was there to sample them. 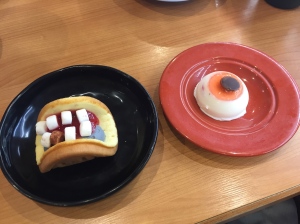 It may be a sushi restaurant but these days such places sell just about everything whether it be ramen, tempura, udon, fried chicken, fries, coffee or cheesecake. Of course you can get all the usual sushi items but they also offer many b*stardised sushi items which I have long been a fan of. The special Halloween menu consists of four grotesque treats including two savoury items and two desserts.

For a long time I have had this date earmarked as my return to eating any kind of treats after just over a month without any chocolate, candy, ice-cream and other such snacks. The closest branch of Kurazushi to the Tokyo Fox Global Operations Centre is in Ikebukuro so my wife and I headed there today avoiding the lunchtime rush.

First up was the Witch’s Shrimp with mayo (216 yen) which was basically some hot shrimp tempura covered in a vivid purple-coloured sauce. Purple cabbage is used to make the special mayonnaise and it was rather tasty which was a good thing as the other main dish featured it too.

Following that I ordered (all done by touchscreen for those not in the know!) a few more regular sushi dishes but no-one wants to read about that! The Disappearing Ghost Black Curry (399 yen) naturally uses squid ink with curry roux which results in the gothic black coloured curry and this dish was next on the menu for me. The purple mayo features again but that’s not all as it’s all topped off with some white sugar candy which presumably represents some kind of ghost! This one was your typical Japanese curry-rice dish but with a bit of a spicy after kick. 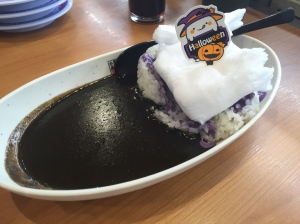 For the record my wife had none of these “silly dishes” as she called them. To finish off the meal I ordered the two themed dessert treats. I guess the Witch’s Gums (270 yen) is the most grotesque of the Halloween items. I was quite surprised that the grey stuff was actually ice-cream made from bamboo charcoal. There are then one brown and seven white marshmallows which are designed to look like teeth. They may look like bleeding gums but it’s just raspberry sauce! Bloody marvellous! 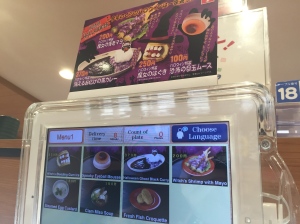 The other dessert was far more simple and resembled an eyeball. Known as Horrifying Eyeball Mousse (108 yen) this is basically a strawberry jelly with a chocolate button helping to make it resemble an eye. The strawberry sauce “blood” oozes out as soon as you dig into it with your spoon. 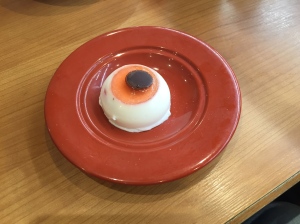 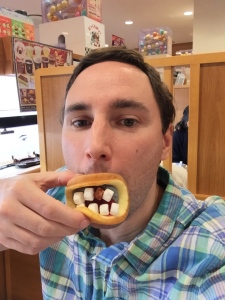 There’s absolutely no doubt that Japan has really embraced Halloween in the last few years and since the start of September all manner of confectionary and decorations have begun to gradually dominate many shops around the country. These ghoulishly themed items are a most welcome addition to the Halloween season.

1 Response to Dining Out: Halloween Treats At A Conveyor Belt Sushi Chain