It was really nice to see Batman in animated form for a colourful, witty and entertaining movie……but that’s enough about last years ‘The Lego Batman Movie‘!! This Japanese-produced film is a distant second to that though and I really do emphasise the word distant! 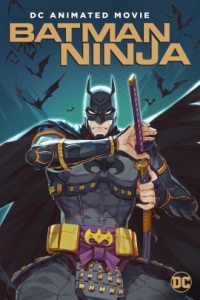 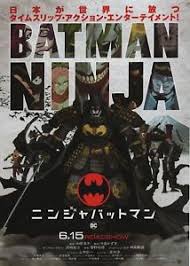 It’s common practice to begin films reviews with a plot synopsis but that is a little difficult to do with ‘Batman Ninja‘ as I really found it hard to work out what was actually going on for the 85 minute duration. By movie standards, it’s a short film but knowing that in advance of watching it was probably what got me through it all.

The premise of the movie is that the caped crusader travels back in time to feudal Japan where he is chased by samurai working for his old adversary The Joker. Catwoman then turns up too and reveals that all of Gotham City’s top criminals just happened to arrive two years prior to Batman as he was in the outermost area affected by the Quake Engine which helped them time travel. ‘Teenage Mutant Ninja Turtles III‘ (1993) was also set in feudal Japan and should’ve provided the only lesson in demonstrating that this period of Japan’s history and time travel really is not a good mix!

Anyway, all these criminals from the world’s most crime-ridden city have become feudal lords after deceiving the previous ruling group. In order to stop the villains from changing history, Batman and Catwoman have to get to the Quake Engine in Arkham Castle whilst some other pointless stuff happens. It’s a fairly messy story and not easy to follow because it keeps changing from one minute to the next.

What also changes throughout is the the style of the animation which alters back and forth displaying a variety of forms and techniques. Some of it looks good and other bits are less than impressive. There are a lot of interesting Japanese things to notice but it can’t be cultural appropriation this time as it was made in Japan with an all Japan cast before being dubbed into English.

Director Junpei Mizusaki really has gone for style over substance with this superhero time-travelling animation where the fate of history is at stake. Kudos to the producers for trying something original but this particular take on such a popular and beloved DC character is not one that appealed to me in any way beyond the Japanese cultural bits, and to be fair, after watching about 60 films set in Japan, such stuff has long lost its value in my eyes. Maybe this is a better film if you have no affinity or affection for the dark knight at all.

The voiceovers are one point that I can’t criticise too much though some may get a bit annoyed or fed up of hearing The Joker constantly cackling throughout. It has been reported that so much was changed when getting it ready for the English-speaking market that it was almost like having two different movies as they were developed separately but simultaneously. I should declare that I watched the English version only so maybe I’d get a different picture (not literally!) if I saw the original Japanese version.