Two “Christmas Days” Back In My Hometown With The Family

After five years away I returned to England to spend Christmas with my family back in my hometown of Market Harborough in Leicestershire. I can’t say I was really planning to return this time as I had seen my parents briefly in Melbourne back in March. However, my wife was amazingly given time off for the whole of Christmas and not just the New Year as is customary in Japan.

That gave us the perfect opportunity to fly home for the festive season and after arriving at Heathrow Airport on the 23rd we were met by a pre-arranged taxi driver who whisked us back to Market Harborough in two hours. It saved on both a hotel for the night as well as a lot of time and hassle in carrying our luggage across London on the Tube.

The Old Grammar School is undoubtedly the symbol of the town and it dates all the way back to the early 17th century. It is closely allied to the Parish Church which stands next to it and unbelievably I actually chose to attend the afternoon service on Christmas Eve which was really busy and full of kids who were involved in some re-telling of the Nativity Play interspersed with a few hymns, carols and prayers which I’ve not heard since I was in Primary School. During one of the carols, kids dressed as shepherds walked down the aisle to the crib to collect candles or glow sticks ready for lighting.

Earlier that morning I had met up with James who I have been mates with since about the age of five. We caught up (and reminisced!) over an hour and a half at Starbucks and he was the first of my old friends to meet my wife. Following all that top banter we then headed up the High Street to see his mum and niece before they (along with the rest of their family) departed for a family lunch.

It was the big day the next day and with jet-lag rampant we were awake very early although thankfully I did nod off again for a bit before breakfast. With no kids around it was a fairly quiet affair for my wife’s first Christmas in the UK. They say Christmas is all about the giving and that was certainly true for me as I only had one present (the pink away Leicester City shirt as seen in the last post on Tokyo Fox!) and that was actually something I’d bought online myself!! 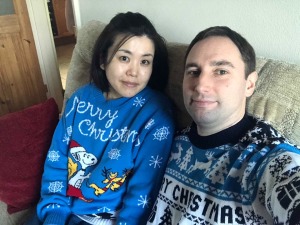 The day really was centred around Christmas dinner but it wasn’t the full works as some stuff was being saved for the “other” Christmas Day! 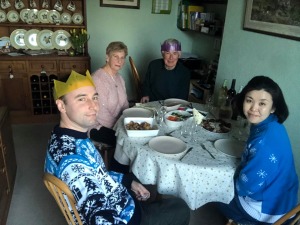 I can’t ever recall going outside on December 25th (apart from going over the road to visit the aforementioned James when we lived on the same street as kids) when in Britain but we did all go out for a walk around Great Bowden village in the afternoon which was actually a very nice day with a beautiful clear blue sky.

The rest of the day was just taken up with TV before calling it an early night. It was the end of the official Christmas Day but there was still one more to come and that would be the bigger and better one! Great things come to those who wait and three days later my sister’s family arrived and I finally got to meet my three your old niece Alice for the first time. I was surprised that we managed to hit it off fairly quickly and she really was a cute, funny and delightful young girl. 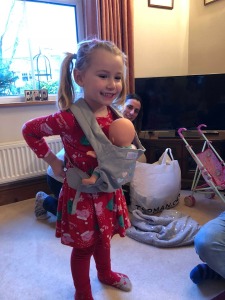 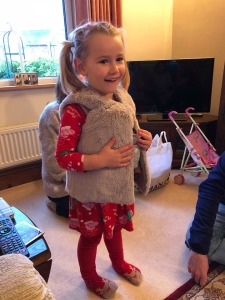 A load of presents were given to nephew George (who we had met a few times albeit 5-6 years ago when he was very young! Luckily he seemed to remember us though that’s more down to one or two video calls each year!) and Alice mid-afternoon and I even got a few courtesy of my sister and her husband. It all seemed to go well this time with no tears or tantrums…and the kids were fine too!! 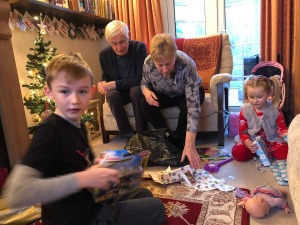 The following day was my dad’s 75th birthday and the excitement of it was too much to take as you can see from the second photo below!

The traditional Christmas dinner including Yorkshire Puddings this time was the main event of this day. 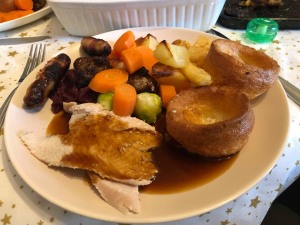 Unlike the 25th when my wife went to bed quite early in the evening, this one was full of games. I had my tablet with me which still had ‘Where’s my pants?’ on it from five years ago. George was not impressed and called it the most boring game in the whole wide world or words to that effect. Alice, on the other hand, really enjoyed playing it and took way longer than expected to get bored of such a simple game.

A cheaper alternative to the ‘Who am I?’ board game was a big hit and would be a great addition for me in the classroom in Tokyo where such yes/no questions are often a part of lessons for Junior High School students as well as lower-level adults. After that a few of us played with the Norwich City Top Trumps I’d given my dad for his birthday as if they weren’t used then then they’d never be used not that it really mattered as it wasn’t exactly a serious or main present for him! Given that the subject of the cards really is not that important we then played with my ‘Star Wars Episode VIII: The Last Jedi‘ (2017) ones too as the fun and games continued up until bedtime! 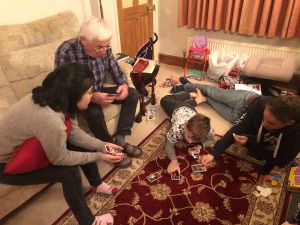 Christmas Day in Japan has admittedly been fairly lame for the last few years. For those it’s usually just a case of getting through the day and keeping myself busy in some way. Christmas back home is what it’s all about though and it was great to spend it with the family. Not knowing when I’ll next be back at that time of the year it was good to experience the day two times!

Click on the links below to read about previous festive trips back home: