Taking My Wife On Her First Trip To Leicester

My wife Rina may have been to my hometown twice before (August 2013 and August 2014) but she had never been into Leicester. Now that would not be a problem for almost all tourists visiting England but she is married to me!! As mentioned in my ‘Sightseeing in Leicester‘ post five years ago I was born in Leicester, used to regularly go shopping in the city, worked there for a while and have a great love for the place.

A surprise was waiting for us at the station just after Christmas as by chance my old schoolmate James (who featured in my very recent Christmas post) was waiting to go in the opposite direction.

The journey to Leicester is only about 15 minutes yet costs about ten more times than a similar-length trip in Japan! 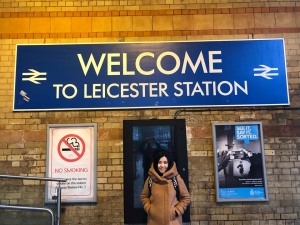 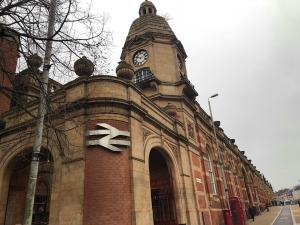 The Thomas Cook statue (below) has been outside the station since 1991. He is one of the city’s best-known adopted sons but sadly 2019 was a very bad year for the 178-year-old Thomas Cook holiday firm as the it collapsed. 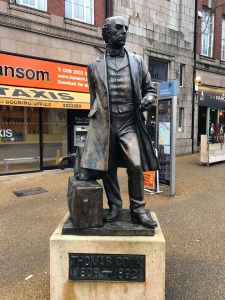 Leicester Market was closed on the day we went there but the Highcross Shopping Centre was open and a fair portion of our day was spent looking around the shops in there. Well she looked whilst I usually waited outside! 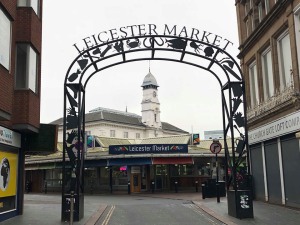 We had an early lunch at Wagamama (below) as we both wanted to see what it was like. Details of that and all the other “Japanese” food we ate in England can be read here. 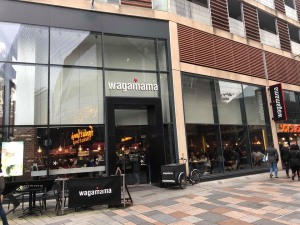 That was followed by Costa Coffee which is her favourite coffee shop chain. Little did I know until researching it just now that it’s actually a British company owned by a subsidiary of The Coca-Cola Company. I can assure you that she was actually happier than the picture below suggests! 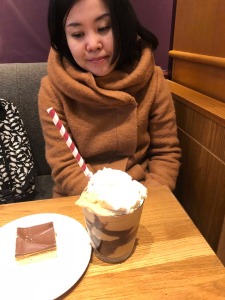 Finally it was time for a bit of culture and the Guildhall (below) was up first. The timber-frame exterior of this 14th century construction was of most interest to me but we did go inside as entrance was free. It dates back to Medieval times and was a building of importance during the time of Richard III.

Leicester Cathedral (below) stands right beside the Guildhall and that was our next port of call. A lot has changed since my last visit in January 2015. A couple of months later Richard III (King of England between 1483 and 1485) was reburied in this cathedral at a time when the football team were bottom of the Premier League and relegation certainties. With King Richard finally at rest, everything really did change for Leicester City. 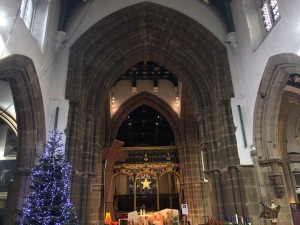 The Tomb of Richard III has certainly helped bring in more visitors to this cathedral including myself as I never actually ventured inside last time. Having Rina with me prompted me to actually go inside though and I was glad we did. It took me a while to get her out of the place! 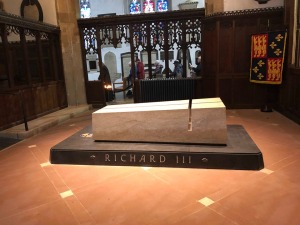 There is a statue of Richard III (below) outside the cathedral on St Martins East which is literally a few metres away from the King Richard III Visitor Centre.

Dare I say it but I was probably more interested in a couple of places just down the road; the King Richard III pub and the BBC Radio Leicester studios. I would return to one of those on another day!

I didn’t really expect to see an official Leicester City shop (below) in the city centre but given the club’s rise during the five year period since my last visit it’s maybe not so surprising. Just a minute or two from their is the Sporting Success statue which was erected in 1998 following a very successful 1996-97 season for the city’s football, rugby and cricket teams. Interesting for me but certainly not for my wife! A new statue (Vichai, Birch, Banks…) really should be built outside the King Power Stadium though!

Bonus: I returned to Leicester a couple more times once my wife had gone back to Japan to return to work. On the second occasion I took a quick peek at the New Walk Museum (below) as it must’ve been 17-18 years since I last visited Leicester’s original museum.

Down the road and on the other side of Nelson Mandela Park is Welford Road which is home to Leicester Tigers rugby club. They were actually playing when I passed by the stadium en-route to the King Power Stadium to watch Leicester City stroll past Wigan in the FA Cup 3rd Round. If the football team hadn’t been playing on the same day I may well have attended the Tigers’ Premiership Rugby victory over Bristol Bears. Indeed I could have done both matches but I really wanted to absorb all that was going on around the King Power Stadium rather than rushing between the two stadiums. 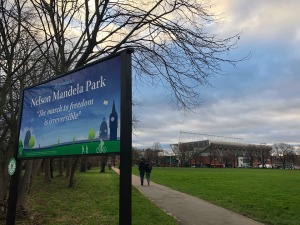 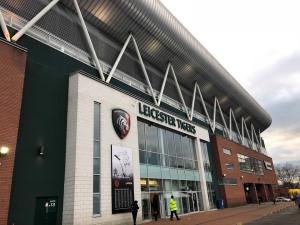 Click here to read ‘Dining Out: “Japanese” Food In England’