After a day of excess eating on Christmas Day it’s always good to get out of the house the next day and, other than the start of the shop sales, the Fernie Hunt meet is the thing to do on Boxing Day. It’s very much a community tradition on the village green in Great Bowden (as well as other places around the county of Leicestershire) where the residents and supporters from across the area mingle over some mulled wine.

Sadly it was a stereotypical British day weather-wise as it was wet and grey so we wondered if it would attract the one or two thousand people that attended in past years. It was probably that hesitation about whether to go or not which meant we sadly arrived a bit late as the last of the horses and hounds were already racing off into the distance to follow pre-set artificial scent trails…or something like that! 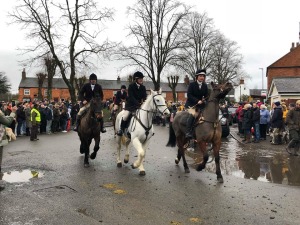 Thankfully we noticed a couple of minutes later that there were still a few horses on the green outside the local pub so wandered over to investigate. As a fox-lover it should not surprise you that I am definitely not in favour of fox hunting. This rural tradition has actually been banned for around 15 years but one has to wonder what really does happen after they disperse on December 26th as well as other days. 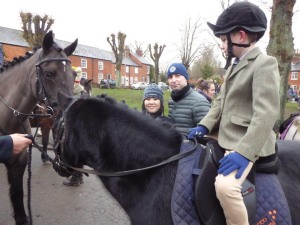 The spokesperson at such events do seem to assume that people are present because they support fox hunting but I’m sure the reality is that many are there to just get out and see friends and neighbours. Legal hunting activities are supposedly showcased to the public and the media but presumably there is far more to it than meets the eye. 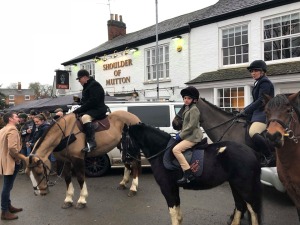 This was my wife’s third trip to England but the previous visits were in the Summer so this was her first time to experience it during the festive season. Having not been back home in five years it was also a long time since I was last able to attend this very rural event. 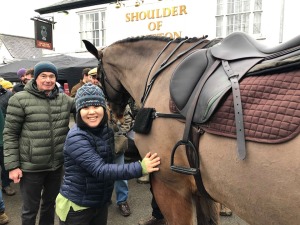 It turned out to be the highlight of the whole trip for my wife who loved the opportunity to get up and close with some of the horses, particularly the first white one seen below. 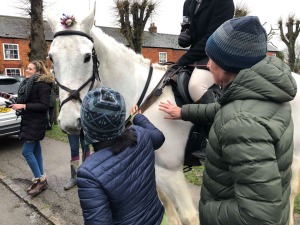 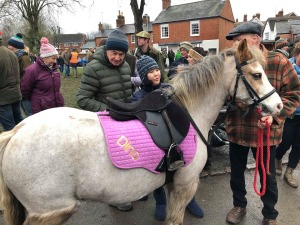 On the way back home we passed the Great Bowden sign which I’ve never looked too closely at despite having taken many pictures in front of it. The bottom right corner of the sign features an image from the Boxing Day hunt.

Bonus: Later that day we went for a short drive to East Carlton Park which was always a favourite place for Fun Runs and picnics when my sisters and I were kids. Sadly Boxing Day was a bit of a rainy day so it was nothing more than a flying visit really. The East Carlton area is renowned for its steel manufacturing which took off in the early 20th century and the heritage centre on site (closed during our visit) contains models and historical information about the steelworks. This skip thing (below) presumably has something to do with that and is what I always think of when the park comes to mind.

Sadly we didn’t get to explore the vast park due to the weather so only saw the playground area near the car park which has a well and an old locomotive among other things.

Rockingham Castle was next but you might not be able to see it in the pictures below thanks to the drizzly conditions. The location of this former royal castle, as well as East Carlton Park, is often stated as being in Leicestershire as it has a Market Harborough LE16 postal address, even though it’s actually in Northamptonshire. 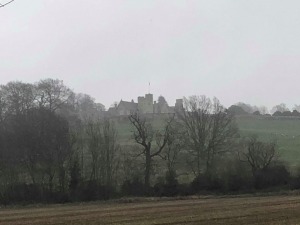