Filbert Street was the home of Leicester City from 1891 until May 2002 when they played their last ever competitive match against Tottenham Hotspur. An already relegated foxes side managed to go out on a high and the man who scored the winner in a 2-1 victory that day was a young winger who had been one of very few shining lights in what had been a pretty awful season.

Matt Piper played 27 games for Leicester and I never saw a single one of them. Well I saw a few of them on TV from the very distant comfort of various hostel sofas in Australia but never in person. Maybe not such a bad thing given how bad that season was with just five victories to their name. The fifth one was that curtain closer at Filbert Street after 111 years. 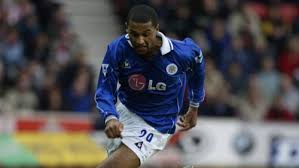 I had only just got back from my round the world travels a couple of days before that final fame versus Spurs so didn’t have a ticket. I listened to it on BBC Radio Leicester. Fast forward 18 years later and he is now the summariser for the station’s football coverage having filled in for his predecessor Matt Elliott a fair bit towards the end of the 2017-18 season. 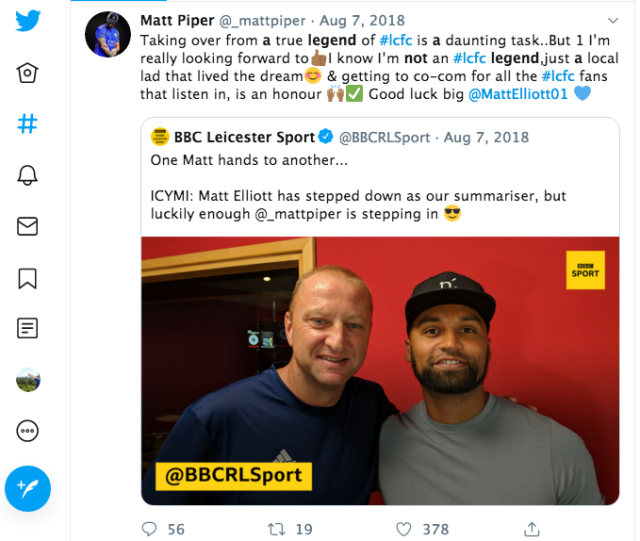 When Elliott moved on to work for the club’s official match day presentation team it was no surprise that Piper took over. I really thought he grew into the job as he first deputised and then took over the role permanently. Despite what he said in the above tweet he is a City legend for coming through the youth ranks of his hometown club and then scoring the last ever goal at the old stadium which held so many memories for fans.

Despite not wanting to leave his beloved Leicester at the end of that 2001-02 season he had no real choice as the club were desperate for the £3.5 million Sunderland had agreed to pay for him. Things didn’t go too well in the north-east and he was plagued with injuries during his three year tenure and ended up retiring at just 26 years old. He then struggled with alcohol and depression before finding his way again as a football coach.

He may have only played a handful of games in the Leicester shirt but he certainly left his mark and as soon as I knew I was going to be on the Monday night Football Forum show (6:00 – 7:00 pm) I was excited about meeting such a knowledgable and intelligent former player who offers a genuine insight into the modern game with humility, practicality, passion and honesty. Mind you it took a while to meet him as he didn’t arrive until one of the show’s opening music themes was playing!

There wasn’t too much on-air chat with Pipes but we did speak whilst one of the pre-recorded inserts played. I had to tell him that I loved his “commentary” on the injury time VAR winner against Everton in December.

This post could probably be filed under “guy meets former foxes favourite and has his picture taken with him” but there is a little more to it than that. We all hung around chatting for a bit “backstage” once the show had gone off-air at 7pm and the highlight was him actually remembering my name (my proper name and not the silly Tokyo Fox moniker I use on the net!) and coming over to me to say how nice the tiny Japanese ‘Thunder‘ chocolate bar I brought for him was! It’s the simple things in life!