Tokyo Daytripper: Japan Snake Center – A Place To Avoid But Not For The Reason You May Think!

Whilst I may not be keen on coming across a snake in the wild I don’t really have a problem with just looking at such limbless creatures …… or even touching and holding them! As I was already in the Ota area of Gunma Prefecture I thought I might as well visit this snake institute that’s been around since 1968 as it seemed like a quite unique attraction with 200 species from around the world. 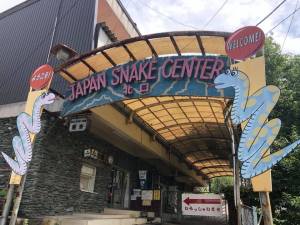 Once I was done at the Ota Yabuzuka stone quarry I walked south for 13 minutes to Japan Snake Center (3118 Yabuzukacho, Ota, Gunma). My research beforehand did tell me that it would cost ¥1000 for entry which is a little excessive for such a place but as I’m highly unlikely to go back to Yabuzuka it was a now-or-never moment. Sometimes you’ve just got to suck it up and not worry about what is not really that much money even though you are paying over the odds. Besides, it is helping out the local economy I guess!

After entering through the souvenir shop it was quite clear that this fairly vast place was a shadow of it’s former self. It had the look of an almost-abandoned zoo as it was pretty devoid of people with empty stages and buildings. One has to guess that it was a much more popular place in the past.

This centre is the home to research into reproduction and general ecology of both local and foreign snakes as well as the venom, and the latter was the subject of my first stop. The Laboratory of Snake Venom doesn’t sound the most appetising of places…and indeed it wasn’t but that was due to the poor ventilation of this run-down building. Hopefully that changed for the snake demonstration and feeding sessions which occur later each day. 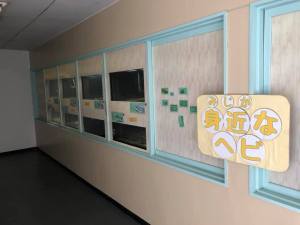 Next door was a rather shabby museum displaying materials relating to snakes such as photos, paintings (local school art work is dotted around the centre) stuffed and skeletal specimens including a five metres long one. The evolutionary process of snakes from ancient times is also shown but the building has fallen into quite a state of disrepair. 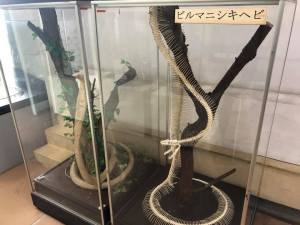 A greenhouse-type room had more exhibits (including some non-snake creatures) and real snakes in it but again the conditions didn’t seem too great with the water pools really in need of a good clean. 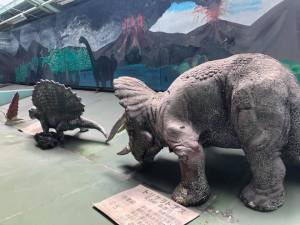 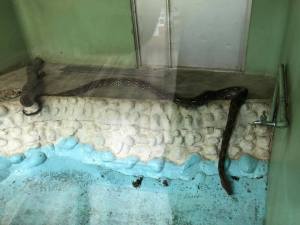 Finally I saw the opportunity for a photograph with a snake which I would’ve done for sure but then I saw that it would’ve cost another ¥1000 for that. That took me a bit by shock I guess given the high cost of entry to such a place! As I’ve had my picture taken with snakes a few times before I decided to pass this time. 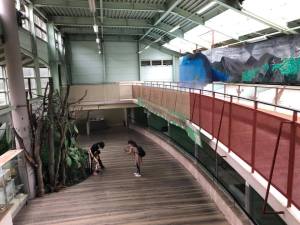 There is another large greenhouse displaying live snakes from all around the world, including the red short-tailed python and a yellow anaconda among others including cobras. Snakes are reptiles which don’t often create too much sympathy from people but I had to feel a little sorry for them left to sit in squalor in barren cages and cells. 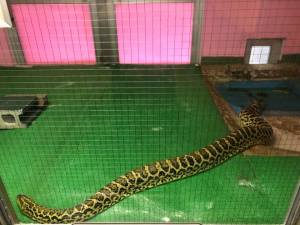 Just outside the souvenir shop was a vending machine selling umeshu (plum sake) but it was a little early in the day for alcohol! 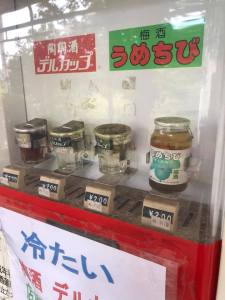 As you can maybe tell I wasn’t too impressed with this place. It’s dirty, overly-priced and very dated. The place is a remnant of the Showa-era and has practically remained unchanged is a more positive way of looking at it I guess. Maybe if you see some of the demonstrations and meal-feeding sessions then it will no doubt be a more enriching experience but I felt disappointed with this centre and my expectations were fairly low beforehand!

Bonus: The proof that I have held a snake or two and wasn’t using the excuse of too much money to chicken out of holding one in Gunma! The first picture below was taken at Snake Temple in Penang (Malaysia) in 2010 and the other one was shot at Snake Farm in Bangkok (Thailand) in 2014.

This hiss-terical shaped sausage was something I ate somewhere in Ikebukuro in 2009. 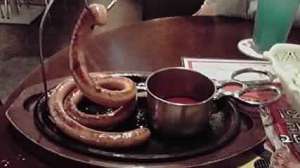 Click here to read ‘Tokyo Daytripper: The Lost World Ruins Of A Stone Quarry In Gunma’

Click here to read ‘Tokyo Daytripper: A Shrine Dedicated To Feet & The Last Remnant Of A Former Haunted House In Gunma’

3 Responses to Tokyo Daytripper: Japan Snake Center – A Place To Avoid But Not For The Reason You May Think!