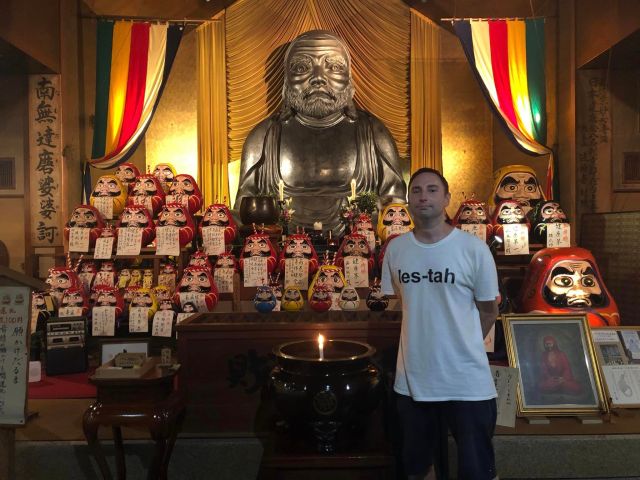 Japan has many symbols of luck and good fortunes such as the maneki neko cat figurines, omamori (protective amulets) and omikuji (paper fortunes) but one of the more interesting ones is the tumbling doll known as daruma. Having been to a few daruma-related places in the last few years it was hard to resist the opportunity to see another when it was so nearby to where I was.

Having ventured over to the west side of Izu and met up with my friend Natasha back in August we spent a day exploring some sights in a region which I had never actually been to despite countless visits to the other side of the Peninsula. We were having lunch at the nearby Toi Goldmine and I was keen to go and see Toi Daruma-dera Temple. We parked up outside this place which only really stands out due to the daruma-shaped billboard outside the complex. 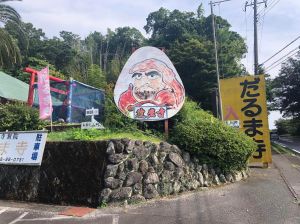 We were met by a friendly but persistent staff member who seemed very keen to guide us around the place. I wasn’t so wild about this but it’s the way things are done and it turned out to just be for the first couple of points before we were left alone to look around. 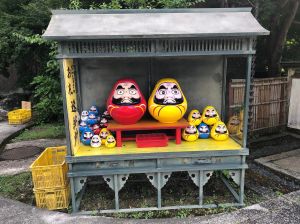 The first port of call was a tiny pond area to the right of the main hall where we poured water on the head of the water daruma statue. The true meaning behind this ritual is to pour the water on the part of the body (the statue not your own!) which is afflicted and then pray for it to be healed. 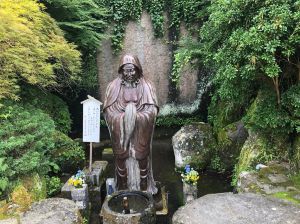 There was a fairly sparse collection of wooden plaques hanging where previous visitors had written down their prayers and wishes as is customary at such places all around the country. 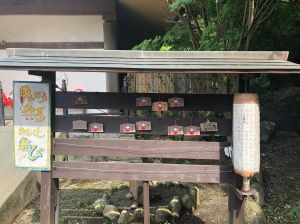 A sizable red wooden daruma doll greets all visitors at the top of the steps at the entrance to the main hall.

Before entering it is worth checking out the white walls on both sides of the doors where a couple of fluffy white daruma dolls floats eerily above collections of red and yellow tumbling dolls. 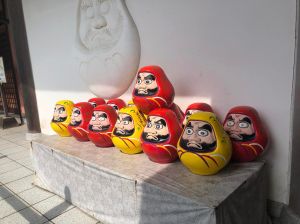 What I was greeted by inside was something I really didn’t expect to see based on my experience of other daruma temples in Shizuoka and Gunma. Japan’s largest seated statue of Daruma Daishi is enshrined there and the shiny black statue has a unique expression and seems very powerful whilst being surrounded by bright coloured  daruma dolls. It is five metres high and weighs three tons. 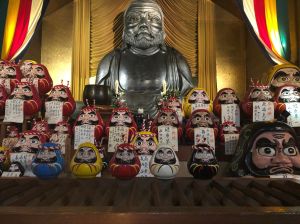 In contrast the daruma dolls surrounding it have a slightly comical appearance with tags for making wishes attached to their bodies. 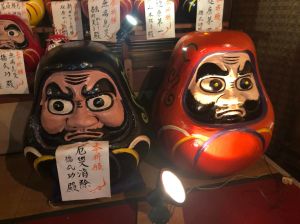 That was it for the main hall but there was more to the place with a vast range of dolls available for sale in the adjoining room that featured a range of interesting and bemused expressions. In fact the souvenir shop seems to be the main focus of this quirky temple, and with the staff eyes preying on us more often than was comfortable we decided to make a quicker than expected exit. The goldmine complex is the main tourist attraction in the area but this place is worth checking out too.