Countless trips to Izu over the last few years have tended to dominate the travel content on Tokyo Fox but absolutely none of it was of places on the west coast of the Peninsula. Whilst the north, the east, a bit of the south and some of the central area are accessible by train, the west really is inconvenient without the use of a vehicle.

I have considered taking a series of buses to get over to that side before (it is possible and I do often have the time!) but always decided against it and thought patience was the key. That finally paid off back in August when I met up with fellow Brit Natasha and went on a road trip of sorts to taking in a few local spots. 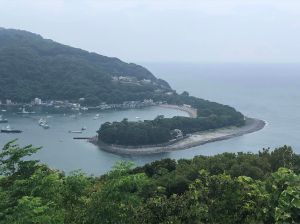 Once we were done at the Heaven and Hell museum, we headed west to Toi along Route 136 and the first stop there was this giant shiitake mushroom. It is actually a Kannon statue praying for traffic safety though one has to think it may cause more accidents as cars speed along and the drivers maybe catch a glimpse of what looks like a woman under a big umbrella! 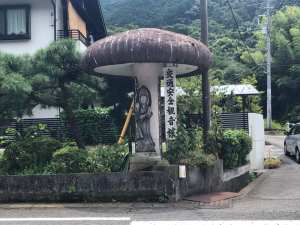 It was quite a long drive (21 km) up to Cape Deai, and though the views were fine, we were unable to see Mount Fuji and get that picture perfect postcard shot. It was very feintly visible. 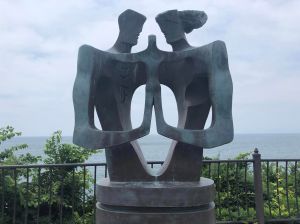 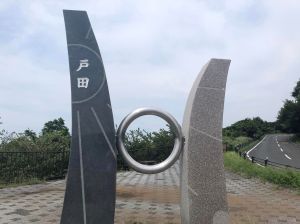 Toi Goldmine is the biggest and most popular sight in the region and we did go there next but only to have lunch! Eating options are far fewer when out west so the complex’s restaurant was the best option. It was very busy so we had to wait for a while just to get seated but eventually we ate some fairly unique purple-coloured soba noodles. 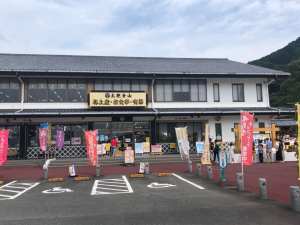 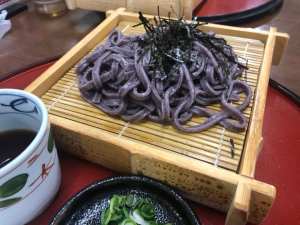 The Daruma (tumbling doll) temple was quite nearby the gold mine so we went there after lunch. 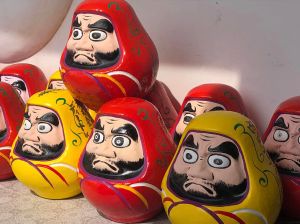 The final two locations for us on the west coast were Lover’s Cape which was a slightly awkward name for two friends to go to! As with Cape Deai, it was just too cloudy a day for Mount Fuji to appear. There is a souvenir shop and cafeteria on the other side of the hand sculpture below.

Just south of there was the intriguingly named Horse Rock which I was a little sceptical of beforehand as such places often disappoint! Lion rock on the east coast of Izu back in May wasn’t actually too bad but this was something else. I was really impressed.

After just one trip to the other side it’s a little too soon for me to say that “West is best” as my loyalties lie on the east but I am definitely keen to visit again.

Click here to read ‘Experience Death Once Before Your Time Is Actually Up!’