Experience Death Once Before Your Time Is Actually Up!

It is said that the only thing certain in life is death. The next world is one you supposedly should not miss, and this quirky little museum in Shizuoka Prefecture hopes to help you experience the world of the Japanese afterlife.

It’s located a short distance from Shuzenji Station and was the first stop for myself and friend Natasha on our day together exploring some sights in an area of the Izu Peninsula previously untouched by me. A smiling red ogre greets you at the entrance of the two-storeyed museum, known as Gokurakuen, which was completed in 1986.

Many Japanese people believe that there are one of six worlds awaiting them upon death, and this place is designed to offer you a glimpse of the next world. There are various exhibitions of death and the afterlife according to Japanese Buddhist beliefs where they believe death is not the end and that you can and will be reborn.

The museum is divided into six worlds; humans, animals, hunger and famine, killing and slaughter, paradise, and hell. The atmosphere inside is quite interesting with the the sound of sutra chanting being pumped out over the public address system.

What emerges after that in the dark hall is a three-dimonsenional diorama of hell, in which small dead people made of plaster are torn apart, burned, crushed and injured by giant demons.

It is believed that hell is located deep underground and divided into eight layers or sections with many oni (Japanese ogre) and other monsters there to torment sinners.

All of the objects on display were made over the course of about seven years by the first owner and his family (wife and three sons) so one can only imagine what was going on in their heads as they created such incredible pieces of art. A definite case of home-made handicraft hell! 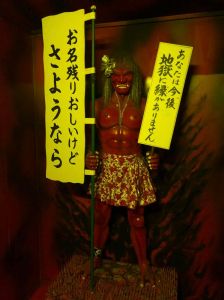 The final destination was not labelled as heaven but was called paradise instead. If this is what paradise is like then it could be a very disappointing arrival for many as this section was a little scarce for all the budget must have been used on portraying hell which is fair enough as that has always seemed like the more fascinating option. 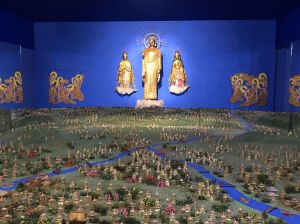 The second floor of the building is an adult museum for those interested in “pleasures of the flesh”. Ideally not the best place to go with someone of the opposite sex who you’ve only just met in person for the first time!! 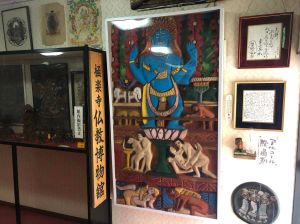 Having already been to a couple of sex museums in Gunma earlier this year I think I have become completely desensitised to anything on show in such places. 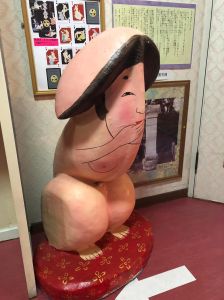 This one was more of the same with some interesting and amusing exhibits including a collection of artwork, photographs, phallic models and so on.

The 48 positions of the Japanese kamasutra are said to be one of the highlights of the adult section, and maybe it was just purely because of the comical sight of a clothed statue with a big tallywhacker protruding from it for guests to touch for good luck!

Click here to read ‘The Temple Of The Toilet God’

Click here to read ‘This Sex Museum North Of Tokyo Is Even Open To Elementary Children!’

A Leicester City fan teaching English in Japan
View all posts by tokyofox →
This entry was posted in Japan Travel, Quirky Japan and tagged Gokurakeun, heaven and hell museum, Japanese afterlife, Japanese buudhist beliefs, Jigoku Meguri Museum Izu, shuzenji, things to do in izu, things to do in shizuoka. Bookmark the permalink.

2 Responses to Experience Death Once Before Your Time Is Actually Up!