Due to parts of ‘Kill Bill’ being in Japanese (which aren’t subtitled in Japan) I didn’t get into it on my first viewing back in 2004 but when I saw it again five years later my mind was completely changed and I really enjoyed it. It’s very questionable whether this should even be included on Tokyo Fox as, even though it’s ‘set‘ in Japan, two of the main locations were actually filmed in China.

The Bride (Uma Thurman) flies to Okinawa to visit retired sword maker Hattori Hanzo (one of Bill’s former tutors) to aquire the perfect sword needed for her revenge attacks. The sushi bar (below) and workshop (46 minutes) were made in the Beijing studios. 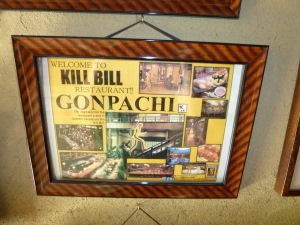 Tokyo appears for real on screen after 65 minutes when we see O-Ren Ishii (Lucy Liu) being driven over the illuminated Rainbow Bridge. 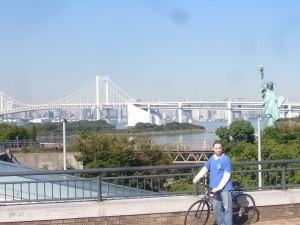 The Bride trails her on her motorcycle through Shinjuku along Yasukuni-dori (below) one minute later as she heads to a restaurant. 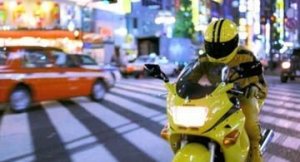 That restaurant is ‘Gonpachi’ at 1-13-11 Nishi-Azabu in Minato-ku which served as the inspiration for the ‘House of Blue Leaves’. This very nice, cavernous, rustic-themed place was not actually used though as a similar looking one was built on a soundstage in the studios in Beijing.

It was used for the extensive and bloody slice and dice one-against-all scene which precedes her showdown with O-Ren outside that place in the snow. This popular restaurant is fairly expensive but does have a good, cheap lunch menu deal and soon fills up. My photos below were shot before the place opened which is why it’s empty!