Australia 2019 Pt XI: You Can Take The Man Out Of Japan But…

Writing about non Japan-related things on this site usually sees a notable dip in hits but I remain stubborn to my philosophy that posts should mostly be about what I’ve done or where I’ve been rather than what I think will get the most clicks. After ten consecutive Australia posts this one is actually about Japanese things but I warn you now that some of these are fairly suspect!

Precious moments on this trip to Melbourne were spent with my nephews and nieces and I was quite surprised to hear that they are all studying Japanese. That’s got nothing to do with me or my wife but it seems it’s actually quite common to learn it in Australia. As soon as I was able to, I went with the kids to see their school. My sister said she’d see if I could watch one of their Japanese lessons but as a non-Japanese person I didn’t feel too comfortable doing that. Also, I didn’t want to intrude on the teacher’s space as I find it quite annoying when people come to watch my lessons. I was more than happy to see the Japanese classroom though which my youngest niece showed me. The best part of it was the giant red circular rug in the middle of the room which resembles the Japanese flag.

What was very noticeable to me this time in the Melbourne CBD was the number of Japanese restaurants. There were many of them and, needing to take a break from the heavier Western-style food, I was keen to see how their dishes measured up against the real thing. There are a few Don Don restaurants around Melbourne and this was one of the restaurants most recommended to me. I went to the one on Lonsdale Street early near the start of my trip and had buta teriyaki don (pork teriyaki bowl) for a very reasonable AU$7.60.

Seven days later and I was back at Don Don albeit a different one. This time I went to the
one on Francis Street for lunch with my friend Haruka who had (at that time) just moved down to Melbourne having spent a fair bit of time in Brisbane. 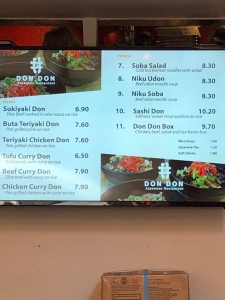 She had sukiyaki don and I went for tofu curry don as she thought that was the most unique dish and something that you don’t get back in Japan. It maybe doesn’t look too appetising based on the photo but it was really nice and did manage to replicate that authentic Japanese taste. Tofu in such a dish is new for me but it actually complimented the curry quite well.

The timing of our meet-up was quite lucky as when we left there was something of a queue outside the fairly nondescript building. 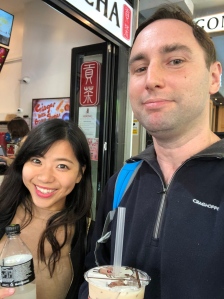 After getting a Taiwanese-style bubble tea we went to another place as I was still hungry. It was also my last day in the city so I had some money to get rid of and didn’t want to waste the opportunity to try some foreign-style sushi. Most of the sushi was of the bastardized variety which I’m actually a big fan of! There were plenty of inari (aburaage tofu pouches) stuffed full of the likes of seafood, mushrooms or seaweed which were all fairly novel for me.

There was a similar-style sushi place more locally that sold variety sets as well as individual pieces including inari and other appetising delicacies akin to the California roll. Things like rainbow rolls and panko prawn nigiri were covered in sauce which I guess is the way to make them slightly more appealing to the western taste.

The two restaurant photos below were only taken for their names with the second one the most interesting and funny as chinchin is the name of the man’s anatomy in Japanese!

Another Japanese female I know who lives in Melbourne at the moment is Ayako and I met up with her and her boyfriend in a bar at Southern Cross Station for about an hour just before I had to go to the MCG to see an Aussie Rules game. 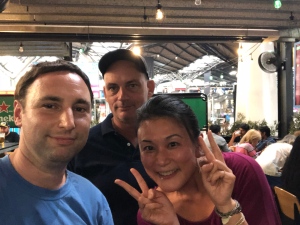 I certainly wasn’t expecting any Japanese links at Brighton Beach but among one of the beautiful, coloured huts was the famous Hokusai painting of the ‘The Great Wave off Kanagawa from the ’36 Views of Mount Fuji’ series. 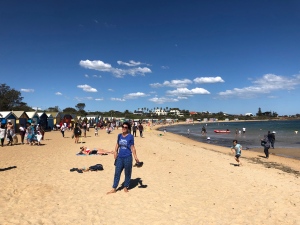 The Chinese Garden of Friendship in Darling Harbour (Sydney) actually doubled up as the the “Tokyo” temple in ‘The Wolverine‘ (2013). The funeral part begins and ends at Zojoji Temple but the major action scenes were shot 7,800 kilometres (4850 miles) away in Sydney. 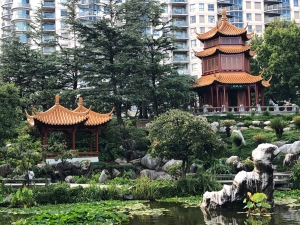 Bonna Point Reserve was also the backdrop for some “Nagasaki” scenes in the aforementioned movie. These were blended in with scenes shot in Omishima and Tomonoura in Japan.

The final Sydney photo relating to Japan is of the clothing retailer Superdry which specialises in purposely using strange Japanese purely for fashionable purposes. I knew their stores were all over the UK but didn’t realise they had gone global. I doubt if we will ever see such a shop in Japan though!

Some Japanese sporting connections next. Former Samurai blue international Keisuke Honda now plies his trade with Melbourne Victory in the A-League and on the day of my arrival in Australia my nephew and I went to see them play against Brisbane Roar at the Marvel Stadium. 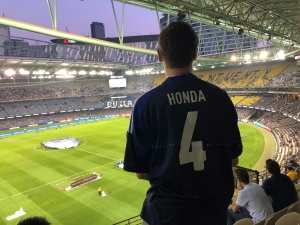 Talking of Honda, they supply engines to the Toro Rosso and Red Bull Racing team in Formula One so in a way I also saw the Japanese motor company represented at the Australian Grand Prix on my opening weekend Down Under. Lame I know!!

Maybe not quite tenuous as that is the place where a great moment in Japanese sporting history took place in January this year. I have been following the fortunes of Naomi Osaka closely since the Australian Open in 2016 and so seeing her win her second consecutive grand slam tournament three years on was a special moment. The place where she won it was the Rod Laver Arena in Melbourne Park.

Click here to read ‘Australia 2019 Pt XII: Dining Out Down Under’

1 Response to Australia 2019 Pt XI: You Can Take The Man Out Of Japan But…