In Loving Memory Of “Momiji”: A Tribute To Our Beloved Family Dog (Video)

“She’s the glue that binds the family together”

That quote above is something I said a few years back as she really did do so much to heal and bring the family together. Some people will probably roll their eyes at such statements but those who have or have had pets will understand the sentiment behind this post.

My wife has long credited Momiji as saving her family. That stuff really is too deep and personal to get into on here but what I can say is that she played a really important role in bringing their family back together. She also played a hand in my wife and I getting together. Whenever we took her for a walk we often let her decide where to go which resulted in us exploring many unknown areas in our neighbourhood of the time. One day she led Rina to my workplace which resulted in her enquiring about a job at the school. She got it and that is how we first met in January 2011. 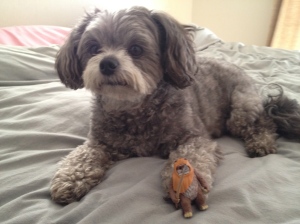 Momiji was a Chihuaha and Poodle mix which is sometimes known as chipoo in Japanese. She was born on 24th August 2008 and she was chosen by my mother-in-law and wife the following month. It was four years later that I met her as my relationship with Rina began to get more serious and I was invited to their family home of the time. There was thankfully an instant connection and it was one that would grow and grow over the years.

She may have been a small dog (she weighed less than four kilos) but, like many dogs, she was big in heart and had so much love to give us. Being greeted so affectionately at the door by her every time we came home is something all dog-owners can empathise with. Even if we only popped out to the supermarket for 5-10 minutes she would still be so happy to see us again. The feeling was of course mutual. 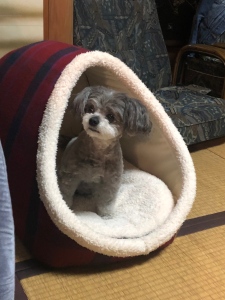 She was a very smart and well-behaved dog who had a wonderful life in the loving care of my parents-in-law and she would often come to stay with us for a week or three here and there. I’m sad to say that my parents-in-law don’t feature in the video as much as they deserve to be but I tended to take photos and videos of her mostly when she came to stay with us. I have poured my heart and soul into making this video and I really hope it shows the strong bond she had with my wife.

The day we’d all dreaded came sooner than we thought and she sadly passed away in the arms of my wife in the middle of the night at the beginning of the Summer just gone. When I hear of other peoples’ dogs living a few more years I do feel a little sad that she was taken from us too soon but her ten plus years of life was a fairly eventful one (as far as dogs lives go!) and she got taken to many beautiful places around the country.

We were all completely devastated when she went to heaven but will always be grateful for the great job she did in giving us so much love and affection. She will forever be missed.

4 Responses to In Loving Memory Of “Momiji”: A Tribute To Our Beloved Family Dog (Video)