This Tropical Plant Dome In Tokyo Certainly Hits The Target!

When I read something about this tropical plant dome at Halloween I really believed that it was my first time to know of the place. However, it seems I passed by it en-route to Dinosaur Bridge (a.k.a. Tokyo Gate Bridge) in February last year and was truly impressed by the structures. I wanted to investigate then but forgot all about it once I was done at the bridge. 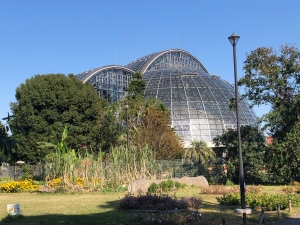 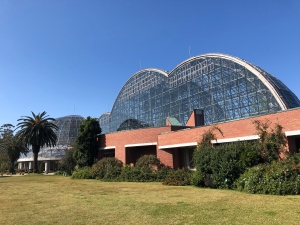 22 months later and, having visited the tropical greenhouse with my wife, I realised that it was the same place I had noticed on that bike ride to the aforementioned bridge. It was the collection of giant pumpkins on the dome’s front lawn which brought this dome (back) to my attention at Halloween and I was quite surprised to see they were still on show when we went there in early November. 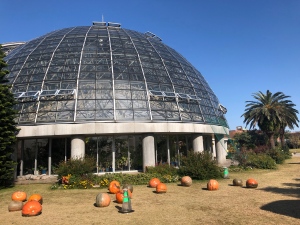 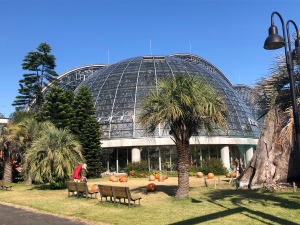 Yumenoshima literally translates as Dream Island which is quite ironic maybe given that it was once a trash island. Images from ‘Isle Of Dogs‘ (2018) may come to mind but it’s nothing like that really as this plot of land has been transformed into a very pleasant area with tropical plant glass domes the highlight. However, there is a garbage incinerator in the distance but that’s a far cry from the colourful Maishima Incineration Plant in Osaka.

The nearest station to Yumenoshima Tropical Plant Dome is Shin Kiba on the Yurakucho Line which is about 10-15 minutes away on foot. Tokyo Disneyland and Tokyo Sea Life Park in Kasai Rinkai-Koen Park are just one or two stops away from there. Disneyland of course needs a full day but the latter could easily be combined with these tropical domes which very much remind me of the far bigger Gardens By the Bay in Singapore that my wife, mother-in-law and I went to in November 2015. Entrance is a snip at just 250 yen but some people may be interested to know that an annual pass can be purchased for 1000 yen. 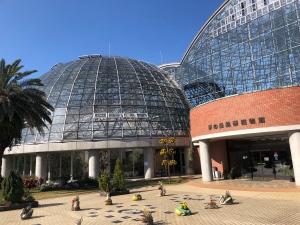 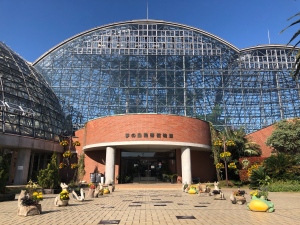 The inside is divided into three alphabetised zones and the first one’s (Dome A) main feature is a pond covered in giant water lilies with woody ferns at the edge. 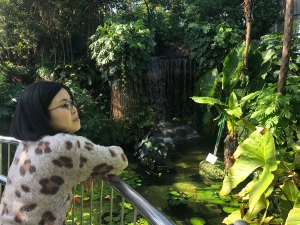 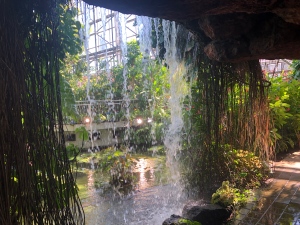 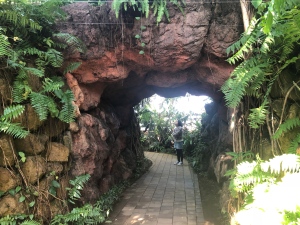 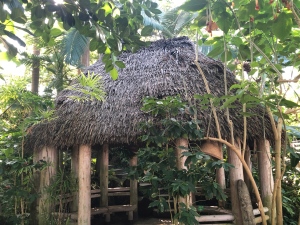 B Dome is a tropical house in a grove of palms surrounded by plants with beautiful flowers and edible fruits like bananas, mangoes, durian (preserved in a glass case) and cacao; the beans of which are used to make chocolate. 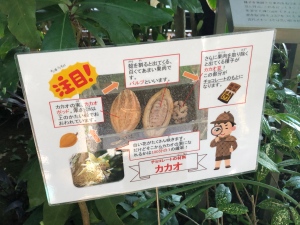 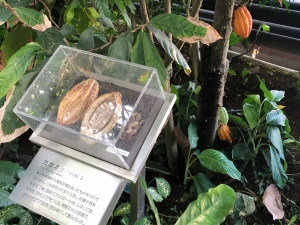 The final dome house (they are all connected and kind of blend into one) is devoted to plants from Tokyo’s subtropical zone of Ogasawara which is 1000 kilometres south of the capital city. 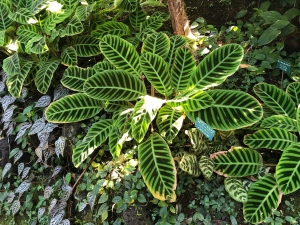 What occupied most of my interest though were the dome structures themselves and the architecture of the roof was one that I was fascinated by. 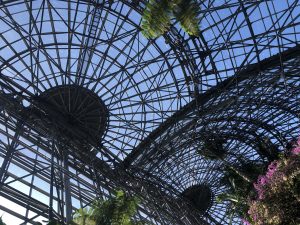 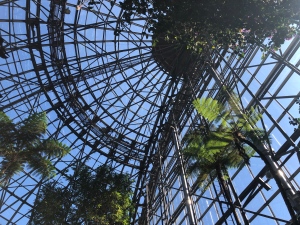 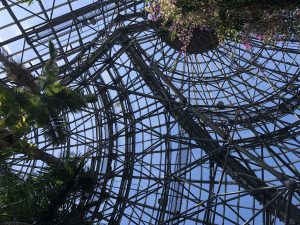 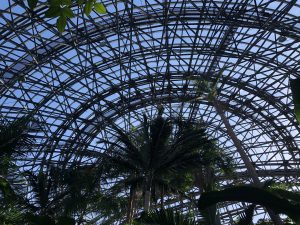 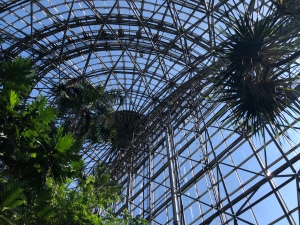 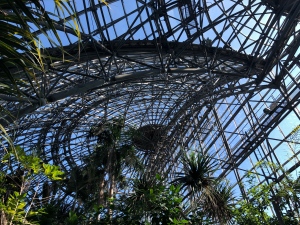 Tokyo Yumenoshima Marina (below) is located to the rear of it and can be accessed via a back door for a nice break from the warmth of the dome as well as a lovely, pleasant view too.

There’s far more to Ethiopia than the images shown in the original Band Aid video for ‘Do They Know It’s Christmas?‘, the lyrics which many people feel perpetuate stereotypes of conflict, poverty and diseases as the single story for the whole of Africa. Not for me though as I’ve been to an Ethiopian restaurant in Tokyo and have now seen the special exhibition on the country at Yumenoshima Tropical Dome! 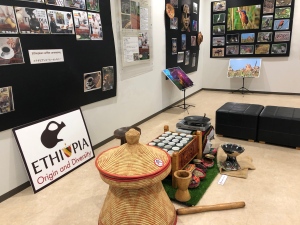 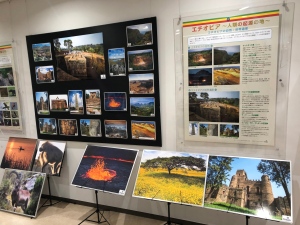 Admittedly, my knowledge of Ethiopia is still fairly limited so this exhibition did open my eyes up a bit to a place that I’ve been quite ignorant of. Little did I know that there is an Ethiopian red fox (it has other names!) and there were a few photos of them as part of the display.

There were some traditional Ethiopian clothes to try on so I couldn’t resist posing in one of them next to the huge inflatable globe. 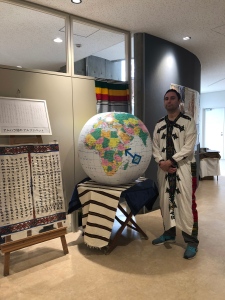 A tea lounge is part of the dome’s facilities but we didn’t consume anything there as we were going for a late lunch in Toyosu, just two stops back up the Yurakucho Line. Construction work of some sort is being done right outside the tropical plant dome and the fence surrounding the site has been jazzed up with lots of these cute, funny animal “windows”. I have since seen the same in other parts of Tokyo so it’s certainly not unique to Yumenoshima. 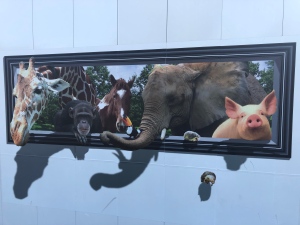 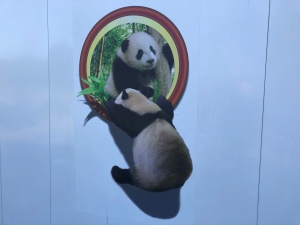 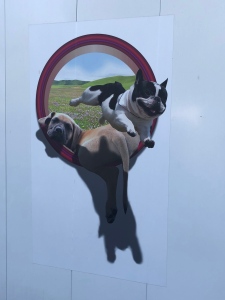 On the way back to the station we passed by Yumenoshima Park Athletic Field main home of Sagawa Express Tokyo SC before they merged with their Osaka-based sister club relocated to Shiga. FC Tokyo U23’s play there from time to time too. 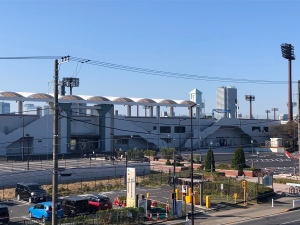 Not so far from that stadium is the area which will play host to the archery in the Tokyo 2020 Olympics. I did actually win tickets for one of the days but unbelievably I ended up winning tickets for two sports on the same morning so will probably end up going to the other event which is hockey. Archery or not, this is something of an unknown area of Tokyo which is worth taking a stroll around.

2 Responses to This Tropical Plant Dome In Tokyo Certainly Hits The Target!