It’s a little sad that for over three decades now my only images of Ethiopia are the ones from its famine in the early 1980’s which featured in the Band Aid video ‘Do They Know It’s Christmas Time?’ (1984). That song, which has been recorded in four different guises now, has undoubtedly done a lot of good and raised millions and millions of pounds for good causes but there is the feeling among many that it’s lyrics perpetuate stereotypes of conflict, poverty and diseases as the single story of the whole of Africa.

Back in October though, I saw ‘Anthony Bourdain: Parts Unknown‘ (S06E06) on CNN which showed the country in a completely different light to those African images portrayed by Band Aid. It really opened up my eyes to this country and with it being a show focusing on food, I set about finding a restaurant in Tokyo which specialises in Ethiopian cuisine. 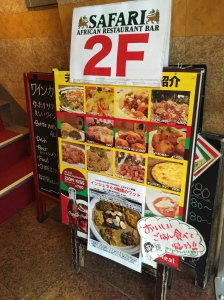 What I found was ‘Safari African Restaurant Bar’ in Akasaka and last week I popped along for an early lunch on my way to work. Lunch is served between 11:30 and 2:00 pm (dinner is from 5pm till late) with the speciality being the Ethiopian curry set that sells at a cheaper price (850 yen) at this time of day.

The 24 seat restaurant and bar is a cosy little place decorated with various African pictures, signs, maps, flags and photo’s. It was empty on my arrival at about 11:45 am but as we hit lunchtime it started to fill up as a few others came and went. 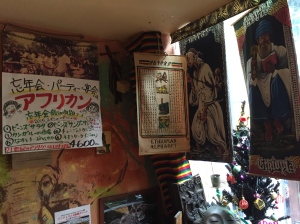 Whilst I’m no stranger to African food having sampled cuisine from the likes of Cameroon, Ghana and Egypt, it is north African fare which I’m far more familiar with having actually visited Tunisia and Morocco as well as restaurants in Tokyo like L’Azure and Alandalus which specialise in the food of those countries. This wasn’t actually my first taste of Ethiopian food as I recall sampling some at the African Festa 2007 in Hibiya Park.

This restaurant sells many different types of African food but the curry seems to be its signature dish and the waitress told me that the chef was Ethiopian. As I was tucking in to my food, the chef appeared from the kitchen to say hi and see if it was all okay. He went through the process of making it and explained that it was flavoured in part by onions chopped into tiny pieces and takes 5-6 hours to make each time it’s made which is every 2-3 days. The plate is split into two curries; Ethiopian on one side with chicken and the other with types of beans mixed in and both are seasoned with around a dozen spices and it really was delicious with a fairly strong after-taste. 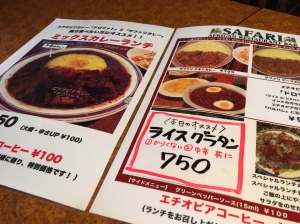 The chef couldn’t believe that I had cycled all the way from Itabashi-ku (the newish home of the Tokyo Fox Global Operations Centre, no less!) as we continued to chat and I bombarded him with questions about the place. ‘Safari’ was originally in Shinjuku in the 1980’s before moving to it’s current home in Akasaka where it has been for about eight years now. It isn’t too far from the likes of Hotel New Otani,  Hooters, Hikawa Shrine, 21-21 Design Site and Tokyo Midtown which have all featured, in part, on this site in recent years.

Whilst I will continue to use the Band Aid song as a jigsaw listening exercise during adult Christmas lessons (a tradition that has been running in some of my lessons since December 2008) I will be doing so with a little bit more knowledge of Ethiopia.