The least regular series is back on Tokyo Fox for the first time in six years, and a decade on from the inaugural TF Recipes post! I actually had the idea to do this particular “dish” many, many years ago now but then forgot all about it until very recently. 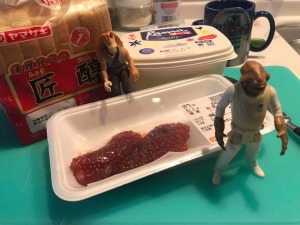 No need to go to a galaxy far, far away to find these ingredients!

Red caviar a.k.a. salmon roe (ikura in Japanese – a word which is also used to ask how much something is which leads to a whole host of hilarious jokes every time the word is used!) is one of the more commonly less appealing types of sushi for those from abroad. I just hated it’s appearance during my initial years in Japan. I had tasted it a few times and did think it was ok but was just put-off by the look of it. Many years on and I don’t really have any problems with it but that’s when it’s just a tiny amount filling a gunkanmaki (an oval, hand-formed clump of sushi rice with a strip of nori wrapped around its perimeter to form a vessel that is filled with the salmon roe in this case!) so it’s not such a problem.

However, eating a lot more of it……AND on toast is another thing entirely. Here are the four basic steps to follow for making this authentic (?) Japanese dish……

Step One: Having assembled your ingredients, put one or two slices of bread into the toaster for 2-3 mins.

Step Two: Spread butter on the toast (if desired) followed by the ikura which actually looks like it could be jam from afar! It certainly doesn’t spread like that though and is a little difficult to pull apart without a knife! 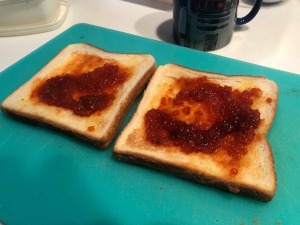 Step Three: Put the ikura-on-toast back into the toaster for 1-2 minutes extra.

Step Four: Put the ikura-toast in your mouth, eat and enjoy!! 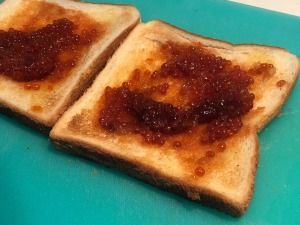 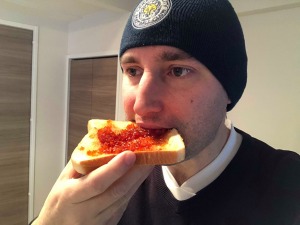 But what did it taste like I hear you ask. Only one way to find out!!

Now usually that line signals the end point of these posts but this time I will actually reveal that it tasted awful and nearly made me vomit! I finished one slice and binned the other! With the Corona Virus dominating the news recently, such home-based blog content may be the future of Tokyo Fox! Luckily, there is a fairly substantial number of drafts waiting to be published but on the basis of this one I hope that the next ‘TF Recipes…’ post doesn’t come for a few more years!!