TF Flashback: Back To Australia To See Family, Revisit Some Old Melbourne Haunts & Go To Tasmania For The First Time (2007)

15 years ago was the first time for me to be back on Australian soil since my 12 month working holiday visa ended in February 2002. My eldest sister had only just given birth to her first child and it really wasn’t long before I was holding the baby! And changing his nappy too! 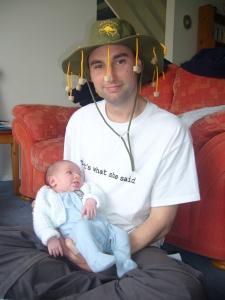 He looked pretty worried at first but probably not half as scared as I was having never been near a baby before in my life. He was supposedly born bigger than most babies but he seemed tiny to me and despite initial looks of fear he soon did what does best and fell asleep as we walked to the local beach and on to the pub for a quick beer.

The following morning we took him to the colourful huts on Brighton beach and to Pin Oak Court which portrayed Ramsay Street in the iconic TV soap ‘Neighbours‘. He was so overcome with excitement and emotion that he slept through the whole experience! 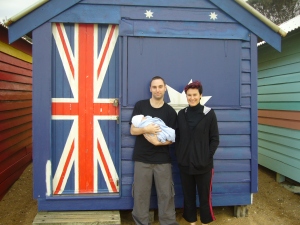 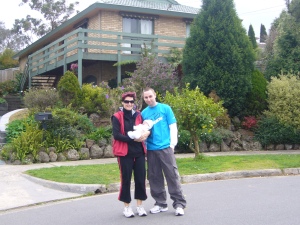 During my working holiday year in Australia in 2001 I spent about a third of that time in Melbourne living in St Kilda so I was looking forward to taking a trip down memory lane. I first found my bearings back in Melbourne city centre and did a bit of shopping before visiting the recently opened Eureka Tower and its 88th floor observation deck where I could see great views of Melbourne and the surrounding area.

Melbourne Station, Crown Casino, Albert Park, St Kilda, Luna Park, the Shrine of Rememberence all followed after that on my journey of nostalgia.

There was an Aussie Rules Football game at the MCG so I went to see that although the famous cricket ground was far from full. The clash between Hawthorn Hawks and Brisbane Lions was still a good atmosphere for me to be able to savour and the third quarter was particularly exciting as the Hawks ripped through the Lions’ defence.

After the match I popped in to visit my cousin Dan on what was my final night in Melbourne before going to Tasmania the next morning.

It was my first time to visit Tasmania and on arrival in Launceston I went out straight away to Cataract Gorge, the undoubted highlight of the area, where I took an easy stroll along the riverside trail to Kings Bridge. I got talking to a couple who offered me a lift to the power station lookout at Duck Reach which was two kilometres away on foot, and on top of that they also drove me to Trevallyn Dam where we spent quite a long time waiting for a log or two to make its way towards the edge before plummeting. An anti-climax if ever there was one! 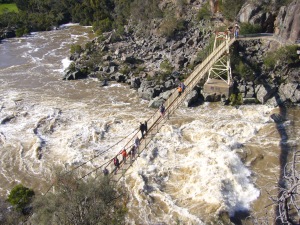 After that I had a go at cable hang-gliding which was something I had read about and wanted to do. As I glided over the edge of the cliff and across the valley to my destination 200 metres away the feeling was quite good but nowhere near as stomach-churning as I’d hoped. Still, what can you expect for just A$20?!

Even though it was Winter and out of season I never expected to be the only one on the tour to Cradle Mountain the next day. It appears that I was very lucky with the weather there as it’s supposedly only nice for about 20 days a year! The upside of being the only tourist was that I had more control over what we did and this included such cheesy tourist photos of the wombat and kangaroo road signs. 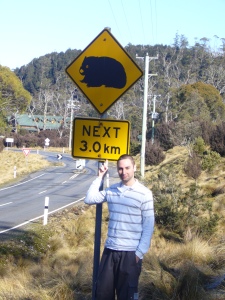 Once at Dove Lake I could see the beauty of Cradle Mountain standing before me. The only decision I then had to make was whether to walk around the lake or climb up to the Marina Lookout. Thankfully I took the latter option and chose the easy track which wasn’t so easy for the fact that the middle of the path was very icy plus it was also very boggy in places, and my foot went in a couple of times which wasn’t too pleasant!

I must have only seen about a dozen people on the whole climb and descent which took about two and a quarter hours, and it was lucky that I did see them as a couple pointed out a wild wallaby to me which I would probably have missed. Another pair were on hand to take some photos of me at the top which was great as the views were magnificent with the reflections of the mountain in the lake waters providing an amazing spectacle.

I inadvertantly took the difficult route down which was actually a lot easier as it wasn’t so icy, and with the steps and chains to hold on to it was far quicker than the other route which was important as I was needing to get back to the driver fairly quickly to move on to the next place. 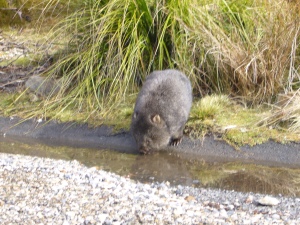 As we left the beautiful serenity of the mountain and lake behind we saw a wild wombat which was a bonus for me and further benefit was seeing the famous Tasmanian Devil albeit at a conservation sanctuary.

We stopped off at Ashgrove Cheese Farm on the way back to Launceston to sample a wide variety of cheese made on the premises and I even purchased a few wild wasabi cheeses as novelty presents. All in all it was a very pleasant day trip and I was pleased with what I had seen.

The next morning I moved on to Hobart and had to make a pretty quick decision on arrival regarding what I’d do that that afternoon and the following day. Mount Wellington summit was the destination and it was absolutely freezing at the peak. We waited patiently for the cloud to clear which it eventually did a few times for a matter of seconds. 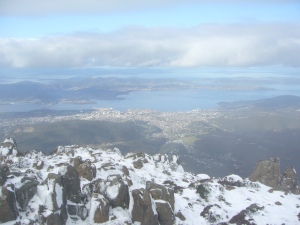 Back in Hobart city I walked around Salamanca Place and Battery Point which were fairly pleasant areas of sandstone restaurants, shops, galleries, craft shops and offices but nothing too special in my mind. I later ended up in the wharf area where I had fresh fish and chips on one of the many seafood barges.

I’m not usually a fan of tours but without a car in Tasmania it was quite difficult to do  much so I went on a day trip to Port Arthur which was very much my second choice! However, there wasn’t a trip to see Wineglass Bay on the east coast on the only day I had available to me.

The small town of Richmond was the first stop of the day. This British style village is  famous for Australia’s oldest bridge in use dating back to 1823.

Then it was off to see Waterfall Bay which offered the usual splendid coastal views and rock formations. 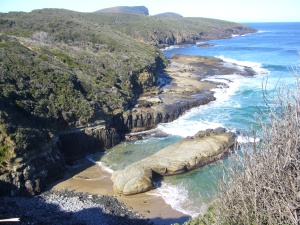 Following that walk we drove through a small town called Doo where all the houses had hilarious (?) doo pun names such as ‘Much A-Doo About Nothing’, ‘Just Doo It’, ‘Love Me Doo’, ‘Doo Me’ and inevitably ‘Doo F*ck All’!!

After lunch at the Remarkable Cave we entered Port Arthur which is actually Tasmania’s most popular attraction, and is the penal colony used during the time of first convict settlement in Australia. It has a very dark history. We hopped straight on to a half hour cruise of Carnarvon Bay taking us around the Isle of the Dead where over a thousand people were buried in a secure and undisturbed resting place. We had two and a half hours to tour the site at our leisure. 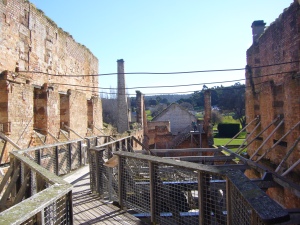 My flight back to Melbourne was at 6am the next day and once back in Melbourne I took a tram to the Royal Melbourne Zoo as I felt I should see kangaroos and koalas whilst down under! The kangaroos were fairly free and the emus were roaming around which made me feel a little paranoid as I posed for a photo or two in front of them.

Australia was really the place that gave me the travel-bug all those years ago and had became forgotten in some ways due to all my Asian trips in-between visits. I do remember suffering a bit of reverse culture shock at first as I just wasn’t used to being in English-speaking countries. This little trip certainly made me remember what I had liked about the country and why I had gone down under in the first place.

Click here to read ‘It’s 20 Years To The Day Since My Travel Days Began But Are They Now Over?’

1 Response to TF Flashback: Back To Australia To See Family, Revisit Some Old Melbourne Haunts & Go To Tasmania For The First Time (2007)