The man-made island of Odaiba played host to the Tokyo Motor Sport 2008 expo on Sunday 5th October and Ethan and I went there to see what was going on. It was a lovely sunny morning and a rare chance to see a couple of Formula One stars (namely Honda’s Jenson Button and Toyota’s Timo Glock) burning rubber for free although it was quite difficult to see anything much unless you paid 3000 yen for a grandstand seat.

Apart from putting the cars through their paces around a tiny circuit, spinning the cars and looking at a couple of classic F1 cars there wasn’t too much of interest for me at this event.

There were plenty of rally, F1, Formula Nippon, Super GT (and so on) cars to look at and inevitably a load of stalls for the merchandise hungry Japanese. Oh yeah, and there were a few pit-lane babes there who were very pleasing on the eye.

After a couple of hours there we made our way home via foot over Rainbow Bridge which took over an hour but most importantly saved us money at a time when I had to really stretch it. 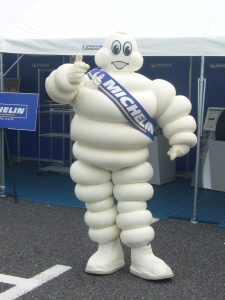 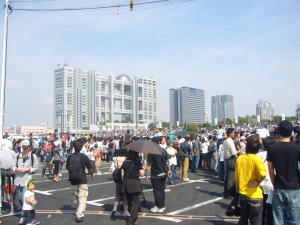