Dining Out: Wan Love At A Tokyo Dog Cafe

When you’ve lived in Tokyo for a while you kind of get used to seeing quirky things and they often just don’t even register in your mind as being unusual. This type of cafe was one such example and is probably a good example of something that would be of interest to people overseas and might feature on TV when talking about Japan.

As my girlfriends mother was staying at ours recently with her very cute dog we all ended up going to this Dog Cafe after we had taken “Momiji” (for that is the name of their family dog) to Toyama Park where I got to see Hakone Yama which I never had time for on my Halloween Cycle trail expedition last October. Whilst in Waseda after that we came across ‘Howls Cafe & Shop’ at Nishi Waseda 3-21-5. 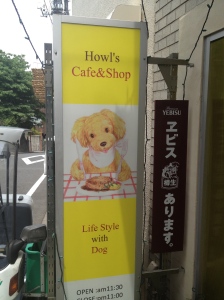 Amazingly, this place for dog lovers was fully booked for lunch on the day we turned up unannounced. Luckily, we were very early so were told that if we were done in an hour then it wouldn’t be a problem and trust me when I say that 60 minutes was enough!! 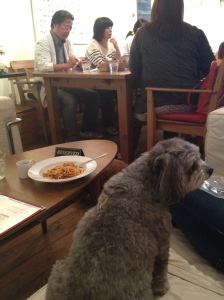 The dogs in the place were all free to roam and sniff each others bums as they tend to do and whilst they did that we set about ordering our fairly simple, but very nice pasta dishes. With pets not often being welcome at most Tokyo restaurants I guess its refreshing for owners to be able to take their ‘best friends’ to this kind of place where they can order some dishes (ranging from 240 yen) from a special dog menu which Momiji is kind of reading below! The number one dish is a type of  chicken meat which is handmade on the premises. 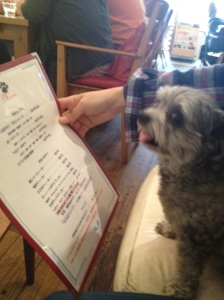 In March 2012 I wrote an article on here about things in Japan which I’d love to confine to room 101 and one of them included accessories and particularly the way dogs are often carried everywhere and pampered with clothing and other such treats not usually given to pets. Well this place was proof of that and while I can admit there is an element of frivolous fun to it all, it is a bit much at times. One dog was later wheeled into this place in a pram and he was wearing a hat! I sh*t you not! A shame I couldn’t get a photo of that but it does show the ridiculous levels to which some Japanese people treat their pets. 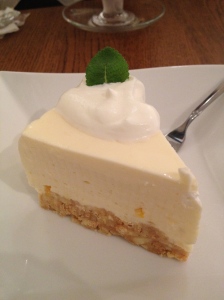 Even though it wasn’t so relaxing eating the main dishes with the dogs wandering around and getting in the way we still decided to share a huge piece of cheese cake which was absolutely delicious. I wasn’t planning to blog about this place but once inside the place I realised it was more perhaps more unique than I realised and so I started taking all the pictures seen here thereby making me quite Japanese as they sure love to take snaps of their pets. 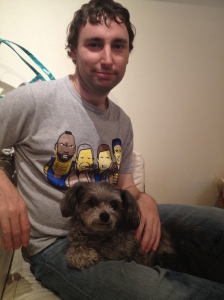 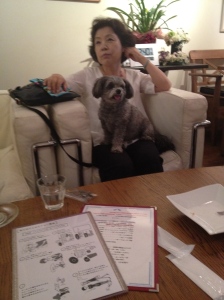 The dog cafe was an interesting experience but I can’t see too good a reason to go to such a place without your own dog in tow. My girlfriend probably wouldn’t mind going to one of the city’s Cat Cafe’s but thankfully my allergy to our feline companions will halt that!! 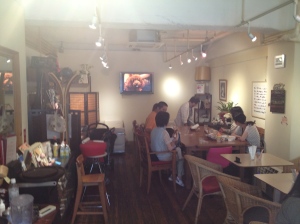 * The title of this blog entry derives from “Wan” which is the sound dogs make in Japanese (as opposed to the English “woof”) and was something that surprised me when I came to Japan all those years ago as I just assumed all animals had the same noises the world over!

9 Responses to Dining Out: Wan Love At A Tokyo Dog Cafe