An Old Style Public Onsen All To Ourselves

It took me a while to really appreciate them but there’s something special about taking an onsen (hot spring bath) in Japan. The downside for me is of course that you have to share the waters with a load of other people! The dream then is to find one which you have all to yourself, and that is pretty much what happened to me in Izu recently.

My father-in-law asked me one afternoon if I wanted to go to an onsen. I accepted his proposal of course and said that I’d prefer an old style one as they generally have more charm and character than the brand spanking new complex style ones. The result was a trip to place called Fujiyoshi Onsen (1305-8 Futo, Itō-shi, Shizuoka-ken) which took a while to find by car. Even when we got to this place it wasn’t so obvious where the baths were. Having found them, he then disappeared somewhere to pay for them and make sure it was ok to use them. Later research tells me that it cost ¥1500 per person!

With sunset approaching we began together at the place below where the water was covered but scorching hot once we’d removed them. The views from here were the best with a nice panorama of the sea not too far away in the distance.

I’d have been happy with just that place but my father-in-law said there were six baths for us to use. Luckily he is as restless as me when it comes to baths so was happy to move on after about 15 minutes at each one. The next set of baths really were private baths as they were tiny and contained within huts that each represented one of the four seasons not that I could really tell any difference.

The first one was not open so we alternated solo-style between the other three as the sun set on this particular late December day. 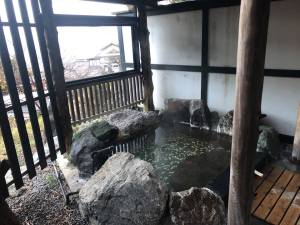 The final bath was located within the hotel complex with no people in sight. This particular onsen is regarded as a five-star source inn which I think just means that the heat is generated from the ground deep beneath. Something like that anyway! 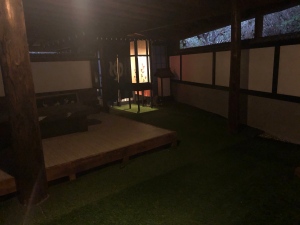 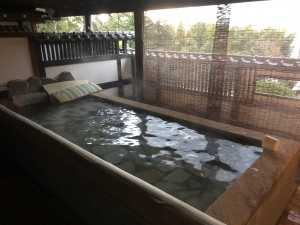 The clear, transparent waters of this onsen are supposed to be good for skin disease, muscles pain, coldness, bruising, fatigue, arteriosclerosis, neuralgia and a load of other things which I don’t really know the meaning of!

After I’d been to the Soldier Temple in Fujieda city on day one, I had a couple of days with just my in-laws during that weird bit between Christmas and New Year but my wife joined up with us (having been working back in Tokyo) in the evening following that private hot spring bath, and the next morning we took Momiji to Sakura-no-sato which is a lovely park located on the other side of the beautifully-shaped Mount Omuro. 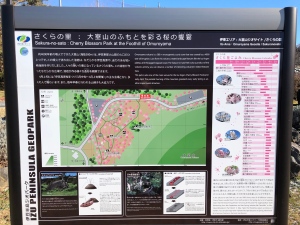 Whilst I’ve been to the mountain I had never visited this park which is at its peak beauty during the cherry blossom window. There was a light frost on the ground, clear blue skies and mountains in all directions including the majestic Mount Fuji. 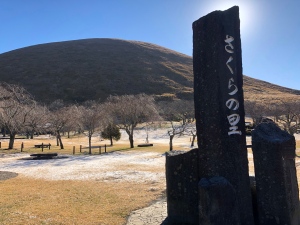 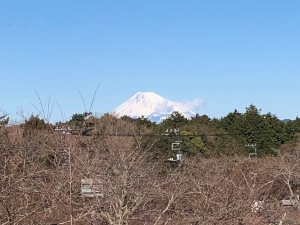 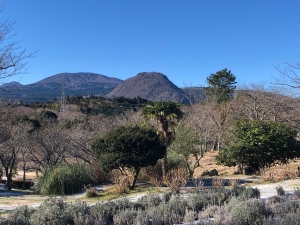 Just over the road from that park is a woods with a walking trail which I think goes all the way to Lake Matsukawa-ko though one can’t be too sure when some of the signs have eroded away. One to try out in the future maybe but this time we were not equipped for it and were also restricted by time. 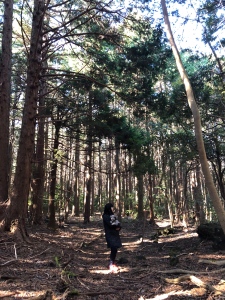 Later that same day I took a local walk and came across this mikan vending machine selling half a dozen of these Japanese oranges for just ¥200. Further proof that just about anything can be sold from such a machine in Japan.

Komuroyama is a place I never ever fail to visit on any trip to Izu and on my first morning I took Momiji for a walk thinking I’d probably have to carry her up most of the way as she often resists a bit. Not this time though as she was in a very energetic mood and walked the whole way up to the top before we descended via Dinosaur Space; an area full of over a dozen big dinosaur sculptures.

Another favourite place that I nearly always seem to visit each time is Lake Ippeki-ko as we’ve got to mix things up a bit for Momiji. This place is always peaceful, tranquil and easy enough for anyone to do a circuit of the lake. 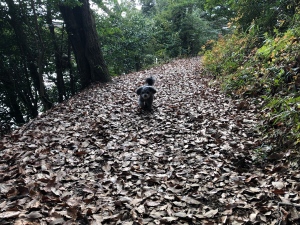 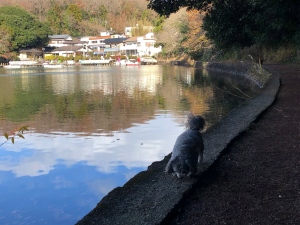 Less than 24 hours after my wife had joined us all, and we parted ways again as I headed back to Tokyo to meet some ‘Back To The Future‘ stars at the HollyCon #18 convention in Shiba-Koen Park. There was time for a final bath in the house though which is always a nice way to spend an hour when I’m staying here. 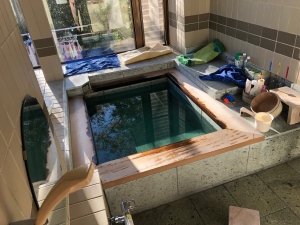 It also brings this story full circle as it started with details of a public (but ultimately private!) onsen and now finishes with a private bath of a different nature.

2 Responses to An Old Style Public Onsen All To Ourselves