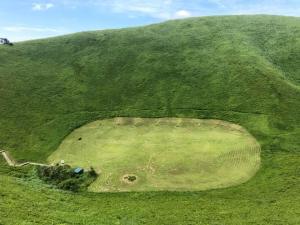 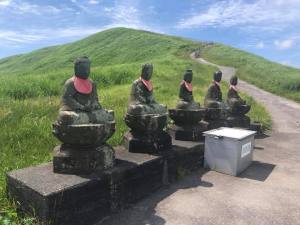 There are two popular tourist mountains in Ito on the Izu Peninsula. Mount Komuro is famed for its beautiful sea of pink tsutsuji (azalea) flowers in late April or early May each year, and then there`s Mount Omuro which is the more picturesque postcard-perfect volcano. The former is one that I`ve been to a countless number of times as it`s more convenient and far more expansive but the latter takes a bit more effort and planning.

Whilst I have been in the park behind Mount Omuro a few times in the last few years I haven`t been up it since our inaugural visit in Autumn 2017 which is longer ago than I initially realised! Looking for something different to do on our holiday to Izu back at the end of June, we decided to revisit this beautifully-shaped mountain using local buses.

Such public transportation isn`t so common in Ito so planning ahead was vital. The journey turned out to be a fairly straightforward 20-25 minute bus ride (500 yen) door-to-door (almost) but it did mean we arrived before it was even open so had to wait around for the chair-lift to start operating at 9am. Subsequently we were the first people to go up the mountain (other than the staff working at the top), and in a land of so many rules I was quite surprised that we could still just carry the dog on our lap. 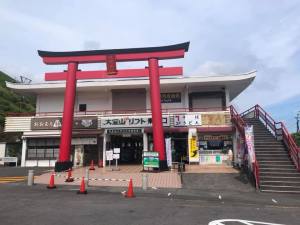 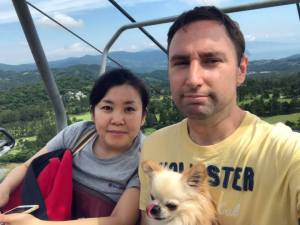 Since our last visit the price of a return trip (one way trips are not possible by the way and no one asks to see your ticket on the way down) has increased from 500 to 700 yen. There is a warning that jumping off it is strictly prohibited so don`t even think about it!! 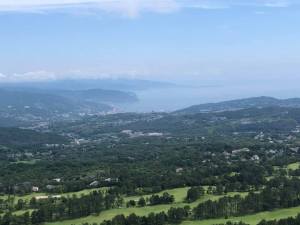 It is a 580 metre ascend to the summit which still surprises me as I tend to just think of it as a green hill! Its height is a little shy of Mount Takao (599 metres) in Tokyo. Whilst that one has many options for ascending it, there is only one way to (legally) reach the rim of Omuro-yama and that is via the chair lift. It should be noted that it`s not in operation when it`s too windy. 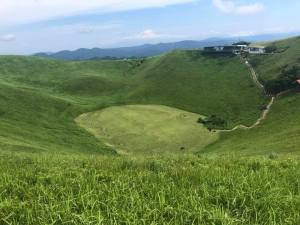 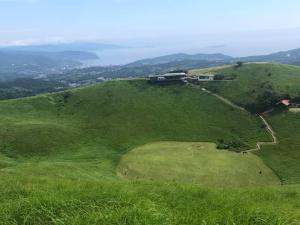 Despite having seen it before it was still something of a eye-opener to be reminded that it`s not a rocky and watery crater but lush, greenery. I`d love to look down on a football match being played there! It is actually used for sport in the form of archery which had me quite interested as at that point I still thought I had a chance of being able to use my Olympics archery tickets. One week later and that idea went up in smoke as the IOC and Japanese government decided that no fans would be allowed at Olympic events in and around Tokyo! 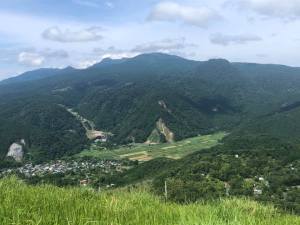 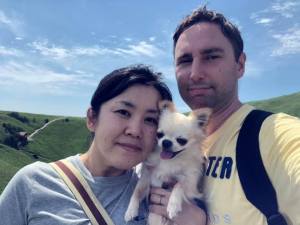 The crater is about 300 metres in diameter and takes a leisurely 30 minutes or so to circle on foot via the one kilometre footpath. This is a mountain where any kind of footwear is suitable for walking round the rim of this extinct volcano. It`s best done on a clear day and this was a beautiful hot one. 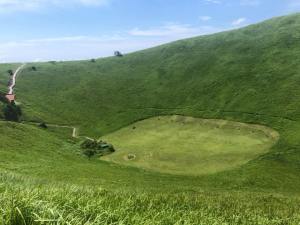 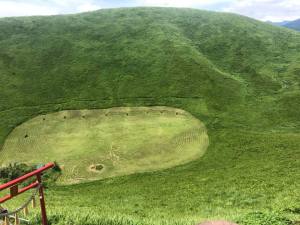 Admittedly, the views weren`t quite as good as four years back as we were unable to see Mount Fuji but the closer Oshima Island was visible. None of that really mattered though as our eyes were only on Maron which was the reason we went there. Dogs are supposed to be kept on their lead but as there was no one around we let him go free to wander the path and greenery. 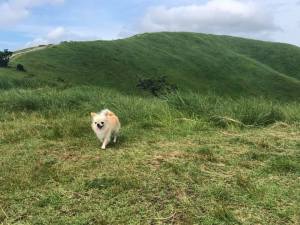 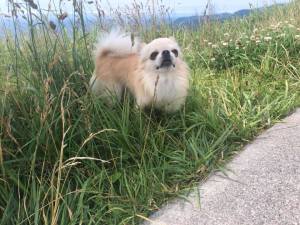 It would be easy to think you`re in another part of the world at times but then you encounter the jizo and buddha statues half way round. 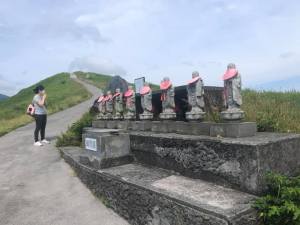 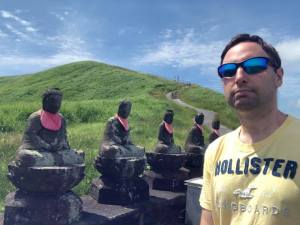 The ultimate view of Omuro-yama would be from the air looking down on the picturesque and beautifully shaped volcano but we had to make do with these shots of us standing behind a sign in front of the ocean. It`s not a place we need to visit every time we go to Izu but now we know it`s quite easy to go by bus we will hopefully go a bit more than once every four years! 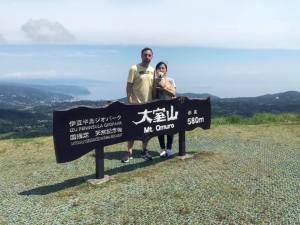 A Leicester City fan teaching English in Japan
View all posts by tokyofox →
This entry was posted in Japan Travel and tagged are dogs allowed on Mount Omuro, getting to Mount Omuro by bus, how tall is mount omuro?, Komuroyama Tsutsuji flower Festival, Mount Omuro, Omuro-yama chairlift, Omuroyama Volcano, things to do in izu, things to do in shizuoka. Bookmark the permalink.