The number of international movies to have been filmed in Melbourne is quite limited so it’s quite amazing that two of them have been ones featuring Nicholas Cage. First there was ‘Ghost Rider‘ (2007) and that was followed just two years later by ‘Knowing‘ whereby he plays an astrophysics professor at the Massachusetts Institute of Technology (MIT).

Camberwell High School (100A Prospect Hill Rd, Canterbury, VIC) appears from the very start of the movie as it portrays William Dawes Elementary School. First, it’s shown in 1959 as a ceremony is held for the burial of a time capsule. 50 years later and it’s opened whereby the contents are distributed to the kids.

Caleb Koestler is the benefactor of a page of seemingly random numbers which he passes to his father John Koestler (Cage) who notices a sequence relating not only to many past disasters but a few future ones too. He sets out to prevent the ultimate catastrophe in a movie that turned out to be far more interesting than I initially thought it would be. The school is a 20 minute walk east of Camberwell Station and one should of course proceed with great care when in such an environment. CGI was used to change the exterior appearance slightly. 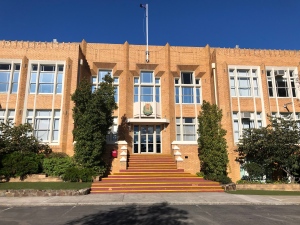 The Massachusetts Institute of Technology (MIT) where Koestler works is none other than Melbourne University complete with Autumn foliage and falling leaves. This appears around the 15 minute mark and also features Australian actor Ben Mendelsohn. I’m not sure how accurate my match-up is here as I was basically just passing by the place en-route to the cemetery in Cage’s other Melbourne film.

Melbourne Museum (11 Nicholson Street, Carlton ) is where Koestler meets Diana (Rose Byrne) on 50 minutes. Things have been moved round the museum a fair bit (or maybe the production crew changed things!) since filming took place but the 18.7 metre male Pygmy Blue Whale skeleton still remains near the entrance. It was beached near Lorne (Victoria) on 5th May 1992 and is the largest animal displayed in the museum. Entrance for adults is $15 for adults.

With the unwitting help of his son, Cage’s character is able to get acquainted with Diana who is the daughter of Lucinda, the girl who made the the Nostradamus-like predictions back in 1949. The pair go for a coffee at Southbank where Koestler admits that their meeting was actually not by chance. This shot was actually a mix of the Docklands area in Melbourne behind Diana and Queens in New York. Movie magic eh!

The corner of Collins Street and William Street becomes Lafayette and Worth streets in New York City on 57 minutes having been shut down for a weekend during filming.

It’s amazing how many American cities Melbourne can stand in for in this film! Parliament House appears on 111 minutes as “Boston” with its citizens running in fear and panic as the world descends into anarchy from the pending disaster. Sadly, part of this building was under construction when I was there in March this year.