Parks became a very common place for me to visit during the lockdown period (known as State of Emergency in Japan and technically not even a lockdown!) as I sought a bit of greenery when getting some fresh air on my daily walks. Whilst nature may not be so prominent in this particular park (as is the case for many parks in Tokyo), the contents of it are pretty interesting.

This seems like a very niche sign: "Danger. No climbing on top of the unicorn's head" pic.twitter.com/0WWlV1NS0P

News of a unicorn made my ears prick up as I thought it sounded like it could be something to feature in the ‘Interesting Japanese Playground Structures‘ (IJPS) series! It turned out it wasn’t really a playground ride but more of a statue. Not just one statue though but a small collection of them. Furthermore, it was all part of a German Park that just happened to be within close proximity to the Tokyo Fox Global Operations Centre in Itabashi ward.

A day or two later, I went to investigate what is known as Kaiserslautern Park. Seeing this name instantly brought a smile to my face as I never expected to see such a name in Tokyo. Kaiserslautern is located around 100 kilometres from Frankfurt in the south-west of Germany, and since 1988 they have had a co-operation agreement with it’s sister city Bunkyo which is where this park is located.

This fairly small concrete recreational area is actually in a corner of Kyoiku-no-Mori Park and was named Kaiserlautern Square in 1993. This sister city co-operation agreement began with the aim of contributing to world peace as well as friendly international relations and mutual understanding. 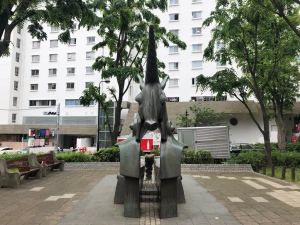 By contrast, the city of Kaiserslautern possesses the largest Japanese garden in Europe and also hosts an annual summer matsuri festival. The Japan football team were even based in Kaiserslautern during the 2006 FIFA World Cup in Germany so the connection goes much further than simply being sister cities on paper.

The sculptures installed in the square are by husband and wife Gernot and Barbara Rumpf, who are of course from Kaiserslautern. The theme is “an invitation to mythical space” and legendary European creatures are prevalent. The einhorn (unicorn) is what brought this place to my attention and is undoubtedly the feature point of the park. It’s ok to climb on the unicorn but not on the head!

The fisch (fish) is pretty cool too and one that even I climbed upon. 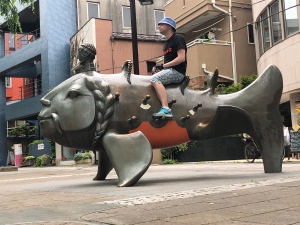 The other two sculptures are the much smaller ammonit (ammonite) and schnecken (snails).

Before #Osaka, the last Japanese woman in a grand slam tournament semi was Kimiko Date (1996). @thetokyofiles tweeted last week that she owns a German bakery called Frau Krumm. I went to check it out quickly whilst working in Ebisu yesterday! pic.twitter.com/8jx80XZv84

Tokyo German Village in Sodegaura (Chiba) came up in my research which I do recall one of my students going to a few years back. She brought me back a pamphlet of the place. It’s advertised as a theme park that explores German rural life with a petting zoo, beer garden and train plus games and shops.

The final German reference relates to ジャーマン 通り(German-dori Avenue) in Omori, just a few minutes south of the Omori-Kaizuka shell mounds, which was named after the German School of Tokyo-Yokohama that was located on the road from 1934. Due to a rise in the number of students it moved in 1991 to bigger premises back in Yokohama where it was originally founded in 1904.

Bonus: Way back in the Spring and Summer of 2003 I went on an exchange programme whereby I lived and worked in Hamburg in order to get some European works experience. I worked (I say worked but in truth there wasn’t actually much work done) for a small I.T. company in the city whilst doing a home-stay with a local family out in the suburbs. 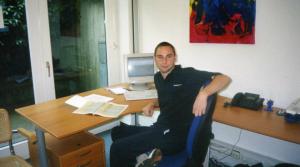 Hamburg doesn’t possess a load of amazing sights as such but it is a cool place for just living and hanging out with friends and there were some great parts to explore in between time at the office and host-family time.

As I’d been provided with a free travel pass for the whole city, it was possible to explore much more of the city (and beyond) than I would’ve done without it. Other than drinking, the memorable highlights included day trips to Kiel and Lübeck in the north.

Of course I had to go and see some top-flight Bundesliga action. The season was coming to an end so I only managed to get to a solitary Hamburger SV game and was sadly never able to attend a game of hipster club FC St. Pauli.

The #Bundesliga returns this weekend!

Together with four friends, we had a long weekend in Berlin which was the number one travel moment of my time in Germany as it was a city I really wanted to visit. I absolutely loved the vibe and feeling of such a historical city and would return to it about eight years later. 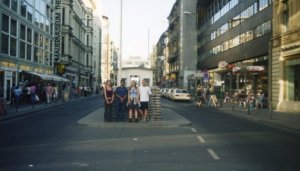 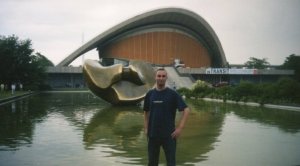