Alphabet Dating In Japan With My Wife Who Was Completely Unaware Of The Task At Hand! (S01E04: P-T)

When I heard this idea on the radio a few years ago I thought it might be something that I could try as a way of motivating myself to go to some places with my wife that I’m usually not too interested in. I did think of suggesting it to her and then taking it in turns to come up with things to do for each letter but I thought she would dismiss it as a silly idea straight away so decided to keep it secret.

It would be quite easy to do an A-Z of dining out experiences so I decided that should be limited to only ten…..which is probably still too many! It was fun thinking up ideas for each letter but reality is a different matter altogether! Of course there are always going to be better and more interesting things to do for each letter but this is what we did for part four of this series…

A double header of P’s in the build-up to Christmas starting with these Harry Potter themed Christmas trees in the Marunouchi area followed by pizza. For someone who has only ever seen the first Potter film this was quite a nice themed tour of things loosely related to the franchise. 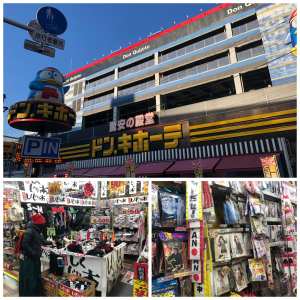 A difficult letter to do but then I passed by a branch of this variety goods store one day and I realised I had something to do for the letter Q. These stores are usually big places consisting of multiple floors of random goods. It’s quite difficult to leave this place empty handed and this particular outing was no different as I got some unsold Tokyo 2020 Olympic merchandise.

The intention had been to go to Jiro Ramen which is famed for its big portions but the queue outside was so long (even at 4pm on a Saturday afternoon) that we decided to go a few metres round the corner to Tonchin. I didn’t realise it at the time but we had already done ramen in this A-Z challenge (it was for the letter E) which is not really ideal but never mind!

All those far more glamourous and famous locations like Shibuya or Shinjuku but it was this place just over the border in Saitama where we ended up! In a way this is what the A-Z series (exploring unknown places and experiencing new things) is all about as it was Rina’s idea to go here which worked out nicely for this series as S was the next letter. A rather unremarkable place and not too much of interest for me!

After Japanese food the cuisine we tend to eat the most when dining out is Thai. This letter was quite an easy one to do as there is a local Thai place just round the corner from us which is most useful when neither of us want to make anything. On this particular occasion we bought three dishes including my regular Gapao rice.

Click here to read ‘Alphabet Dating In Japan With My Wife Who Was Completely Unaware Of The Task At Hand! (S01E01: A-E)’

Click here to read ‘Alphabet Dating In Japan With My Wife Who Was Completely Unaware Of The Task At Hand! (S01E02: F-J)’

Click here to read ‘Alphabet Dating In Japan With My Wife Who Was Completely Unaware Of The Task At Hand! (S01E03: K-O)’

8 Responses to Alphabet Dating In Japan With My Wife Who Was Completely Unaware Of The Task At Hand! (S01E04: P-T)